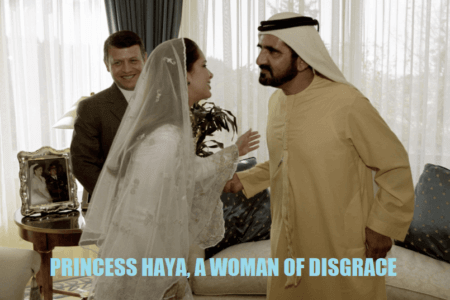 King Abdullah of Jordan, who is the half-brother of fleeing Princess Haya bint al-Hussein, the sixth wife of Dubai’s ruler Crown Prince Sheikh Mohammed bin Rashid al-Maktoum has assigned his relatives to negotiate the anticipated divorce of his half-sister with the ruler of Dubai. According to sources, Sheikh Mohammed bin Rashid al-Maktoum may negotiate fairly to end the marriage on condition that his children are returned to him. Analysts say, this high-profile fleeing would jeopardize Jordan’s ties with the United Arab Emirates, as King Abdullah’s half-sister has fled Dubai after swindling millions of dollars with the help of her African counterpart.

Abdullah, already preoccupied by another affair regarding his aunt, Princess Basma, whose husband is accused of corruption, has tried to distance himself from this new hornet’s nest. He knows that any out-of-place remark could hurt the status of 200,000 Jordanians who work in the UAE, erode the financial aid he receives from the country and shakes up the fragile ties between Jordan and the Gulf states. Last month the king praised his host, Mohammed Bin Zayed, during a joint military exercise with the UAE, and named a division after him, but the Dubai ruler wasn’t at these ceremonies.

Analysts on Middle Eastern affairs say this particular case of fleeing may also result in extreme bitterness between Jordan and the UAE.

Tensions between the two countries may rise regardless of the royal couple’s problems. Recently Jordan said it planned to name the foreign ministry’s director general as ambassador to Qatar and he hoped to see a new envoy from Qatar in Amman. That was already seen as a challenge against Saudi Arabia, as well as Bahrain and Egypt, which two years ago had imposed sanctions against Qatar and cut off diplomatic ties. Jordan refused to join the full boycott and only downgraded its diplomatic representation and since then has stood up to heavy Saudi pressure to fully cut off ties with Qatar.

Jordan’s firm stand on this issue has brought another bonus. In August Qatar provided Jordan with generous support of $500 million and said it intended to invest a few billion in the kingdom and let 10,000 more Jordanians work there. Jordan, which needs any and all aid due to its regime-threatening economic crisis, pays in political cash when on the one hand it puts its political independence on display before Gulf countries, which could exact another price in relations with the Saudis and the UAE.

Qatar gets involved into the Princess Haya case

According to sources, Qatar is trying to take full advantage of the current feud between Princess Haya bint al-Hussein and her husband, Crown Prince Sheikh Mohammed bin Rashid al-Maktoum. Before leaving Dubai, Princess Haya reportedly has made several documentaries which are filled with various contents against the UAE royals. It is learnt that these videos were secretly made by documentary makers from Qatar, Egypt and India.

Princess Haya bint al-Hussein came under criticism from the family of Crown Prince Sheikh Mohammed bin Rashid al-Maktoum as she swindled millions of dollars with the help of an African scamming racket.