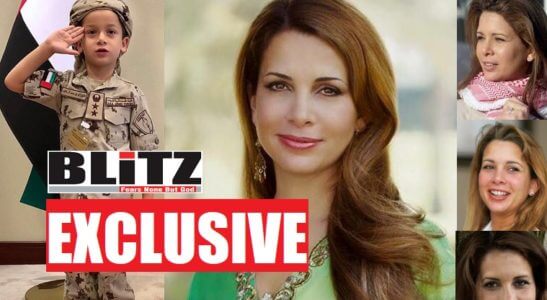 As questions have already been raised about the identity of the real father of Princess Haya bint al Hussein’s son Sheikh Zayed, the fleeing Princess is worried as such exposure would totally tarnish the artificial image that she has built during the past 15 years being the wife of Sheikh Mohammed bin Rashid Al Maktoum.

Sheikh Zayed was born on January 7, 2012, from one of Haya’s ex-boyfriend, who too was her bodyguard of British origin. She has always been worrying about the real identity of Sheikh Zayed been exposed, as the Dubai ruler is not his biological father.

Another source claims, Sheikh Zayed is the son of one of Princess Haya’s college mate, who has an interest in horseracing.

Princess Haya has two children – a daughter and a son.

There is no information as to whether there had ever been any DNA test of Sheikh Zayed to determine the identity of his father.

Meanwhile, she has been repeatedly contacting Prince Charles and Princess Camilla Parker as part of her plan of dragging this royal couple involved in her favour to have favourable result during the July 30 hearing of the divorce case in the High Court. Few of her friends in Britain also are contacting several media outlets in Britain as well as other countries in the world with the request of publishing reports and opinion editorials demonizing Sheikh Maktoum.

Princess Haya bought the £85 million Green Palace mansion near Kensington Palace in west London from Indian billionaire Lakshmi Mittal in 2017. One of the main reasons behind buying this posh property was Princess Haya’s secret desire of meeting her men and indulging into illicit sexual activities. Few of the domestic helps at the Green Palace though are aware of Haya’s “indecent activities” inside the mansion, they did not have the courage of disclosing this to anyone. She was even silencing few of the domestic help who had access to her bedroom by tipping them heavily, to make sure, her illicit activities did not reach Sheikh Maktoum’s attention.

She was stealing money from the Dubai ruler