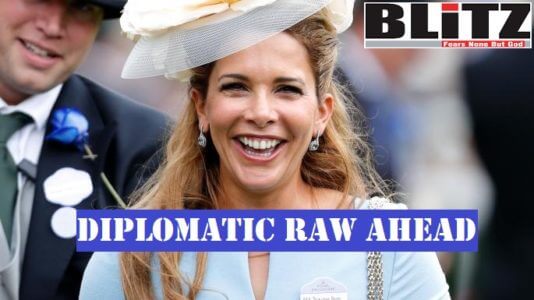 As has been predicted by this newspaper for past few days, Jordanian King Abdullah, who is the half-brother of controversial Princess Haya Bint Al Hussein has taken sudden moves in deepening relations with Qatar as Abdullah fears of the possibility of deterioration of existing relations between Jordan and the United Arab Emirates. For weeks, Princess Haya Bint Al Hussein, wife of Dubai ruler Sheikh Mohammed bin Rashid al-Maktoum has been living in a multi-million-dollar property in London and has been waiting for extracting a huge amount of money from Sheikh Maktoum by blackmailing of “disclosing” many “secrets” about the UAE royal family.

It may be mentioned here that, Princess Haya fled Dubai with the goal of marrying her bodyguard turned boyfriend who was employed by UK Mission Enterprise Limited, a London-based security company owned by the Dubai government, which is based in London and has a turnover of £5million, according to the latest accounts filed at Companies’ House. Abdulla Shakeri is the Managing Director of this company.

Princess Haya’s half-brother King Abdullah of Jordan is clearly sensing the possible bitterness which has already started between his country and the United Arab Emirates as Haya has cheated Sheikh Mohammed bin Rashid al-Maktoum both in her marital life as well financially.

It was also reported in the media that Haya’s son Sheikh Zayed is not the biological child of Sheikh Maktoum. Instead, Zayed was born from one of Haya’s ex-boyfriends.

Sensing the possible bitterness, King Abdullah has abruptly deepened relations with Qatar and it is expected that Amman and Doha are going to exchange ambassador soon – two years after Amman had recalled its ambassador to Doha, as Saudi Arabia, the United Arab Emirates (UAE), Bahrain and Egypt severed ties with the Gulf state in June 2017.

On June 24, the local army radio quoted government sources as saying that Amman has officially asked the Qatari government to consider the current secretary-general of the Foreign Ministry, Zaid al-Lawzi, as its next ambassador to Doha. Qatari media reported June 27 that Doha has proposed Sheikh Saudi bin Nasser bin Jasem as its ambassador to Amman.

The restoration of full diplomatic ties follows a number of goodwill gestures between the two countries that included a high-level visit April 17 by Qatar’s Deputy Prime Minister and Minister of State for Defense Affairs Khalid bin Mohammed Al Attiyah to Amman, where he met with King Abdullah.

Jordan’s Minister of Foreign Affairs Ayman al-Safadi told a local Jordanian TV station June 14 that his country’s relations with Qatar are “distinguished and fraternal.” He added that there is consultation between the two countries on all issues of mutual concern.

The decision by Amman to restore normal diplomatic ties with Qatar was seen by analysts as reasserting Jordan’s independent foreign policy course and desire to keep away from inter-Arab squabbles. They also considered the timing of the move as important, underlining a period of lukewarm diplomatic relations between Amman and Riyadh over differences in visions regarding the US proposed regional peace plan.

Jordan rejects any proposal that deviates from the two-state solution and is frustrated that billions of dollars in Saudi investments have been delayed since a joint fund was enacted in 2017.

The tussle between Doha and its Gulf neighbors in addition to Egypt took Jordan, which was heading the Arab summit for that year, by surprise.

Amman found itself in the unenviable position of having to choose sides, and it decided to reduce the level of diplomatic representation with Qatar without severing ties.

When Jordan called on the Gulf states to help support its ailing budget following mass protests that led to the sacking of the government last June, Saudi Arabia hosted a four-nation meeting in Mecca on June 11, 2018, that was attended by Kuwait and the UAE in addition to Jordan.

The three Gulf states pledged an aid package worth $2.5 billion in the form of a cash deposit with the Central Bank of Jordan, World Bank loan guarantees for the kingdom, annual support for the state budget for five years and financing for development projects. Aside from a $1 billion deposit from the three Gulf states to support the Central Bank of Jordan, little else materialized from the Mecca meeting.

Around 180,000 Jordanians visited the online platform in the first 30 minutes after it was launched. In April, 2,000 work permits had been issued for Jordanians to work in Qatar while 3,000 others were being processed. No less than 40,000 Jordanians are estimated to be working in Qatar.

In March, Qatari media reported that the trade exchange between Qatar and Jordan witnessed an 18% increase to reach 1.3 billion Qatari riyals ($357 million) in 2018 over the 1.1 billion riyals ($302 million) recorded in the previous year.

The Jordan Times reported March 6 that Qatar had “expressed interest in diversifying its investments in the kingdom and increasing them over the next three years from their current volume of $2 billion to $4 billion, especially in the tourism and financial market sectors”.

While economic benefits are the main driver behind the recent improvement in Jordan-Qatar ties, it is difficult not to politicize that move. Writing in The Jordan Times on April 21, political analyst and chairman of the Amman-based NAMA Strategic Intelligence Solutions Fares Braizat said, “Jordan has very little interest, if any, in being part of any inter-Arab cold war, or wars. The current irrational and unjustifiable cold wars and their active theatres have caused significant economic and financial troubles for Jordan and will threaten the stability of the region for a long time to come”.

Pointing to the recent rapprochement between Jordan and Qatar, Braizat continued, “The Qataris are very interested in working with and in Jordan. The two countries need one another, and they should cooperate more and reinstate ambassadors to contribute to the reduction of tension in the region and be constructive rather than destructive”.

Hasan Barari, professor of political science at the University of Jordan, told Al-Monitor that it has become difficult for Jordan to continue to lower its diplomatic ties with Qatar. He said that Jordan’s ability to push back against the “deal of the century” hinges on two factors. First, a strong domestic front is crucial for any pushback against the proposed deal and second, Jordan’s ability to diversify its foreign ties is a must. “It boils down to one point: Jordan needs to free itself from the restrictions imposed by traditional allies,” he said.

Jordan plans to go beyond

Jordanian King Abdullah not only is desperate in forming a nexus with Qatar to counter any possible pressure from the United Arab Emirates and its top allies such as Saudi Arabia, Kuwait and Bahrain, it also is going to deepen its relations with Turkey and even Iran.

It may be mentioned here that; King Abdullah and his half-sister Princess Haya are diehard supporters of Palestinian terrorists and Hamas. Haya had made public statements in defense of Hamas and had demonized Israel.