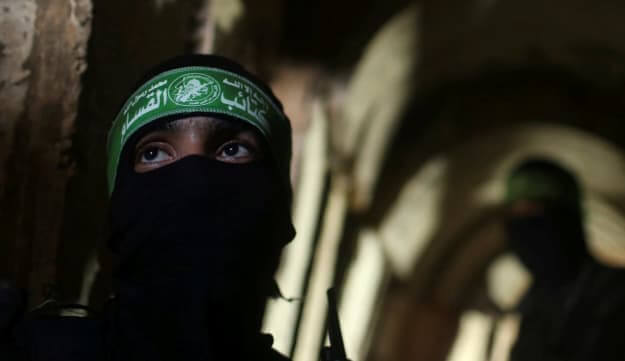 The following overview was written in connection with a Middle East Forum conference, “Qatar: U.S. Ally or Global Menace,” taking place in Washington, D.C. on Feb. 6, 2019. To watch it live-streamed, click here.

Despite international criticism, the small peninsula state of Qatar has long played an outside role in harboring Islamists, including violent jihadists — whether the political leadership of Hamas, or the “unofficial Embassy” of the Afghan Taliban.

The recent decision by several Arab States to designate a number of Qatari-hosted Islamists as terrorist entities has once again raised the issue of Qatari’s support for both violent and non-violent Islamists. And perhaps no individual sheltered by Qatar is as notorious or influential as the nonagenarian cleric Yusuf Al Qaradawi.

Who is Yusuf Al Qaradawi?

Yusuf Al Qaradawi is a Qatar-based cleric, Al-Azhar University-trained Islamic jurist and a prolific writer and scholar. Born in Egypt in 1926, Qaradawi was an early member of the Muslim Brotherhood, who was even imprisoned by Gamal Abdel-Nasser as part of a crackdown following the Brotherhood’s involvement in an alleged assassination attempt. Egyptian hostility to the Brotherhood and its clerics led to Qaradawi’s long-term exile in Qatar, where he now lives as a personal guest and spiritual mentor to the Qatari Emir.

Qaradawi’s global reach would not have nearly the same impact without the aid and support of Qatar’s ruling Al-Thani family, who have served as Qaradawi’s patrons since he was first exiled to Doha in the 1960s and granted Qatari citizenship.

Qaradawi arrived in Qatar during a period in which the small peninsula country was still a British protectorate. Unlike Muslim Brothers who traveled to Saudi Arabia following their expulsion from Egypt, Qatar had no substantial developed religious institutions and, as a result, Qaradawi became nearly the only prominent cleric in a country of mostly Salafi Muslims. As U.S. Ambassador Chase Untermeyer wrote in a 2005 State Department cable, Qaradawi is “the only Islamic thinker in Qatar who matters.”

Qaradawi since played a significant role in establishing the Qatari educational system, leading the Qatari Secondary School Institute of Religions, and later serving as a dean at Qatar University. Qaradawi is also deeply involved with the Qatar Foundation. Nominally independent of the Qatari government, the Qatar Foundation serves as a vehicle for promoting Qatar’s policy objectives and influence and promotes Qaradawi’s brand of Islamism through the Foundation-run al-Qaradawi Centre for Islamic Moderation and Renewal and the Qaradawi Scholarship for Islamic Studies.

Qatar has also long bankrolled many of the media forums that make up Qaradawi’s global reach, including the International Union of Muslim Scholars and the prominent website IslamOnline, which promotes the cleric’s fatwas and publicizes Qaradawi’s work. Qatar also provided Qaradawi with a prominent platform on its state-run satellite television channel Al Jazeera from which he has made some of his most incendiary speeches. Qaradawi has engaged in holocaust denial, the promotion of suicide bombings, and genocidal antisemitism – all broadcast on Al Jazeera.

Qatar’s financial sector has also sought Qaradawi’s name and authority. He has served as an advisor for Qatar Islamic Bank (QIB), Qatar International Islamic Bank (QIIB) and the Qatar National Bank (QNB). All three of these financial entities have been blacklisted by the United Arab Emirates (UAE) because, in part, of their associations with Qaradawi and Muslim Brotherhood entities. For his part, Qaradawi has become extremely wealthy as a result of gifts from the Al-Thani family.

QIB and QIIB are also believed to manage multiple accounts for Qatar Charity, the largest Qatar-based non-governmental humanitarian organization which has a long history of alleged support for terrorist groups, including Al Qaeda. Interestingly, observers note that Qatar Charity’s funding choices for jihadist efforts correlates with the list of “liberation” movements backed by Qaradawi.

Qaradawi is also a participant and prominent member of the Global Anti-Aggression Campaign (GAAC). GAAC is a union of Salafi and Muslim Brotherhood leaders originally founded in 2003 in organized opposition to the U.S.-led Iraq war. GAAC general secretary Abdulrahman al-Nuaimi is a Qatar-based and U.S. Treasury Department-labeled Specially Designated Global Terrorist, because of his alleged financing of Al Qaeda. He is also at the center of Emirati and Saudi allegations of Qatar terror finance.

Contrary to those who have argued that Qaradawi represents a moderate strain of Islamism, Qaradawi has long endorsed violence as a tool for achieving Islamist objectives. While he is perhaps most famous for his 2001 fatwa condoning Hamas suicide bombings, and his 2004 fatwa authorizing suicide bombing by Muslim women during the height of the 2nd intifada, Qaradawi has also embraced violent “liberation” movements in the Palestinian territories, Sudan, Eritrea, the Philippines, Afghanistan, Somalia, and Kashmir.

In addition, Qaradawi endorsed a fatwa for the killing of Americans in Iraq, including civilians, during the U.S. occupation; and has encouraged Muslims to travel abroad to fight in civil wars in Syria and Libya. And following the ouster of the Muslim Brotherhood-led government of Mohammed Morsi, Qaradawi also urged violence, stating that those who disobeyed the lawful ruler (meaning Morsi) should be killed.

Qaradawi, however, does more than simply preach violence. In 2008, the U.S. government designated the Qaradawi-led international charitable coalition known as “The Union of the Good” for its role in financing Hamas. The Israeli Security Agency has described the Union of the Good as “the umbrella organization for Hamas and Muslim Brotherhood-affiliated Islamic charity funds.” Union of Good members have been found to support other jihadist groups, including Al Qaeda affiliates.

Qaradawi’s role in the advancement of Islamist thought should not be underestimated. In many ways, it is central to understanding the promotion and expansion of Islamist ideology around the world. In particular, Qaradawi has played a key role in establishing a branch of Islamic jurisprudence dealing with the issues of Muslims living in non-Muslim majority countries (known as Fiqh of Minorities, or Fiqh al-Aqalliyyat), together with another leading Muslim brotherhood thinker Taha Jabir Alwani.

As a result, in the West, Qaradawi is perhaps best known for prominent religious organizations such as the European Council for Fatwa and Research (ECFR) and the Federation of Islamic Organizations of Europe (FIOE). These organizations are predominately led by Muslim Brotherhood operatives who have undertaken to spread Qaradawi and the Brotherhood’s ideology, and to establish the infrastructure necessary to implement it.

The end goal for this effort is perhaps best understood by Qaradawi’s 1995 statement before the Muslim Arab Youth Association (MAYA) in Toledo, Ohio: “Conquest through dawah, that is what we hope for. We will conquer Europe, we will conquer America, not through the sword but through dawah.” Typically translated as “proselytizing”, in the Muslim Brotherhood context Dawahcarries with it a more specific meaning: ensuring Western Islam is Islamist-led.

Qaradawi’s activities go beyond adapting Islamic rulings for Muslims living in Western countries. Rather, Qaradawi established judicial bodies to oversee Islamic jurisprudence to promote and enforce his own Islamist interpretation of Islamic law. In 2004, Qaradawi founded the International Union of Muslim Scholars (IUMS) in Dublin, Ireland with the goal of overseeing and unifying Fiqh [jurisprudence] councils established in both the Middle East and among Muslim communities in the West. The bodies were tasked with enforcing standards in the production of fatwas and the assisting with the engagement of Dawah efforts online and through international satellite programs.

While the IUMS purports to be ecumenical in its treatment of various schools of Islamic jurisprudence, in practice the organization has been dominated by individuals affiliated with the Muslim Brotherhood, including its armed Palestinian wing, Hamas.

Far from serving as a mere religious institution, IUMS has long been used as an instrument for disseminating Muslim Brotherhood policy, which in turn is magnified and carried out by Brotherhood institutions aligned with Qaradawi throughout both the Middle East and in the West. Qaradawi has publicly asserted that IUMS has the influence to incite the Muslim ummah to “rise up”. He cites, as an example of this capability, IUMS’ role in inflaming the Danish Muhammad Cartoon Contest protests, which ultimately resulted in the death of several people. Qaradawi recently announced his intention to retire as the head of the IUMS.

The use of the IUMS as a vehicle for subversive Muslim Brotherhood activities ultimately led Egypt, Saudi Arabia and the United Arab Emirates to designate IUMS as a terrorist organization in June of 2018.

Despite having been banned from entering the United States since 1999, Qaradawi has played an active role in the effort to spread the Brotherhood’s Islamist ideology in the United States. Qaradawi served as one of the inaugural trustees of the Islamic Society of Boston and remained engaged with the Boston-area mosque until at least 2002. The Islamic Society of Boston, founded by convicted Al Qaeda financier Abdurrahman Alamoudi, has been tied to more than a half a dozen terrorists who have been either deported, imprisoned, or killed by law enforcement.

Qaradawi serves as a central node in a network that coordinates Qatar’s relationship with international Islamism. While Qatar provides funding and global media reach, Qaradawi provides intellectual and ideological legitimacy, and the Muslim Brotherhood provides an international network of dedicated Islamist activists throughout the Middle East, Europe and North America.

As a result of his reach, Qaradawi remains vital to Qatar’s attempts to exercise influence among both the Muslim world and in the West. This has made Qaradawi central to the conflict between Qatar and its neighboring Gulf States and explains the unwillingness of Qatar to divest itself of the Islamist scholar despite the pressure being brought to bear.

While in his advancing years, Qaradawi will likely continue to withdraw gradually from public life, the infrastructure he established – funded, hosted and championed by Qatar – will continue serving to promote the Islamist and Qatari agenda well into the future, and will remain a key point of tension between Qatar and its Gulf neighbors.

While Qaradawi, Qatar and the Muslim Brotherhood ought to each be independently worrisome to Westerners concerned about the spread of Islamist ideology; as a trinity of influence, its reach must be recognized as greater than the sum of its parts.

Western countries should cease indulging the polite fiction that Qatar-backed “non-state” actors involved with Qaradawi – such as the Qatar Foundation and Al Jazeera – represent anything other than instruments of Qatari influence. The West should instead require these organizations to identify as foreign agents. Likewise, Western countries should extend terrorism designations targeting the Qaradawi-led Union of the Good to Qaradawi himself, as well as other organizations associated with the Qaradawi network and this aging cleric’s violent, theocratic agenda.

Kyle Shideler is Director of the Counter-Islamist Grid (CIG)