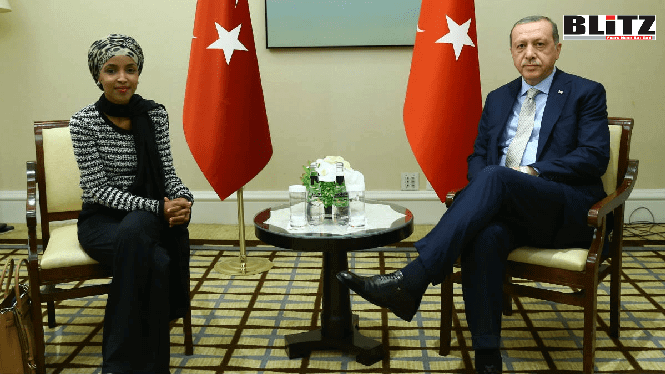 Explosive testimony given in a Federal Court accusing Representative Ilhan Omar of taking bribes from Qatar in exchange for leaking sensitive intelligence and influencing U.S. policy should be investigated by the FBI.

If these accusations are correct, they should serve as a warning bell for the United States and for anyone who cares about the effects of U.S. policy on the world. Selling access to power to the patrons of the Muslim Brotherhood cannot be laughed off as a trivial matter, but must be investigated with the full force of the law.

According to prominent businessman Alan Bender in a legal deposition last month, Qatari spymaster Mohammad Al-Masnad boasted of bribing politicians and journalists across America, and incorporating them into a vast campaign of disinformation and propaganda. Rep. Omar is allegedly the “jewel in the crown,” and actively recruits other elected officials into Qatar’s scheme, Bender said in sworn testimony, revealed by Al Arabiya English.

A certain level of “dirty politics” is a hazard of any government, democracies included. And American democracy is particularly vulnerable, since the U.S. Constitution protects the rights of citizens to petition their officials and lobby for changes. If citizens decide that they can more effectively advocate for change by hiring a professional to meet with officials on their behalf, there is nothing wrong with that. And thus we get lobbyists, who make money from their ability to access politicians and change their minds.

And it is only natural that foreign governments would hire lobbyists as well, or otherwise try to influence elected officials. American policy has tremendous effects across the world, for good and ill. There is too much at stake for a government not to fight for a place at the table. So when Qatar was cut off by its GCC neighbors in 2017— at one point threatening the survival of the ruling regime itself — no one can blame them for trying their hardest to get America on its side.

But we needn’t blame criminals to convict them of crimes. There is a world of difference between persuasion and bribery, which is why offering bribes is just as illegal as taking them. If Qatari agents (or anyone else, for that matter) stepped over the line into bribery, we need to uncover their schemes and punish them.

And we certainly can blame those politicians and journalists who go beyond the usual favor-trading, and sell their legitimate authority for pay. When elected officials choose to accept bribes from a foreign power that does not have their country’s interests at heart, they are allowing their greed to pervert American policy and even to destroy lives. This is particularly true when taking bribes from Qatar, which has a long history of supporting the Muslim Brotherhood, Al Qaida and other violent groups.

If Bender’s accusations are true, Rep. Omar’s offense is even worse. Bad enough to satisfy your personal greed by changing your own votes, or passing classified data, with all the contempt for your constituents that such corruption would imply. But to actively recruit other lawmakers to betray their voters and their country turns you from a mere participant in crime into a conspirator. The FBI must investigate thoroughly—if for no other reason than to remove the cloud of suspicion from Rep. Omar’s head if she is innocent.

The massive Qatari influence operation in the West is becoming more widely understood as time goes on. But we mostly know about the legal, public steps that Qatar has taken. If even small elements of Bender’s testimony are accurate, then there is a whole underworld of criminal corruption still to uncover. The lawsuit against Sheikh Khalid Al-Thani, a member of the Qatari royal family who is accused of mistreating American employees and even ordering them to commit murder, is an important first step.

Bender claims that Sheikh Khalid and his American company, KH Holdings, were important nodes in Qatar’s bribery network. Khalid is currently being kept in Qatar, away from American law enforcement, but his company’s dealings in the United States ought to be an open book to investigators. Any records that can be recovered from or about KH Holdings—money transfers, gifts of property, sponsored travel or vacations—may prove crucial in revealing the web of corruption that Bender alleges. And if public figures are proven to take foreign money to influence our policies, they belong in jail, not in office.

As a country, we depend on our elected officials to uphold American interests first and foremost. If there is any danger of corruption at the highest levels of government, our law-enforcement officials need to expose it to the sunlight and protect the integrity of American politics. Otherwise, the entire world will be at the mercy of whichever foreign power has the biggest briefcase of cash, and the biggest address book of corrupt politicians. If such concerns warrant impeaching a President over, they warrant investigating members of Congress as well—starting with Ilhan Omar.

Oren Litwin is a fellow at Islamist Watch, a project of the Middle East Forum