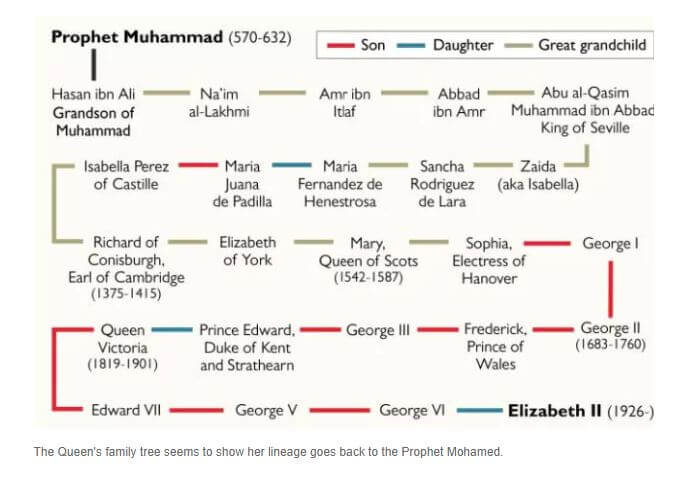 Most of the British people really aren’t aware of a plan fact that their queen, who is the Head of the Church of England, is a direct descendant of the Prophet Mohamed, according to researchers. This revealing story comes with another research based observation of eminent scholar Dr. Daniel Pipes, who has categorically given facts proving, the next heir to the British Crown – Prince Charles had already embraced Islam – years back and he was already practicing rituals of Islam.

In March this year, a Moroccan newspaper claimed it had traced the Queen’s lineage back 40 generations, through English, Scottish and European royalty until it reaches the Muslim kings of Spain and, through them, to the founder of Islam. The revelation, published in the Assahifa Al-Ousbouia newspaper, was greeted with glee in the Muslim world, with some declaring: “Allah save the Queen.” Back in 1986, this claim was aired in Burke’s Peerage, Britain’s bible of aristocratic genealogy. At the time Harold Brooks-Baker, publishing director of Burkes Peerage — which has provided authoritative genealogical records of aristocratic families for over 200 years — wrote to then Prime Minister Margaret Thatcher asking for greater security for the royal family. “The royal family’s direct descent from the prophet Mohammed cannot be relied upon to protect the royal family forever from Muslim terrorists,” he said.

Harold Brooks further said, “It is little known by the British people that the blood of Mohammed flows in the veins of the queen.”

The Queen’s family tree stays in England back to Richard of Conisburgh, grandfather of King Richard III, who died in 1415. However after that — according to the researchers — it moves to Spain, and to Richard’s mother, Isabella of Castile, daughter of Pedro, King of Castile and Leon until 1369. From here, the line is traced to Abbad al-Qasim Muhammad ibn Abbad, the Muslim king of Seville who died in 1042, then on back to Hasan ibn Ali, the Prophet Mohamed’s grandson through his youngest daughter Fatima. From there, it reaches the Prophet who died in the 7th century in what is now Saudi Arabia.

David Starkey, the acclaimed British historian, said the theory was “not at all outlandish,” although it remained unproven. Dr Starkey told The Times of London that the family tree was “rock solid” back to Richard of Conisburgh and there was a lot of intermarriage between English and Spanish royal families (Henry VIII’s first wife, for instance, was Catherine of Aragon, daughter of Isabella I of Castile). He added that the “the medieval monarchs of Spain and the Islamic royal houses were very close and totally intermeshed,” while the early caliphates of Islam were based in Spain. The Umayyed Caliphate, established after Mohamed’s death, reached over 15 million square kilometres from the Caucasus to Muslim Spain, Portugal, Andorra and Gibraltar.

Brooks-Baker connected Queen Elizabeth to Muhammad via Zaida of Seville, a Muslim princess from the 11th century who converted to Christianity and became King Alfonso VI of Castile’s concubine. However, it’s not clear if Zaida was actually related to Muhammad or not.

Abdelhamid Al-Aouni, the historian who penned the article for Al-Ousboue,believes there is a connection, too. Using Zaida as his lynchpin, he traced Elizabeth’s genealogy back 43 generations all the way to Muhammad. The purported connection “builds a bridge between our two religions and kingdoms.”

Zaida was the fourth wife of King Al-Mu’tamid ibn Abbad of Seville. She bore him a son Sancho, whose descendant later married the Earl of Cambridge in the 11th century. But British magazine the Spectator points out Zaida’s origins are ‘debatable’. Some historians believe she was the daughter of a wine-drinking caliph descended from the Prophet. Others say she married into his family.

On October 10, 1986, the United Press International in a release titled ‘Moslems in Buckingham Palace’ said, “Mixed in with Queen Elizabeth’s blue blood is the blood of the Moslem prophet Mohammed, according to Burke’s Peerage, the geneological guide to royalty. The relation came out when Harold B. Brooks-Baker, publishing director of Burke’s, wrote Prime Minister Margaret Thatcher to ask for better security for the royal family. “The royal family’s direct descent from the prophet Mohammed cannot be relied upon to protect the royal family forever from Moslem terrorists,” he said. Probably realizing the connection would be a surprise to many, he added, “It is little known by the British people that the blood of Mohammed flows in the veins of the queen. However, all Moslem religious leaders are proud of this fact.”

“Brooks-Baker said the British royal family is descended from Mohammed through the Arab kings of Seville, who once ruled Spain. By marriage, their blood passed to the European kings of Portugal and Castille, and through them to England’s 15th century King Edward IV.

“The Umayyad Caliphate was an Arab caliphate established after the death of Prophet Muhammad. It was a formidable force and at its peak, ruled over 15 million km2 from the Caucasus (Eurasia) to the Iberia Peninsula (Muslim Spain, Portugal, Andorra and Gibraltar). It was the fifth largest empire in history, governing 62 million people (29% of the world’s population at the time).

“The capital of Islamic Iberia was Cordoba in present-day Spain, which existed between 756 and 929. Cordoba became a cultural and intellectual centre for the Muslims, Christians, and Jews, where advances in science, history, geography, astronomy and mathematics were made. It was also not uncommon that interfaith marriages between Muslims, Christians and Jews occurred during this period.

“The downfall of the Umayyad Caliphate came after the Abbasid Revolution (661-750 CE), the second of the four major Caliphates in early Islamic history. The Abbasid was a dynasty formed by Abu al-Qasim Muhammad ibn Abbad, who was claimed by historians to have been a direct descendant of the Prophet Muhammad through the Prophet’s daughter, Fatima.

“It was through Al-Qasim bloodline that historians believed that Queen Elizabeth shared her genealogy antiquity with.

“Al-Qasim became the ruler of Seville, a territory in Muslim Spain and ruled until his death in 1042. After two successions, his grandson Muhammad Al-Mu’tamid took control of Cordoba in 1071. He was to be the third and last of the Abbasid.

“In 1091, the Abbasid kingdom fell into the hands of the Almoravid dynasty, a Berber imperial dynasty of Morrocco. The Berbers are an ethnic group indigenous to North Africa.

“Al-Qasim had a daughter named Zaida. She was a refugee Muslim, who fled to King Alfonso VI’s court – the Spanish King of Leon, Castille and Galicia, during the attack on the Abbasid kingdom by the Almoravids.

“Zaida converted to Roman Catholicism and married King Alfonso VI. She adopted the name Isabella after her baptism. Together, they had three children who went on to have more descendants.

“Two centuries later in 1352, a descendant of Zaida and King Alfonso, Maria de Padilla had children with King Peter of Castille. The king fathered four children with her, two of whom married sons of King Edward III of England.

“Generations later, Queen Elizabeth was born, bringing with her a colourful lineage of royalty from both the Western and Eastern civilisation.”

Silence of the Buckingham Palace:

As the press release from the United Press International reached a number of British newspapers, most of them contacted the Buckingham Palace for its comments on this crucial issue. But, there had been a total silence from the Queen’s men, which had given much credence to this claim of Queen Elizabeth’s blood connection with the Prophet of Islam.