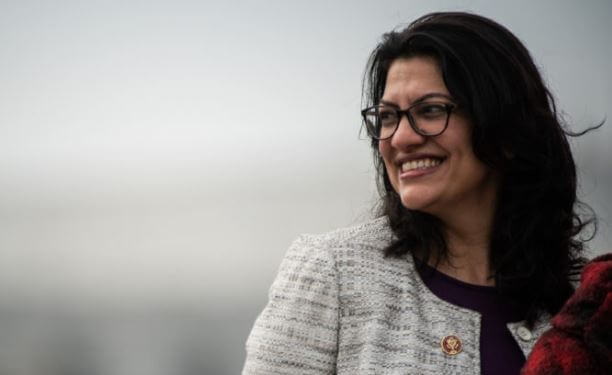 There is an expression that people can be identified by the company they keep.

Rashida Tlaib was elected to the House of Representatives in a district with a constituency whose culture and issues she shares and now projects within the United States Congress.

She celebrated her arrival into the American political stage by draping herself in a Palestinian flag. She says she wants to lead a Congressional delegation to Palestine to expose the human rights abuses against the Palestinians.

Akel, like Tlaib, is a Palestinian-American. All the more reason for American congress people to visit him.

Akel’s crime was selling his Jerusalem property to an Israeli Jew.

This is the racist, anti-Semitic, Palestinian justice system that flies under the radar.

If Tlaib wants to show her fellow Democrats human rights abuses against her fellow Palestinians here it is, inflicted on Palestinian by their unelected leaders.

And if that is not enough, let Tlaib bring her colleagues to visit the twenty eight Palestinians languishing in Palestinian detention camps in Jericho where, according to Human Rights Watch, they are being tortured for the crime of peaceful protest not against Israel but against their own corrupt leadership.

But of course Rashida Tlaib will not address the blatant human rights abuses inflicted on their own people by the PA and Hamas. Better not to spoil a false propaganda narrative with gruesome facts.

Let’s instead examine the friends she keeps.

Standing to the left of the picture is Arab-American comedian, Amer Zahar, who make a not so funny video in 2012 in which he stopped by a Starbucks cafe and, pointing to the building, uttered, “You know he’s Jewish,” before going on to say, “The Holocaust? I didn’t do it,” and “I don’t hate Jewish people” giving a sign with his fingers over the words “Jewish people,” and following it up with “Get out of Palestine.”

On her election, Zahar celebrated with a map of the Middle East saying, “I saw there was something wrong with the map so I fixed it.” Zahar had covered Israel with a sticker saying ‘Palestine.’.

He tweeted on 22 Jan 2016 “Many American Jews are starting to realize that Israel might be their ISIS.”

And on 26 Feb 2016, “To understand Palestine, you must understand European white supremacy. It wasn’t Jews who stole our land, it was white people.”

What Amer Zahar doesn’t understand is that European Jews are a minority in the Jewish state, and they were the victims of real white supremacists in the Holocaust because they weren’t white enough.

The majority of Israels are Jews who fled or were driven out of Arab and Muslim lands. Anti-Semitic Arabs like Zahar.

Rasha Mubarak is President of YDOC and CAIR. She led chants at an anti-Israel event in 2017 shouting “Free free Palestine!”

This anti-Semitic Israel-bashing goes back further. In 201, at a Hezbollah rally, she tells her uncle in Arabic, “Uncle don’t  talk with them. They are Jews.”

But her uncle goes back in front of the camera and says, “Are you a couple of Jews or something?What do you want to know?”

The cameraman asks, “I want to know why are you carrying a Hezbollah flag?”

“Why? Because they are freedom fighters.”

Linda Sarsour, standing between Tlaib and Mukarak, adores Farrakhan of “the satanic Jew that controls everything and mostly everybody” notoriety. Farrakhan said that Hitler was a great man

and that Jews are termites. Praising this Nation of Islam Jew-hater, Sarsour tweeted about him, “The brother does not age. God bless him.”

God bless him because she shares the Farrakhan anti-semitism that says Jews are termites and satanic, and that Hitler was a good man.

Sarsour’s anti-Semitism is apparent when she says, “I want to make a distinction that white antisemitism is something that impacts Jewish Americans its different than anti-black racism or Islamophobia because it’s not systemic.”

Linda Sarsour sees evil when Jews celebrate Hanukkah. She tweeted on 7 Dec 2016, “The Conference of Presidents of Major Jewish Organizations is co- hosting a Hanukkah party at Donald Trump’s hotel in DC?”

Did she think this was a covert pro-Trump covert KKK or white supremacist event?

Anri-racists they are not. They have spent a lifetime propagating antisemitic political fantasies and Islamic ideology.

Rashida Tlaib’s election to the US House of Representatives was not an accident. She represents the political, nationalistic and religious aspirations of a hefty part of her constituency. This comes with a smattering of anti-Semitism disguised as anti-Zionism.

You recognize the people by the company they keep, and increasingly represent.

Barry Shaw is the International Public Diplomacy Associate at the Israel Institute for Strategic Studies. He is the author of ‘Fighting Hamas, BDS, and Anti-Semitism‘ and is a researcher and expert on the anti-Semitism behind every aspect of the Palestinian cause.