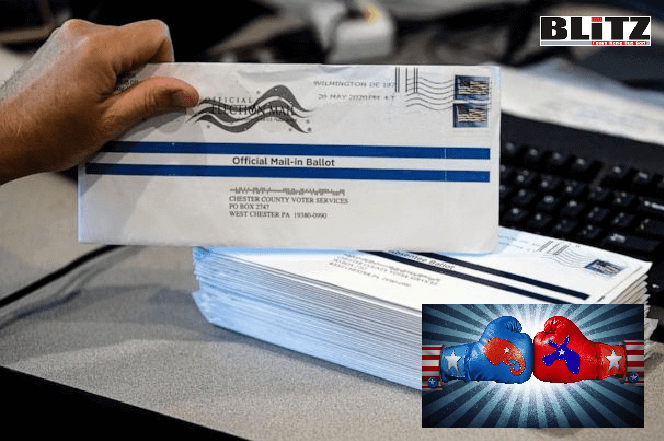 President Donald Trump has said, mail-in voting would lead to electoral fraud. And now his claim is proved to be real. According to the latest news report, as mail-in voting begins in many states, one of battleground Pennsylvania’s three pivotal counties has been thrust into the national spotlight after a number of mail-in ballots were found in a trash dumpster outside a board of election’s office, clearly proving, ballots bearing votes in favor of Donald Trump and Mike Pence are being destroyed by some unscrupulous people, while there even are allegations of replacing ballots with votes in favor of Trump-Pence into Biden-Kamala.

The U.S. Attorney’s Office of the Middle District of Pennsylvania and the FBI’s Scranton Office earlier this week said they “began an inquiry into reports of potential issues with a small number of mail-in ballots at the Luzerne County Board of Elections.”

“At this point we can confirm that a small number of military ballots were discarded. Investigators have recovered nine ballots at this time. Some of those ballots can be attributed to specific voters and some cannot,” the U.S. attorney’s office said in a statement.

According to information, hundreds of Indian-Americans and well as African-Americans are actively working in replacing ballots and stealing votes from Donald Trump and Mike Pence for Joe Biden and Kamala Harris. There also are rumors of Qatar and Iran spending millions of dollars in ensuring the defeat of Donald Trump. Despite India’s economic catastrophe due to coronavirus situation, policymakers in that country are over-enthusiastic in seeing their very own Kamala Harris in particular as the next Vice President of the United States.

Confirming the mail-in vote-rigging, White House Press Secretary Kayleigh McEnany told reporters, “I can confirm for you that Trump ballots, ballots for the president, were found in Pennsylvania and I believe you should be getting more information on that shortly.”

US Attorney David Freed wrote to Luzerne County’s Director of Elections, Shelby Watchilla, that the office first began its review in conjunction with the FBI on Monday at the request of Luzerne County District Attorney Stefanie Salavantis.

Thus far, Freed wrote, the FBI has recovered a number of documents showing military ballots that had been “improperly opened” by elections staff and “had the ballots removed and discarded, or removed and placed separately from the envelope containing confidential voter information and attestation.”

Of the nine military general election ballots discovered that were discarded, seven were outside of their envelopes and had been cast for Trump. The other two were previously recovered by staff and reinserted into what appears to be their appropriate envelopes, which is why they are unable to determine which candidate the ballots were cast for. Three of the nine ballots the office said can be potentially attributed to specific voters, but the other six cannot at this time, Freed wrote.

“Opening a military or overseas ballot, or an absentee or mail-in ballot for that matter, violates the controlling statutes and is contrary to Pennsylvania Department of State guidance,” Freed wrote. “The preliminary findings of this inquiry are troubling and the Luzerne County Bureau of Elections must comply with all applicable state and federal election laws and guidelines to ensure that all votes-regardless of party-are counted to ensure an accurate election count.”

According to authorities, there is no guarantee any of the votes discarded in the dumpster will be counted in the general election, meaning, votes in favor of President Donald Trump are being on-purpose destroyed with the notorious agenda of making Joe Biden, winner.

Investigations are being initiated as President Trump continues to rail against mail voting on the trail.

“Democrats are trying to steal the election,” Matt Wolking, the deputy director of communications and rapid response with the Trump campaign, tweeted.

According to a credible source, Pro-Democratic Party activists inside the civil-military administration as well as electoral offices are actively working in getting Donald Trump defeated in the election, while such notoriety are being funded and patronized by high-profile Democratic Party leaders and socialist-Islamic bloc.