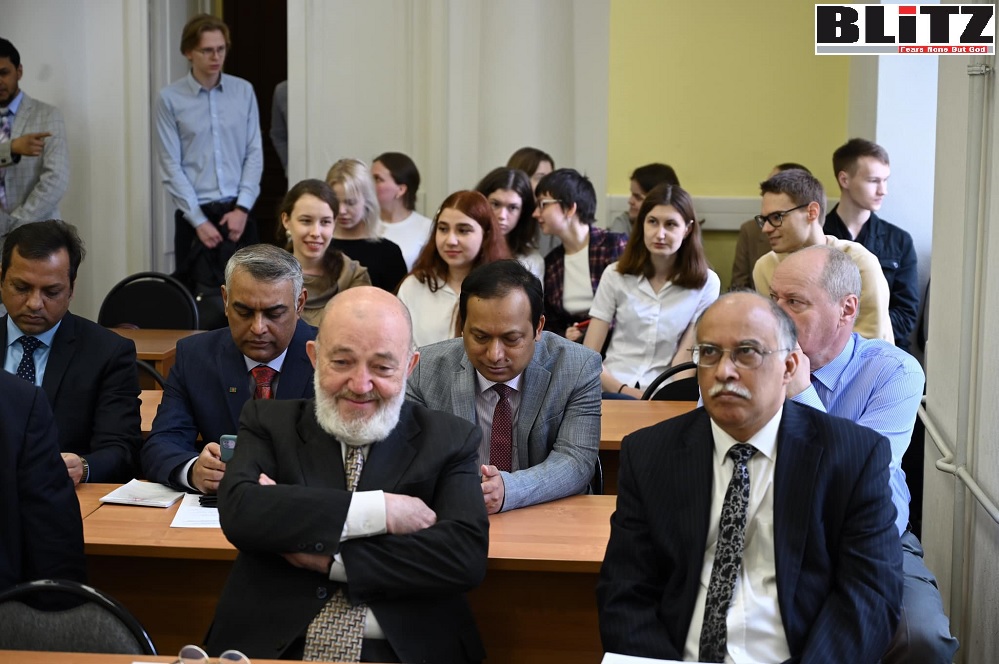 Russian ambassador to Bangladesh, Alexander Mantytskiy during a conference on the Golden Jubilee of Independence of Bangladesh and Birth Centenary of Bangabandhu Sheikh Mujibur Rahman said, Russian companies are successfully implementing joint projects with Bangladesh.

The ambassador said, Russia and Bangladesh developed the bonds of friendship even before the formal establishment of diplomatic relations on January 25, 1972. Moscow raised its voice in the international arena to condemn the gruesome atrocities against the Bengali people and supported their aspiration to create a free and prosperous Bangladesh.

Here is the full text of Ambassador Alexander Mantytskiy’s speech:

Russia and Bangladesh developed the bonds of friendship even before the formal establishment of diplomatic relations on January 25, 1972. Moscow raised its voice in the international arena to condemn the gruesome atrocities against the Bengali people and supported their aspiration to create a free and prosperous Bangladesh.

In March 1972, Bangabandhu Sheikh Mujibur Rahman made a historic visit to Moscow, which resulted in a number of fundamental agreements, including on assistance in restoration of the war-ravaged Bangladeshi economy and infrastructure as well as preparing a special expedition to the port of Chittagong for the operation on minesweeping and clearing of sunken vessels.

The meetings of Prime Minister Sheikh Hasina with Prime Minister and then President Vladimir Putin in 2010 and 2013 respectively, and with Prime Minister Dmitry Medvedev in 2016 opened a new chapter in our political interaction and laid down the modern treaty and legal basis. The dynamic dialogue brings together our Foreign Ministries, Parliaments, Supreme Courts and various government agencies.

Both Moscow and Dhaka attach great importance to upholding the purposes and principles of the UN Charter and multilateralism, working together on the platforms of the ASEAN Regional Forum, Asia-Europe Meeting, the Conference on Interaction and Confidence Building Measures in Asia, the Organization of Islamic Cooperation, Non-Aligned Movement and the Indian Ocean Rim Association. The Bangladeshi accession to the BRICS New Development Bank demonstrated our common commitment to the principles of global governance and equitable world economic system.

In spite of the mounting external pressure, Dhaka perseveres in its fundamental approach “friendship with all, malice to none” and proves to be a time-tested and reliable friend of Moscow, abstaining on the UN resolutions with distorted and politicized interpretation of the Russian military operation in Ukraine. The ability of Bangladesh to stick to its balanced and independent position and shape its own attitude to the unfolding crisis reflects its growing clout in international affairs and finds appreciation from the Russian Side.

On a bilateral level, recently we have made a number of significant achievements. A Group of Deputies on interaction with the Parliament of Bangladesh in the Russian State Duma was created for the exchange of legislative practices with the Bangladesh-Russia Parliamentary Friendship Group, functioning in the National Assembly of Bangladesh.

We have also witnessed a remarkable development in the space area with signing the Memorandum of Understanding between the JSC “Glavkosmos” and “Bangladesh Satellite Company Limited” to cooperate in the creation of “Bangabandhu-2” satellite.

Business ties between our two countries are steadily developing with the support of the bilateral Intergovernmental Commission on Trade, Economic, Scientific and Technical Cooperation. In 2021, the trade volume almost reached three billion US dollars, confirming the status of Bangladesh as the second largest Russian trade partner in South Asia. Bangladesh exports garments and leather products to Russia while importing grain, fertilizers, machinery, various equipment, metals and minerals from our country. Currently both countries are working on broadening the products range. In this respect, supplies of pharmaceuticals, potatoes and other agricultural products from Bangladesh could be a driver for the further growth of mutual trade.

Russian companies are successfully implementing joint projects with Bangladesh. The “Rosatom” State Corporation is building an advanced nuclear power plant Rooppur, thus contributing to the energy security of the country and to the development of national human resources by training Bangladeshi engineers and other personnel to run the plant. The Russian giant “Gazprom International”, engaged in gas extraction projects, is planning to drill two more exploration wells and an appraisal well in Bangladesh. The Russian companies are involved in modernization of local power plants “Ghorashal” and “Siddirganj”, built with the Soviet assistance. The “Rostec” State Corporation provides high-quality equipment for military and civilian use as well as advanced technological solutions.

Over six thousand students from Bangladesh have graduated from Soviet and Russian universities so far. Most of them made successful careers back in Bangladesh and used their skills and knowledge for the benefit of their Motherland. Rich cultural heritage of Russia and Bangladesh invariably arouses immense interest from our peoples bringing them closer together. Dhaka International Film Festival and the Asian Arts Biennale provide an important venue for our cultural communities to enrich each other.

It is inspiring to see the successes of Bangladesh in social and economic spheres. It has achieved impressive growth rates, reduced the poverty level and now is on the way to becoming a middle-income country. I am convinced that further development of the Russian-Bangladeshi cooperation will contribute to bringing prosperity to our peoples and to shaping a more just world order.