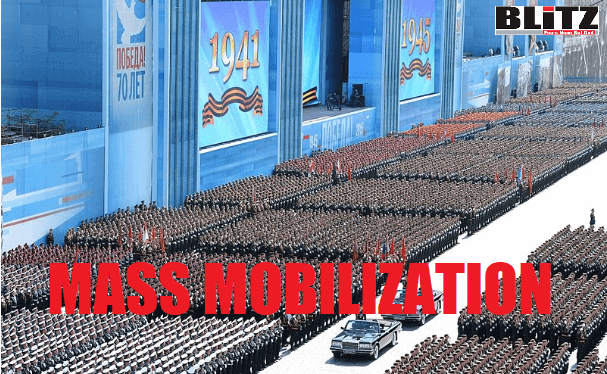 Mass mobilization saved the Russian state on many occasions in past centuries, proving effective against Charles XII, Napoleon I, and Hitler. The Russians are still inclined toward mass mobilization, even though modern wars tend to be more short-term. The large-scale military spending required to sustain mass mobilization will create additional problems for the already embattled Russian economy.

Hints in the Russian media over the past year show that the Russians are set to return once again to mass mobilization. According to this concept, which is threaded throughout Russian history, almost the entire population as well as every sector of the state economy is geared toward an all-out military conflict. Unlike in most other countries, where mass mobilization generally takes place only when a military situation requires it, it is almost a state policy in Russia. It is considered a tradition that, if not upheld, would show weakness to the world.

In the imperial period (until 1917), Russians were called upon to serve in the army at times of both peace and war. This was not exceptional, as most European states in the 19th-early 20th century had a national draft prior to the conflagration of 1914. A national draft and preparation for global conflict were also applied in the 1930s, when Stalin pursued total militarization of Russian society ahead of WWII.

Following the 1945 victory over the Nazis, the USSR had attained a massive level of mobilization, giving the Soviets a greater store of human resources than that of its archenemy, NATO. Soviet mobilization reached the point that the state was sustaining up to five million troops in peacetime. In times of threat, the Soviets could call up six to eight million reservists.

Russia is now considering going back to mass mobilization. The draft system was never, in fact, abrogated after the breakup of the Soviet Union, but there have always been groups within the government advocating changes to the method of military conscription and mobilization. In many ways, the Second Chechen War in 1999 and the invasion of Georgia in August 2008 showed that the Russian military system is no longer efficient. Reforms were started, but none went so far as to change the mass mobilization concept.

Recently, the Russian government has been making contradictory statements and policy moves on the subjects of conscription and the role of civilian industry in wartime. These dissonances suggest a struggle behind the scenes among different factions in the economic and military sectors.

A clear slide toward mass mobilization was visible in the Kavkaz strategic exercise, which was held in southwestern Russia in September 2016. This exercise was a turning point. According to Chief of the General Staff Valery Gerasimov, the Russian Armed Forces tested mobilizing reservists for the first time. Also for the first time since the end of the Soviet Union, Russia’s industrial enterprises were checked to see how they would operate in times of military emergency.

Mass mobilization and the military costs it entails invariably kill Russia’s economy. In characteristically cyclical fashion, what is happening in Russia today is almost identical to what has happened in the past. In the last years of the Soviet Union, the Soviets were lagging behind the West in technology and other important sectors. Oil prices were low and there was high demand for reform. The bulk of the available financial and natural resources were nevertheless poured into a huge military apparatus and the development of deadly technologies. The result was the dissolution of the Soviet Union.

Going further back into Russian history, in the early 20th century, just before the outbreak of WWI, there was a clear demand within the government and the country’s elite for reforms in the empire’s social and economic spheres. However, this was also a period of militarization in Europe, and the upcoming world conflict was visible on the horizon. Though politicians disagreed, Emperor Nicholas II chose to spend large amounts of money on quick militarization. At that time, Russia was economically and militarily backward in comparison to the western European countries. The decision to spend massively on the military spelled catastrophe for the government: the Russian Revolution broke out in 1917.

The preference for mass mobilization is linked to the belief, held by most of the Russian elite, that the country should enjoy military parity with NATO. It also reflects Russia’s unique geography. Russia is a continental power with long borders alongside regions experiencing different levels of geopolitical tension. Russia needs to simultaneously defend its military bases in Moldova, Ukraine, Central Asia, South Caucasus, and Syria.

Some might think this is an overextension of Russian military power. Whether or not they are correct, it is a clear demonstration of the Russian belief that a high militarization level is necessary because of potential threats on many fronts.

The slide toward mass mobilization in Russia is consistent with the trend in which the Russian government follows long historical tradition. There might be some logic to the reanimation of the mass mobilization mentality, but it requires a huge financial outlay that will add yet another problem to Russia’s already large pool of fundamental troubles. This could have a deteriorating impact on Russia’s internal situation in the coming years.