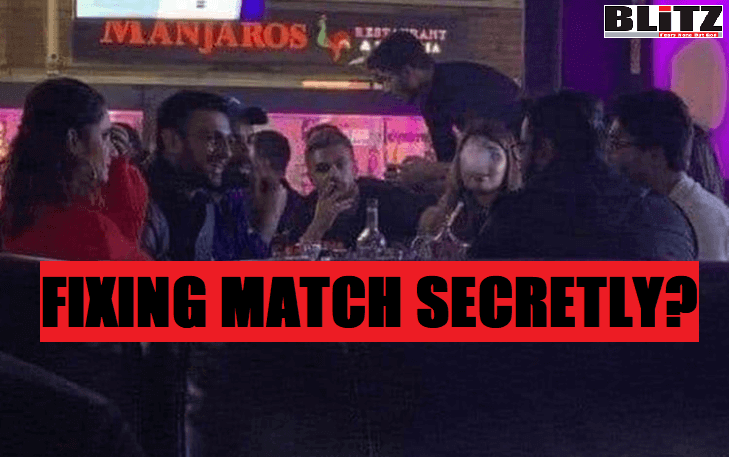 Indians were boasting of Sania Mirza as she was winning Grand Slam title in tennis. But such pride went ashtray soon after she married Pakistani cricketer Shoaib Malik. Possibly most of the fans of Sania are still unaware of the mystery that had forced the marriage between the two sports stars.

Sania Mirza was secretly dating Shoaib Malik for some months and it came to the knowledge of her family immediately after her first case of abortion that was caused by unwanted pregnancy out of Sania’s physical relations with Malik. Since then she became a bit short-tempered and cannot control herself, which is behind Sania’s repeated wrong attitudes shown to her fans and admirers.

During the June 16 cricket match between India and Pakistan, Sania Mirza, her husband Shoaib Malik and their kid were secretly filmed inside a ‘Shisha Bar’ in London.

Mirza replied to the video that seemed to be posted on Twitter by the person who took it and called it a breach of her privacy, and claimed that the group was merely out for dinner.

Pakistani actress Veena Malik replied to Mirza’s response to the clip and criticised the tennis player for taking her child to a “hazardous” environment.

Using her Twitter account Veena, @iVeenaKhan, posted: “Sania, I am actually so worried for the kid. You guys took him to a shisha place isn’t it hazardous? Also as far as I know Archie’s is all about junk food which isn’t good for athletes/boys. You must know well as you are mother and athlete yourself?”

Mirza, @MirzaSania, was quick to respond: “Veena, I have not taken my kid to a shisha place. Not that it’s any of your or the rest of the world’s business because I think I care about my son a lot more than anyone else does. Secondly, I am not [the] Pakistan cricket team’s dietician nor am I their mother or principal or teacher…”

Continuing in another tweet, she wrote: “… to know when they sleep, wake up and eat. Thank you for your concern though means a lot.”

However, screenshots of a deleted version of the tweet read: “… to know when they sleep, wake up and eat. Thirdly and very importantly, if I were you I would be more worried about your kids seeing the ‘not so decent’ magazine cover you have done. You know it could be hazardous right? But thank you so much for being worried. Truly means a lot.”

Veena also tweeted: “Great to hear that you didn’t take your kid there. Oh, did I mention you are a dietician or mother of the Pakistan team? I said you are an athlete and you must know how much fitness is important for athletes. Also, aren’t you a wife of a cricketer? You should take care of his wellbeing. Isn’t it?”

After Mirza deleted the tweet that mentioned Veena’s magazine cover shoot, Veena posted: “Have some guts and don’t delete your tweets. Fortunately, the technology has progressed so much that people can’t deny their acts. Oh the magazine’s cover you mentioned had morphed images. Also I can bring up all the controversies you have ever had but I would rather not divert the discussion.”

The discussion ended with Mirza blocking the actress. After which, Veena, along with a screenshot of her blocked account, tweeted: “Okay so this happened. First, she tweeted then deleted that tweet right away and blocked me. I mentioned my concerns in a very civilised, calm and composed manner. It could have been a healthy debate.”

In the ‘Sheesha Bar’ few more Pakistani cricketers were also present. The unanswered question is, what those cricketers and a controversial Sanis Mirza were doing there in addition to their addiction to Sheesha? Was it a secret negotiation of match fixing?