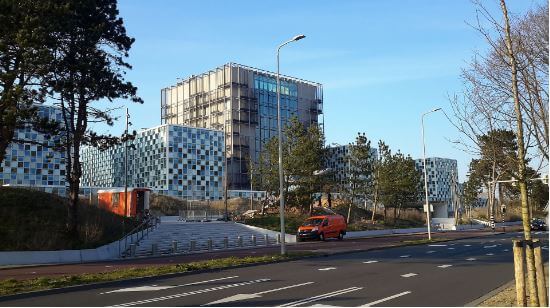 Concerned over repercussions threatened by the US, judges of the International Criminal Court (ICC) in the Hague denied the request of the court’s chief prosecutor, Fatou Bensouda, to investigate war crimes allegedly committed by the US and its allies in Afghanistan. This decision has significant implications for lawfare battles the Palestinians are conducting against Israel and the information wars Israel is conducting against hostile organizations and movements such as the Boycott, Divestment, and Sanction movement (BDS).

Sometimes powerful threats are the only way to protect the interests of democratic countries against abuses of international law and human rights. In 2001, under a controversial universal jurisdiction Belgian law, survivors of the 1982 massacres at the Sabra and Shatila neighborhoods in Beirut, where Christian militias killed hundreds of Palestinians, filed a criminal complaint against Israeli PM Ariel Sharon. They accused him of responsibility for the massacre as he served as Minister of Defense at the time. The complaint went several rounds of court sessions, and during that period Sharon could not visit Belgium in view of the danger that he would be arrested.

In 2003, a Belgian lawmaker used the same law to file a criminal complaint against Gen. Tommy Franks, commander of the US forces in Iraq, claiming that he was responsible for numerous civilian casualties. Following this example, various groups threatened to indict President George Bush, VP Dick Cheney, and Secretary of State Colin Powell.

The US response was swift and tough. Secretary of Defense Donald Rumsfeld threatened Belgium: NATO headquarters will be moved from Brussels if it did not rescind the law and stop the criminal complaints. The Belgian government surrendered, changed the law, and dropped the proceedings against both the US officials and Ariel Sharon. In that instance, “might makes right” stopped the abuse of international law by Belgium and by enemies of the US and Israel, and in the process saved Belgium from itself.

A similar story erupted around the International Criminal Court (ICC). The court was established in 2002 to prosecute individuals for international crimes of genocide, crimes against humanity, and war crimes. The US and Israel did not ratify the Rome Treaty that established the Court out of concern about politicized and biased judgments. Those concerns turn out to have been justified.

In November 2017, ICC chief prosecutor Fatou Bensouda asked the Court for authorization to open an investigation into war crimes allegedly committed against detainees by the US military and the CIA in Afghanistan. The US strongly protested and warned the Court of possible stiff retaliatory measures.

The Palestinian Authority has repeatedly demanded that the ICC investigate Israel’s “war crimes” in the West Bank and Gaza. In July 2018, in an unusual and strange move for the Court, three ICC judges ordered the Court’s registry, a neutral organ of the court, to provide administrative support “to establish, as soon as practicable, a system of public information and outreach activities for the benefit of the victims and affected communities in the situation in Palestine.” Moreover, the judges instructed the registry to open an “informative page on the Court’s website” geared exclusively to Palestinians and to report on progress every three months. This proactive procedure has never been adopted against any state or person.

These appeals to the ICC angered National Security Adviser and former US ambassador to the UN John Bolton. In September 2018, he called the Court “unaccountable” and “outright dangerous” to the US, Israel, and other allies. “For all intents and purposes, the ICC is already dead to us,” he told the conservative Federalist Society in Washington. “If the Court comes after us, Israel, or other US allies, we will not sit quietly.” Bolton threatened the ICC with sanctions as follows: “We will ban its judges and prosecutors from entering the US. We will sanction their funds in the US financial system, and we will prosecute them in the US criminal system.” The ICC’s officials arrogantly rebuffed Bolton’s threats.

In March 2019, Secretary of State Mike Pompeo said the US would revoke the visas of ICC officials who attacked America’s rule of law by investigating allegations against US forces in Afghanistan or allegations against Israel. “We are determined to protect American and allied military and civilian personnel from living in fear of unjust prosecution for actions taken to defend our great nation,” he said. Pompeo referred to the argument that democratic countries like the US and Israel have capabilities to investigate war crimes and often try and punish those who break the law, while authoritarian countries like Russia, Syria, and Iran, which don’t respect the rule of law, are never investigated for war crimes they have committed. See, for example, Russia in Chechnya and the Ukraine, and Iran in Syria.

On April 5, 2019, the US revoked the visa of ICC prosecutor Fatou Bensouda. A few days later, Court judges rejected her request to open an investigation against the US by arguing that it is likely to fail due to lack of cooperation from the parties involved and budgetary constraints. It is almost certain that if the prosecutor had asked for authorization to investigate alleged Israeli war crimes, the judges would have had no problem approving the request. It appears, then, that when the US is involved, there is another critical consideration. The judges were more concerned with losing their visa entry into the US and other American financial sanctions than with the case itself.

President Trump called the decision “a major international victory” and denounced the international court for its “broad, unaccountable prosecutorial powers,” as well as for what he considers its threat to American sovereignty.

“Any attempt to target American, Israeli or allied personnel for prosecution will be met with a swift and vigorous response,” Trump said.

The specific mentioning of Israel is important because the Palestinians have been using lawfare, the abuse of international law for political purposes, as a critical instrument of their delegitimization and dehumanization campaigns against Israel. The US strategy could undermine the Palestinian effort because the Court will be subjected to similar punitive actions if it decides to proceed with investigations of Israel.

The revoking of the prosecutor’s US visa has other important implications. A few days ago, the US cancelled the visa of Omar Barghouti, co-founder of the BDS movement, and prohibited his entry to the US. Barghouti created an anti-Semitic movement that isn’t interested in Palestinian-Israeli peace or in Palestinian human rights. He has denied Israel’s right to exist as a Jewish state, called for the establishment of a Palestinian state from the river (Jordan) to the sea (Mediterranean), and demanded the return of millions of Palestinian refugees to Israel. The US justly revoked his visa because he is also avidly anti-American and encourages provocative and violent activity against Jewish students and pro-Israeli speakers in American universities.

Recently, Israel attempted to bar entry of BDS activists who describe themselves as defenders of human rights, but in practice participate in and sometimes inspire provocative and even violent activities against Israel. The activists and their few supporters in Israel claim that this action violates freedom of speech, but this is an empty and baseless argument. A state has a legitimate right to prevent the entry of those who call for its destruction and take actions, such as BDS, to achieve that goal.

Prof. Eytan Gilboa is Director of the Center for International Communication and a senior research associate at the BESA Center for Strategic Studies at Bar-Ilan University. Currently, he is Israel Institute Visiting Professor at the University of Pennsylvania.