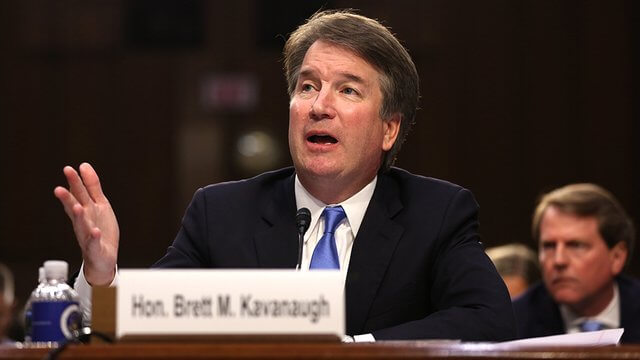 Senate Republicans are eyeing a vote on the floor on Brett Kavanaugh’s Supreme Court nomination next week.

Senators, while coming out of a closed-door caucus lunch, acknowledged the situation remains fluid.

But they said they expected to be in session through the weekend to run out the procedural clock, a move that would allow them to wrap up Kavanaugh’s nomination next week.

GOP Sen. John Cornyn (Texas), the No. 2 GOP senator and member of leadership, told reporters that if Kavanaugh could get out of the Judiciary Committee on Friday they would be able to be done with the nomination “by the first part of next week.”

Sen. Johnny Isakson (R-Ga.) said he was planning to be around until Tuesday to finish Kavanaugh’s nomination.

“If you plan to do something before next Tuesday I wouldn’t plan on it,” Isakson said.

GOP Sen. John Thune (R-S.D.) initially told reporters that a vote could happen on Tuesday. He later hedged after the lunch saying it depends on how much Democrats drag out the procedural clock.

No schedule on Kavanaugh’s nomination has been formally announced beyond a Thursday hearing where Kavanaugh and Christine Blasey Ford, a woman accusing him of sexual assault, are scheduled to testify before the Judiciary Committee.

Cornyn told reporters Monday evening that it was possible a committee vote could happen by Friday. If the Judiciary Committee wants to vote on Friday, committee chairman Chuck Grassley’s (R-Iowa) staff would have to notice the vote on Tuesday.

Senate Majority Leader Mitch McConnell (R-Ky.) did not give a specific timeline on Kavanaugh’s nomination during a weekly press conference only saying they would vote in the near future.

“I believe he’ll be confirmed, yes,” he told reporters.

A GOP aide, asked about the Tuesday vote timeline, stressed that a final decision had not been made but to not make weekend plans.

Senators discussed strategy for Kavanaugh during their closed-door lunch.

Grassley told his colleagues at the lunch to prepare to be in session this weekend, Sen. Bob Corker (R-Tenn.) told reporters.

Several other senators said that a final decision had not been made but that they expect to be in session to try to run out the procedural clock on Kavanaugh’s nomination over the weekend.

“I’ll be here. … I think that it’s going to be pretty hard to move this along without having votes on certainly Friday and Saturday,” GOP Sen. Orrin Hatch (Utah) told reporters.

GOP Sen. John Kennedy (La.) asked about the weekend told reporters, “I think we are going to be in session.”