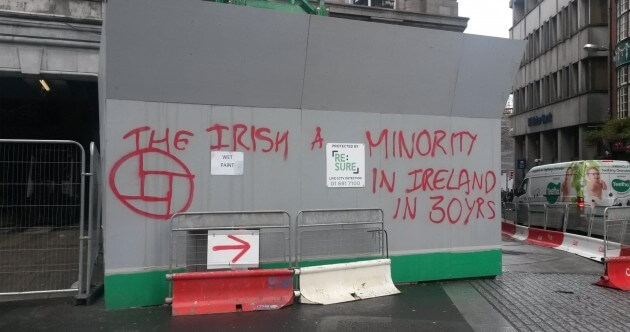 The consequences of enacting the proposed legislation for the anti-semites in Ireland are far reaching. Currently Ireland is the poodle of the European Union, sycophantically being happily bullied by the unelected administrators within the EU into being at the political forefront in making the United Kingdom’s exit from the least democratic bastion of bureaucracy as difficult as is practically possible.

The fact that Europe would be under Nazi control if it were not for the United Kingdom’s brave stand against Hitler does not seem to faze the Europeans or allow them to show any degree of flexibility to ease the path for the United Kingdom’s exit. The financial greed power crazed anti British, fat cats of Europe deem that the freedom and escape from the horrors of totalitarianism  won for them by the UK are unworthy of any decency left in European ideology.

The Irish of course, perversely would have been as happy under Nazism given their duplicitous behavior during WW2 when they were the only country in the world not only to offer condolences on the death of Hitler but also the only country in the world to punish those of their countrymen who fought against the Nazis. On their return to Ireland these men were stripped of their pensions, not permitted to work for Government, Government suppliers or contractors.

Ireland is still the only western democracy to have on open display (Dublin and Limerick) memorials to Nazi collaborators . One wonders how the gay, non Aryan Irish leader, Varadkar would have fared under the Nazis.

So why does this US legislation impact on Ireland? This is because the Irish are currently in the process of passing their own legislation supposedly in respect of human rights abuses of Palestinians but in effect a piece of Jew hating legislation given that the only country in the world the Irish seek to boycott U.N. not coincidentally is the only Jewish State in the world.

If the Irish undertake this legislation they would be breaking US law and themselves subject to US sanctions.

One wonders whether the European Union will be so supportive of the Irish position against the USA as such a move is reckoned to wipe off up to five percent of European gross domestic product in the first year alone if enacted. Given that the hidden news of Italy formally falling into recession last week the economic turmoil that the antisemitic Irish legislation would create could not possibly be supported.

Ironically the Europeans are opposing the USA’s sanctions of Iran by instituting a payment system that would support trade between the Iranians and the EU. Perhaps the fact that the Iranians have no chance of implementing the system as a result of their technical incompetence is a comfort factor to the Europeans who really do not want to upset the Trump Administration from an economic perspective. Simultaneously it keeps channels open to any Iranian flexibility however unlikely. The Israelis are gleeful in the knowledge that the bluffing Iranians cannot even put in place a financial transaction system that would greatly boost the economy so what chance of developing sophisticated weapons. The Palestinians who rely on Iranian military weaponry will have to continue with misfiring missiles.

The digression was necessary to explain the dangers of opposing the economic might of the USA.

The Iranian rhetoric of ‘they will never accept the payment system ‘ is a euphemism for ‘ actually we don’t have the competencies to implement ‘. Moreover, the failure to implement the transactional system has come as a huge body blow to those in Ireland promoting the anti Jewish State boycott legislation as there is now no political fallback.

Those of us all too aware of Ireland’s pre, during and post WW2 antisemitism are challenging by appealing to individuals to implement #BROIGAS.

The acronym is a Yiddish word meaning anger and stands for – Boycott Republic Of Ireland Goods And Services.

It is not supported by any political body, NGO, Charity nor established organization. It is simply an appeal to individuals globally nauseated by Irish Jew hatred and who want in their own small way to mount a challenge. Remarkably the feedback has in the first few weeks of implementation been very impressive. Just a selection of examples is as follows.

Several professional bodies and companies either cancelling scheduled off-sites to Ireland and / or determining not to hold future events there.

Continuing feedback from individuals relating to discontinue to purchase consumer products (food, drink pharmaceutical) from Ireland simply by checking labels on the backs of such products.

Fewer but some individuals either taking away or no longer having their race horses trained in Ireland.

Similarly for financial products, individuals demanding custody being moved from Ireland to another centre.

This boycott by individuals is not going to make headlines immediately but slowly will have a definite ,negative , economic impact eventually especially if a larger organization makes a stand.

Recently Intel decided to invest $11 billion in Israel rather than Ireland. A coincidence or as a result of BROIGAS? We will never know but indeed possibly came into their decision making process.

If you decide to join this silent protest please remember that it only pertains to the Republican of Ireland and not Northern Ireland which is very much part of the United Kingdom.

Peter Baum is a Jewish activist, analyst and Special Contributor of Blitz.