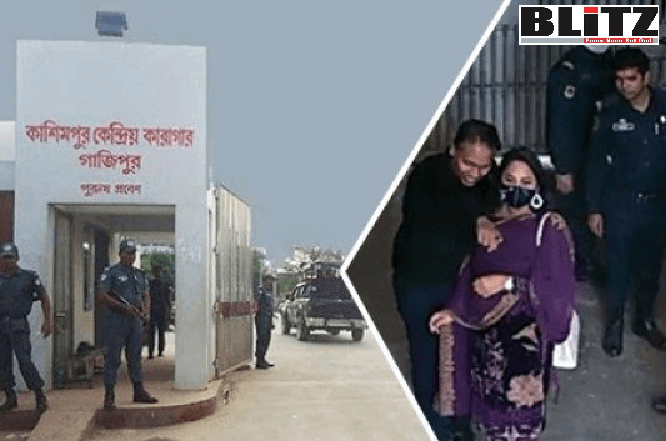 News and social media in Bangladesh is flooded with information regarding a sex scandal inside prison, which has already resulted in formation of a number of probe committees, while people are questioning about the serious irregularities, which have been taking place for years under the nose of the authorities concerned.

According to media reports, Tushar Ahmed, an official of a scandalous company named Hallmark Group spent private time with an unknown female inside Kashimpur Central Jail-1 in Gazipur on January 6. The matter was disclosed when the footage of the CCTV [Close Circuit TV] cameras were circulated on the social media.

It is learned that, during the pandemic, when visitors are barred from entering the prison premises, at 12:55 pm on January 6, 2021, a woman, accompanied by two men went to the prison official’s room. She was greeted by deputy jailor Saqlain. Minutes later, Tushar Ahmed was taken into the room and he accompanied the woman to the room of the jail superintendent Ratna Roy. The superintendent earlier left the room thus letting Tushar and the woman have sex in privacy.

After spending almost an hour, Tushar and the woman left the room of the superintendent in jolly mood. The couple returned to the room of deputy jailor Saqlain and spent another two hours, gossiping and dinning.

Commenting on the incident, Additional District Magistrate (ADM) Abul Kalam told media: “the preliminary investigation has found the veracity of the incident. We have been given seven working days to the probe committee to submit the report. Those found guilty will be punished”.

Allowing prisoners in spending private time with any female and having sex inside the prison premises is illegal as per laws of Bangladesh.

It may be mentioned here that, jailor of Kashimpur Jail-1, Noor Mohammad Mridha became an intimate friend of Tushar Ahmed since 2012, when Mridha was deputy jailor at Dhaka Central Jail. At that time, prison authorities had provided VIP facilities to Tushar in exchange for amount of monthly payment. It is even alleged, during that time, Noor Muhammad Mridha was visiting Tushar during the late hours of night and were drinking alcohol. Few more prison officials also were joining such illegal activities almost on a regular basis.

But jailor Mridha may not be have any hands behind the sex scandal, as the matter evidently were coordinated by superintendent Ratna Roy and deputy jailor Saqlain. Rather, jailor Mridha, being totally helpless at the illegal actions of the superintendent and her subordinates, might have finally leaked the CCTV footage to the media – although this too was violation of service rules.

According to sources, for any outsider, it is impossible getting footage of the CCTV as those are stored under strict supervision of the prison authorities. They said, while authorities are investigating the sex scandal, it is also essential to investigate as to how the CCTV footage went to the media, without prior consent of the higher authorities.

Tushar Ahmed is currently facing trial into a number of criminal cases related to swindling of billions of takas from state-owned Sonali Bank. The Anti Corruption Commission, back in 2012, filed cases against Tushar and other members of Hallmark Group.