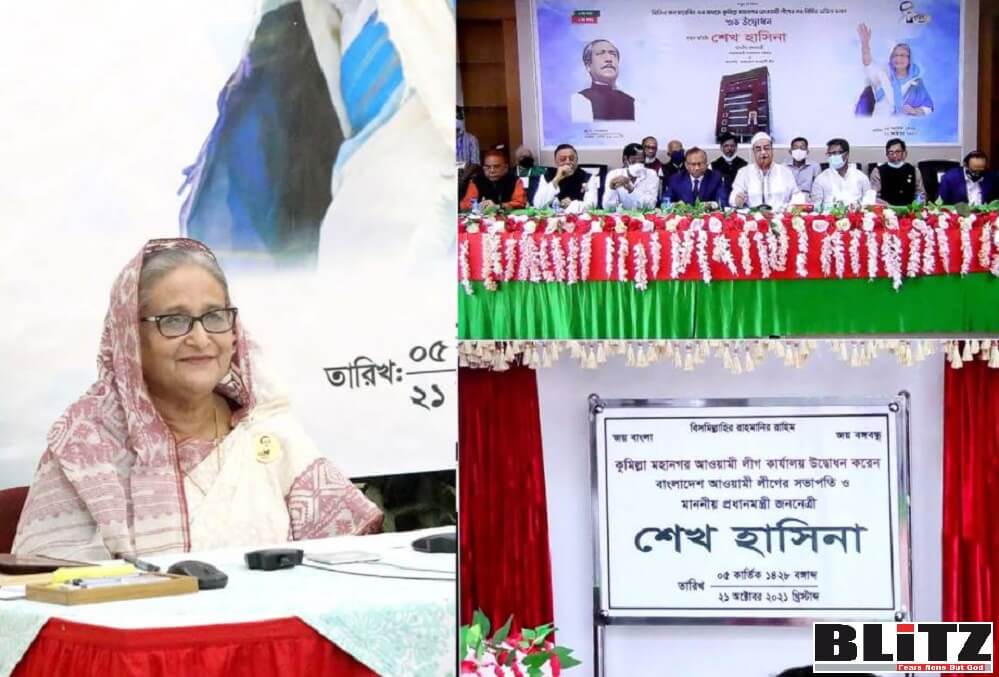 “Communal harmony will have to be maintained by ensuring intensified area-wise vigilance by our leaders and activists alongside arranging meetings and processions of peace to ensure co-existence as no violence occurs,” she said.

The premier said this while inaugurating a newly contructed  multi-storied Cumilla Awami League office with all the modern facilities joining virtually from her official Ganabhaban residence.

She also called upon the countrymen to be respectful to all the religions as citizens of a secular state.

The prime minister called the Cumilla incident “very regretful”, urging the countrymen not to take law in hand.

She said, “If anyone commits crime, our government will definitely bring the culprits to book whoever he or she might be.”

Responding to the demand of formation of a division with Cumilla, she proposed to set up two divisions after the names of “Padma” with Faridpur and its surrounding districts and “Meghna” with Comilla and its neighbouring districts.

Sheikh Hasina reminded all that every religion is talking about peace and Bangladeshi people are living in a non-communal society over decades where harmony has been prevailing among the followers of every faith.

She said people fought against the Pakistani occupation forces shoulder to shoulder and shed blood irrespective of their caste, creed and religions for the country’s independence responding to the clarion call of Father of the Nation Bangabandhu Sheikh Mujibur Rahman.

“We want that the people of all faiths such as Muslim, Hindu, Boudhha and Christian and all classes will live in the society peacefully with due
dignity and honour,” she opined.

The prime minister called upon all to show due respect to other religions as everyone has the similar right to observe religious rites and similarly none has the right to malign other’s religion.

She said if people analyze the incident of attack on Cumilla Hindu temple, they would find that disrespect has been shown to “our holy Quaran” while trying to dishonor the religion of others, which she termed as the “most regretful matter”.

The prime minister said her government has taken prompt measures to rehabilitate the harmed Hindu community people by giving them temporary shelters, food and other required measures.

She added: “We have arranged tents and dry and cooked foods for the victims immediately following the incidents in Cumilla, Pirganj of Rangpur and other places. We have also provided clothes and treatments to them. We will build their homes and measures to this end have already taken.”

The premier said a section of vested-quarters like the BNP-Jamaat always tries to commit such incident as they do not tolerate the country’s
development anymore.

“They (ill-cliques) are out to make their own fate since assuming power after assassination of the Father of the Nation,” she said.

Bangabandhu has dedicated his entire life for the welfare of the people and the nation, she said, adding that being soldiers of the ideal of the Father of the Nation, “you have to devote your life for the people’s wellbeing”.

Sheikh Hasina said that she felt very happy by inaugurating the Cumilla AL office and wanted to establish such kind of office for her party in every district.

The prime minister continued that the Awami League was established at the hand of the Father of the Nation for serving the people and asked her party leaders and workers to stand by the masses in their hardships.

Spelling out various measures taken by her government for the overall development of Cumilla, the Prime Minister said the government will continue the work for uplift of the district.

She said the Father of the Nation has not only given the country’s independence, but also the way for economic development and therefore, the country has now become a developing nation following his footprints and InshaAllah it will be transformed into a developed one.

“The country is now progressing ahead. We will take the country forward and build a developed and prosperous country as envisioned by the Father of the Nation,” the premier said.

Sheikh Hasina said she has prepared a plan to turn the country into a developed one from the developing nation upholding its present status so that the people of the country, being a victorious nation, could move around the world with due dignity and honour.

The Prime Minister said she left no stone unturned to ensure continuation of the country’s development in the days to come as she is growing older day by day and might die anytime.

“It is a matter of surprise that I am still alive despite several attempts on my life such as hurling grenades and bombs and firing bullets. Despite the attacks, Allah still keeps me alive as the almighty wants me to do a work,” she continued.

Sheikh Hasina, also President of the Awami League, thanked her party leaders and workers for protecting her from the attacks sacrificing their lives.