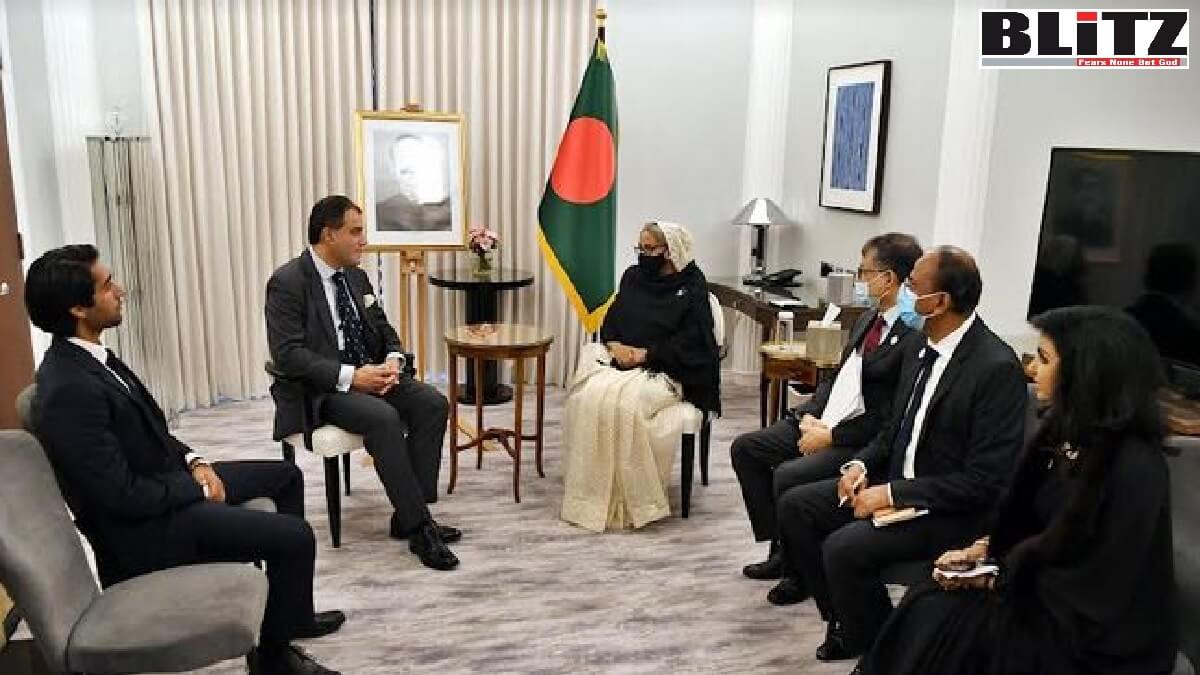 Sheikh Hasina made the call when Lord Karan Bilimoria of Chelsea, also President of the Confederation of British Industry (CBI), paid a courtesy call on her at the latter’s place of residence on the second day of her official visit to the United Kingdom.

The Premier flagged her government’s efforts to promote vaccine development research and Bangladesh’s readiness to partner with international institutes or businesses with interest in the matter.

He is the first South Asian of Parsi background to sit in the UK’s House of Lords.

She recalled the sacrifices made by many from the Indian armed services for the cause of Bangladesh’s independence. She also mentioned her efforts to honour the memory of the Indian martyrs by introducing a scholarship for their descendants during her visit to India earlier this month.

Lord Bilimoria expressed interest in forging higher education partnership with Bangladesh in his capacity as the Chancellor of Birmingham University.

He also invited the Prime Minister to the University to speak on a topic of her choice.

The Bangladesh premier briefed the Lord about the growing start-up scene in Bangladesh, and the work done under the auspices of “Digital Bangladesh”.

Lord Bilimoria shared the interest in exploring the opportunities for future possible partnerships.

They both mourned the demise of Queen Elizabeth II and paid tribute to the late Queen’s extraordinary life of service and dedication.

Prime Minister Sheikh Hasina suggested that the Commonwealth should do something befitting in memory of late Queen Elizabeth II in remembrance of her dedicated services to the forum over the years.

She made this remark while Commonwealth Secretary General Patricia Scotland QC paid a courtesy call on her at her place of residence.

She also expressed her confidence that the legacy would be carried forward by King Charles III as the new Head of the Commonwealth.

Besides, the Prime Minister congratulated the Secretary General on her re-election during the Commonwealth Heads of Government Meeting in Rwanda in June this year.

She once again appreciated the Prime Minister’s leadership in successfully managing the COVID-19 pandemic.

She observed those Commonwealth Member States had fared better during the crisis that had women in the lead or had women actively included in the management process.

The Prime Minister responded positively to the Secretary General’s suggestion on highlighting the female leadership within the Commonwealth family on the occasion of the International Women’s Day.

She also committed to partnering with the Commonwealth to observe the “Year of Peace” and the “Year of Youth” through commemorative events next year.

The Secretary General made a particular mention of Bangladesh’s work in nature conservation and disaster management, and invited the Prime

Minister to demonstrate leadership in the Commonwealth’s “Living Lands” initiative.

She expressed satisfaction at the work being done on promoting business-to-business connectivity, with Bangladesh’s active footprint.