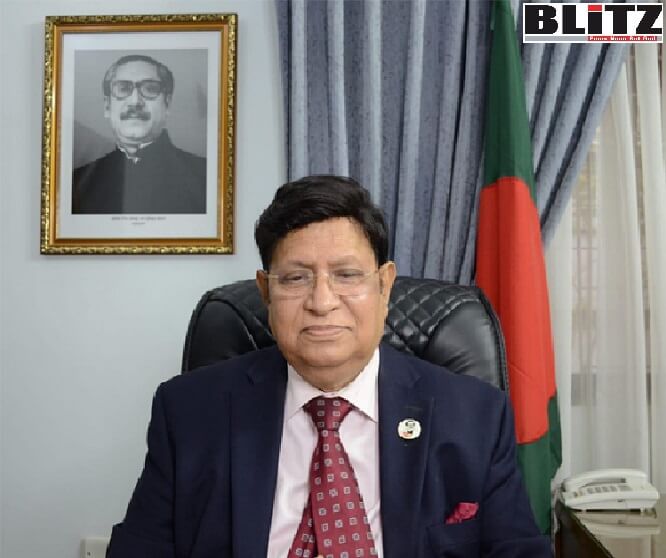 “Many accolades showered on her by prominent world leaders during our Golden Jubilee celebrations speak for themselves,” he said in a video message marking the Foreign Service Day.

“The geo-political significance of Bangladesh’s economic rise and development credentials are now unmistakable to foreign policy pundits,” he said.

Noting that the Bangladesh Foreign Service carries this proud legacy as its innate source of inspiration and guidance, he said, “It stands tall on the foundational dictum of ‘Friendship to All, Malice towards None’, boldly asserted by our Father of the Nation Bangabandhu Sheikh Mujibur Rahman.”

He thanked his ministry’s officials and diplomats stationed abroad for arranging 147 congratulatory messages plus 30 video messages from the leaders of the world.

Momen said Bangladesh’s contributions to international peace, development and humanitarian work have been the outcome of the dedicated hard work of many at the Foreign Service that our nation at 50th anniversary can definitely feel proud of.

“On this Foreign Service Day, we owe a debt of gratitude to all our officials and their family members serving missions for their contributions to upholding the image of our nation abroad over the last five decades,” he said.

He reaffirmed the commitment of Bangladeshi diplomats to face the unforeseen challenges and also to seize the unbounded opportunities that beckon Bangladesh, a land of opportunity.

The foreign minister thanked all foreign ministry’s officials for braving the challenges of the ongoing pandemic to render their services in hotspots in different parts of the world.

He also paid tribute to nearly 12 million-strong Bangladeshi expatriate community across the globe for their contributions to our nation-building and international branding.

On this day in 1971, 50 years ago, Bangladeshi diplomats and staff stationed in Kolkata defying the oppressive and occupation regime of Pakistan took over the Pakistan Deputy High Commissioner’s Office and hoisted the Bangladesh national flag atop and thus established the first Bangladesh Mission abroad.