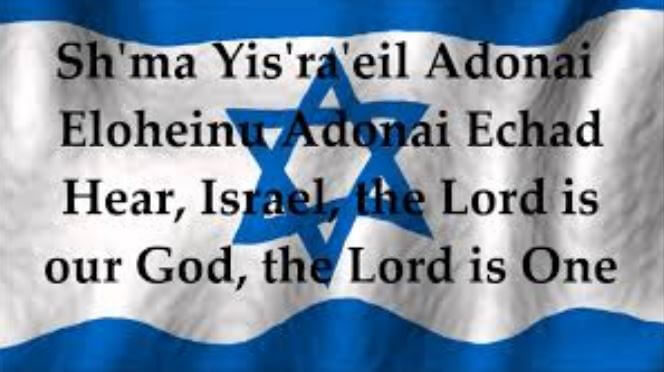 English translation of the title of this article is – “Hear Israel, our God, our Lord is one”.

Isn’t it extremely powerful and realistic pronouncement? People of most of the faiths shall not argue on this point endorsing the fact – God is always one. There aren’t multiple gods.

According to Judaism, God is always like, ‘He is my God, my living God…Who hears and answers’. This is the highest form of spirituality. This is certainly the indication of reciprocal communication between the God and his creatures – human being. Unless we believe and feel the existence of God and know, He is not only seeing us but also listens to us and responds to our prayers. That is why, prayer is considered as extremely important in Judaism.

In Hebrew, meaning of Arabic word ‘Shoaib’ is Jethro. So indeed, I am Jethro. First of all let me narrate who was Jethro. According to the Torah (Herewith Bible), Jethro was the father in law of Prophet Moses (PBUH), who was a Kenite shepherd and priest of Midian. In Exodus, he is initially referred to as “Reuel” (Exodus 2:18) but then as “Jethro” (Exodus 3:1). According to the Book of Numbers (10:29), Jethro was the father of Hobab. Followers of Druze religion consider Jethro as the spiritual founder and chief prophet in his own right and are considered an ancestor of all Druze.

Jethro is called a priest of Midian and became father-in-law of Moses after he gave his daughter, Zipporah, in marriage to Moses. He is introduced in Exodus 2:18.

Jethro is recorded as living in Midian, a territory stretching along the eastern edge of the Gulf of Aqaba, northwestern Arabia. Some believe Midian is within the Sinai Peninsula. Biblical maps from antiquity show Midian on both locations.

Jethro’s daughter, Zipporah (Rohaya), became Moses’s wife after Moses had fled Egypt, having killed an Egyptian who was beating a Hebrew slave. Having fled to Midian, Moses intervened in a water-access dispute between Jethro’s seven daughters and the local shepherds; Jethro consequently invited Moses into his home and offered him hospitality. However, Moses remained conscious that he was a stranger in exile, naming his first son (Jethro’s grandson) “Gershom”, meaning “stranger there”.

Moses is said to have worked as a shepherd for Jethro for 40 years before returning to Egypt to lead the Hebrews to Canaan, the “promised land”. After the Battle at Rephidim against the Amalekites, word reached Jethro that under Moses’ leadership the Israelites had been delivered out of Egypt, so he set out to meet with Moses. They met in the wilderness at the “Mountain of God”. Moses recounted to Jethro all that had taken place, and then, according to Exodus 18:9–12a: Jethro rejoiced for all the good which the Lord had done for Israel, whom He had delivered out of the hand of the Egyptians.

Then Jethro, Moses’ father-in-law, took a burnt offering and other sacrifices to offer to God.

Following this event, it was Jethro who encouraged Moses to appoint others to share in the burden of ministry to the nation Israel by allowing others to help in the judgment of smaller matters coming before him.

Most of the people may not know the historic significance of the name ‘Israel’. Israel is a Biblical given name. The patriarch Jacob was given the name Israel. In Jewish and Christian texts from the Greco-Egyptian area during Second Temple Judaism and beyond the name was understood to mean “a man seeing God” from the ʾyš (man) rʾh (to see) ʾel (God). Jacob’s descendants came to be known as the Israelites, eventually forming the tribes of Israel and ultimately the Kingdom of Israel, whence the name of modern-day State of Israel came. In Qur’an Jews are referred as Bani Israel, meaning Sons of Israel. And indeed, I am proud to be the Son of Israel.

In my opinion, those who oppose Israel are not followers of divine scriptures, because they deny our father, Prophet Abraham (PBUH) and his children. Being a person of faith, I cannot, under any circumstance, deny the State of Israel. That is why, I too say – Ami Yisrael Chai.