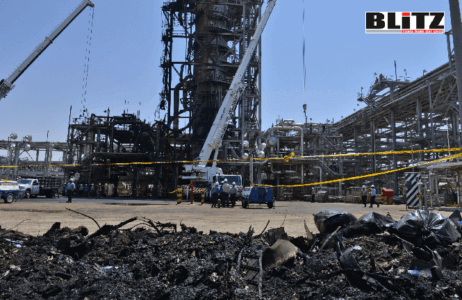 Neither Saudi Arabia nor the US is rushing to retaliate for a brazen, allegedly Iranian attack that severely damaged two of the kingdom’s key oil facilities. That is not to say that Saudi Arabia and/or the US will not retaliate in what could prove to be a game changer in the geopolitics of the Middle East.

Reading the tea leaves of various US and Saudi statements on the allegedly Iranian attack on the kingdom’s key oil facilities on September 14, it is possible to discern constituent elements that could change the region’s dynamics.

They also shine a spotlight on the pressures on both countries, as well as on shifts in the US-Saudi relationship that could have long-lasting consequences.

With US Secretary of State Mike Pompeo visiting the kingdom to coordinate what his office described as efforts to combat “Iranian aggression in the region,” Saudi Arabia and the US will be seeking to resolve multiple issues.

These include collecting sufficient evidence to convincingly apportion blame; calibrating a response that would be appropriate but not drag the US and the Middle East into a war that few want; deciding who takes the lead in any military response, and managing the long-term impact of that  decision on Saudi-US relations and the US commitment to the region.

A careful reading of Saudi and US responses to the attacks so far suggests subtle differences between the two. They mask fundamental issues that have emerged in the aftermath of the attacks.

For starters, Pompeo and President Donald Trump have explicitly pointed the finger at Iran as directly responsible, while Saudi Arabia has stopped short of blaming the Islamic Republic. It says instead that its preliminary findings show that Iranian weapons were used in the attack. Iran has denied any involvement.

The discrepancy in the initial apportioning of blame raises the question whether Saudi Arabia is seeking to avoid being maneuvered into a situation in which it will be forced to take the lead in retaliating against the Islamic Republic with strikes against targets in Iran rather than Yemen.

Political scientist Austin Carson suggests that Saudi Arabia may have an interest in at least partially playing along with Iranian insistence that it was not responsible. “Allowing Iran’s role to remain ambiguous could reduce Saudi leaders’ need to appear strong… The Saudis are reportedly unconvinced by shared US intelligence that attempts to link the attacks to Iran’s territory. Some experts suggest this may reflect a more cautious approach to escalation,” Carson wrote in The Washington Post.

Saudi Arabia’s initial reluctance to unambiguously blame Iran may have a lot to do with Trump’s America First-driven response to the attacks, which appeared to contradict the Carter Doctrine proclaimed in 1980 by President Jimmy Carter.

The doctrine, a cornerstone of the Saudi-US relationship, stated that the US would use military force if necessary to defend its national interests in the Gulf.

Trump’s apparent weakening of the US’s commitment to the defense of the kingdom, as encapsulated in the doctrine, risks fundamentally altering a relationship already troubled by Saudi conduct in the more than four-year-long war in Yemen and last year’s killing of journalist Jamal Khashoggi in the Saudi consulate in Istanbul.

Signaling a break with the Carter Doctrine, Trump was quick to point out that the attacks were on Saudi Arabia, not on the US, and suggested that it was for the Saudis to respond.

“I haven’t promised Saudis that. We have to sit down with the Saudis and work something out. That was an attack on Saudi Arabia, and that wasn’t an attack on us. But we would certainly help them,” Trump said without identifying what kind of support the US would be willing to provide.

Despite blustering that the US was “locked and loaded,” Trump insisted that “we have a lot of options but I’m not looking at options right now.”

Trump’s response to a tweet by US Senator Lindsey Graham, a friend of the president who favors a US military strike against Iran, that “the measured response by President @realDonaldTrump…was clearly seen by the Iranian regime as a sign of weakness” was equally telling.

“No Lindsey, it was a sign of strength that some people just don’t understand.” Trump said.

Trump further called into question the nature of the US-Saudi defense relationship by declaring that “If we decide to do something, they’ll be very much involved, and that includes payment. And they understand that fully.”

The Saudi foreign ministry maintained, with the attacks casting doubt on the Saudi military’s ability to defend the kingdom’s oil assets and Trump seemingly putting the onus of a response on Saudi Arabia, that “the kingdom is capable of defending its land and people and responding forcefully to those attacks.”

Only indisputable evidence that the drones were launched from Iranian territory would incontrovertibly point the finger at Iran.

So far, the Saudis have stopped short of that while US officials have suggested that the drones were launched either from Iran or by pro-Iranian militias in southern Iraq.

Holding Iran responsible for the actions of a militia, whether in Iraq or Yemen, could prove tricky given longstanding questions about the degree of control Iran has over various groups it supports, particularly the Houthis.

The argument could turn out to be a slippery slope given that by the same logic, the US would be responsible for massive human casualties in the Yemen war resulting from Saudi use of American weaponry.

Military retaliation may not be immediate even if the US and Saudi Arabia do produce convincing evidence that Iran was directly responsible.

“No knee jerk reactions to this – it’s very systematic – what happens with patience is it prevents stupid moves,” a US official said.

The US is likely to attempt to first leverage that evidence in meetings on the sidelines of next week’s UN General Assembly to convince the international community, and particularly the Europeans, to drop opposition to last year’s US withdrawal from the international nuclear accord with Iran and the harsh economic sanctions the Trump administration has since imposed on Iran.

Both the US and Saudi Arabia will also want to use the opportunity of the UN gathering to try to ensure that the fallout of any military response is limited and does not escalate into a full-fledged war that could change the geopolitical map of the Middle East.

Said foreign policy analyst Steven A. Cook: “How the Trump administration responds will indicate whether US elites still consider energy resources a core national interest and whether the United States truly is on its way out of the Middle East entirely, as so many in the region suspect.”