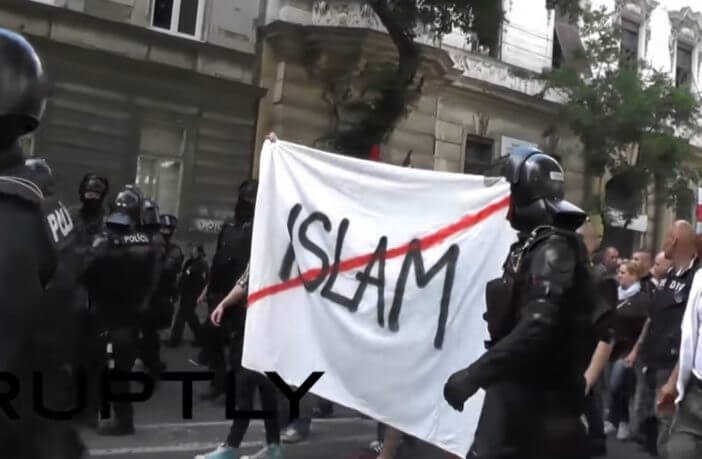 While all of us know, there is not a single mosque in socialist Democratic Republic of Korea, which is commonly known as North Korea, there in fact is a functioning mosque – the Ar Rahman Mosque hosted by the Iranian embassy in Pyongyang. On the other hand, one of the European Union (EU) Member States, Slovakia, which is a home to five thousand Muslims, has no mosque. Its Muslims can gather in its capital’s Cordoba Cultural Center, which also serves as an unofficial place of worship. The opinion on Islam among the Slovaks is generally unfavorable – from Prime Minister Robert Fico claiming that Islam has no place in Slovakia, to the Parliament banning the recognition of Islam as an official religion, to its borders only accepting Christian migrants, it’s not hard to tell Slovakia wants little to do with Muslims.

Slovakia’s policymakers say, Islam must not be taught in schools and the 5,000 Muslims, mostly European ones, who reside in the country, are not officially recognized. They account for only 0.1 percent of the population.

In 2007, politicians changed the country’s laws so that 20,000 signatures from members were required to be recognized by the state. In 2017 they more than doubled the number of necessary signatures.

Islam not being officially recognized poses major difficulties for the Muslim minority group. Among other things, they are not allowed to have official religious leaders, conduct Muslim marriages or receive financial contributions from the State, rights which 18 other recognized religions have.

Slovakia is the last EU Member State without a single mosque, TRT World reports. Previous attempts to build have been halted by politicians.

“Islamization begins with kebab and in Bratislava it has already begun. So understand what it could be like in 5-10 years,” says MP Andrej Danko.

“Every normal European, Christian or atheist fears this satanic pedophile creation of the devil,” rumbles another critical MP.

According to TRT, the situation was further complicated for the country’s Muslims in connection with the 2015 asylum wave. Slovakia then used the absence of mosques as an argument not to accept any migrants.

Slovakia is not the only country banning construction of mosque. There are actually many more countries without a mosque than the obvious Vatican City or unrecognized microstates. Despite not having a mosque, most of these countries do have Islamic centers where Muslims gather to worship.

Talking to the media, Slovakian Muslims say, the country in fact has “unofficially” outlawed Islam.

Estonia is another country with 1,500 Muslim populations, with no mosque. Its Muslim population offer prayers inside rooms in   don’t have a proper mosque to pray in, but rooms have been set up in Tallinn’s Turath Islamic Center. Turkey recently offered to finance the building of Estonia’s first full-fledged mosque.

San Marino’s Muslim population probably doesn’t reach three digits, but these can go pray in the nearby Forlì and Ravenna Mosques, located in Italy.

Fellow microstate Monaco has no mosque either, but places of worship for Muslims can easily be found a few miles outside the border, in France.

Uruguay is home to less than 1,000 Muslims. There are three Islamic centers in its capital, and the nearest mosque can be found in Chuí, the first Brazilian city after the border.

The only African country without any reported mosques is São Tomé and Principe, a former Portuguese colony that’s predominantly Catholic.

There are several other Caribbean and Pacific island states where the Muslims account for a microscopic slice of the total population, and it’s likely that some of these don’t have any mosques.

Islam is expanding in the UK:

While some of the European nations are not having any mosque, Islam visibly has been expanding fast in the United Kingdom. According to latest statistics, there are 1,065 mosques in the UK, alongside hundreds of Islamic centers and community centers. In most cases, community centers are used as mosques as well as Koranic schools (madrassas). There are over 2,200 mosques in the US, over 300,000 in India, 8,000 in Russia, 400 in the State of Israel (the number of mosques in Israel has increased about five-fold since 1988, when there were 80 mosques), over 2,500 mosques in France, roughly 3,000 in Germany, over 39,000 mosques in China, more than 50 mosques in Ireland, over 205 registered mosques in Austria (there are a large number of unregistered mosques too), over 340 mosques in Australia and more than 10 recognized mosques in Mexico. There are over 100 mosques alone in the New York City.

According to statistics, Indonesia has over 800,000 mosques while Bangladesh has more than 250,399 mosques.

Arab nations are regularly sending millions of dollars to the Western nations for building mosques, Islamic community centers and so-called community centers (which also are used as mosques and madrassas). In the UK, more than 27 per cent of its Muslim population sends their children to Koranic schools alongside the general schools. Every Saturday evening, Muslim girls and female meet in the community centers to discuss the ways of “attracting the non-Muslims towards Islam.”

They even get encouraged about ‘love jihad’ as well as “spreading Islamic values” into the Western societies. Being influenced by these community centers, Muslim girls and females are putting on hijab and burqa at an increasing number.

Muslim men are growing beard and are getting radicalized. With their clear identity of being a radical Muslim, they are continuing jobs in key government offices and even intelligence agencies, wherefrom they steal “required” information and data, which later go into the hands of radical Islamic rulers and mullahs in Iran and the Arab nations. Such trends are posing grave threat to UK’s national security. Muslims in the UK, in particular, are becoming a grave threat to the non-Muslim population.

Certainly yes! Islam is expanding in the West with an agenda – to bring those nations under Islamic sharia rule. Such ambitions are no different than those of Islamic State (ISIS). Initially though Muslims were putting emphasis on increasing its population in the West, now they visibly has entered the second phase – which is – establishing grip on the Western politics. Following the winning of Congressional election by radical Muslim females Rashida Tlaib and Ilhan Omar, Muslims might now become more confident about their future, where Muslims would have many representatives in the United States Congress as well as in other key establishments. Meanwhile, Islamic conquest in United Kingdom has already entered the third phase, where Islam and Muslims would emerge as a dominant player in politics and economy.