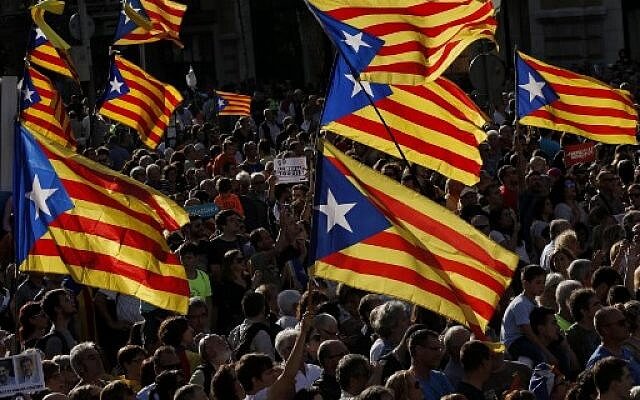 Europe is becoming increasingly anti-Israel and in most cases antisemitic. For reasons best known to them, some of the European nations such as France, Britain and Germany are violently pro-Palestine, while now the same trend of anti-Israel notion has started showing up in some other European nations such as Ireland and Spain. In the recent time, Ireland and Spain has began putting threat of recognizing Palestine should ‘peace talks’ in the Middle East do not advance. Madrid’s latest strategy of blackmailing Israel with the ‘recognition’ threat has already drawn criticism at home. A pro-Israel lobbying group in Spain warned that if the country recognizes a Palestinian state, Israel may do the same for the restive Catalonia region.

The head of the ACOM group, Angel Mas, issued the warning last week in an op-ed for the ABC daily. It came amid reports — which were confirmed Thursday by Spanish Foreign Minister Josep Borrell — that Spain is pushing the European Union to recognize what it is calling the State of Palestine. The reports said Madrid will recognize a Palestinian state regardless of the bloc’s position.

Catalonian separatism plunged Spain into a major crisis in October. Federal police clashed with voters over an illegal referendum on independence and the region’s parliament in Barcelona passed a motion declaring independence from Spain despite the federal government’s warning to desist. Madrid dissolved the regional government in a bid to block secession.

ACOM is one of Spain’s most high-profile organizations defending Israel and has won dozens of court cases, thanks to private funding by donors, against organizations promoting a boycott of Israel. On September 4, a court in Huelva in southwestern Spain scrapped a vote by the town of Ayamonte that declared the municipality part of Boycott, Divestment, and Sanctions movement against Israel, or BDS. The Spanish judiciary considers such actions discriminatory.

In his op-ed, Mas wrote that if Spain recognizes a Palestinian state, “there is a real possibility that Israel will decide to recognize Catalonia as a state.”

Ireland became the second European country in a week to say it will recognize Palestinian statehood if peace talks with Israel do not advance.

At a press conference in Dublin Saturday with Palestinian Authority Foreign Minister Riyad al-Malki, Irish Foreign Minister Simon Coveney said his country had planned to recognize a Palestinian state as part of a peace agreement between Israelis and Palestinians, but the lack of any advances in talks meant that “we may have to forget the second part of that,” according to the Irish Times.

Coveney suggested that Ireland, whose government is thought to be one of the most pro-Palestinian in Europe, would not be the only European nation to make the move.

“We have made a choice not to officially recognize the state of Palestine just yet,” he was quoted as saying. “But if this hopelessness continues in terms of the dialogue working we will be forced to review that for obvious reasons, as I think a lot of other countries in Europe will too.”

The comments came just three days after Spanish Foreign Minister Josep Borrell confirmed that Spain was pushing the European Union to recognize a state of Palestine. Earlier reports had said Madrid would recognize a Palestinian state regardless of the bloc’s position.

A day later, on Friday, after a meeting with French President Emmanuel Macron in Paris, PA President Mahmoud Abbas said France, too, was increasingly studying the possibility of recognizing a Palestinian state.

“The French certainly care a lot about that issue,” Abbas told reporters. “They are studying it more and more. They believe it is one of the most important issues on which they should focus their attention.”

Coveney met with Malki while Abbas was visiting Dublin on his way to the UN General Assembly gathering in New York.

Malki welcomed the idea as an opportunity for “the international community to take up its own responsibility to seek action when it comes to the Palestinian-Israeli peace process.”

Coveney also promised to up Ireland’s contribution to the UN’s aid agency for Palestinian refugees, UNRWA, by more than half, from roughly $5 million to some $8 million annually, to help make up for the Trump administration’s decision to cut the US contribution of over $200 million to the organization.

He also slammed the Trump administration’s closing this month of the Palestine Liberation Organization office in Washington, saying, “We need sustained dialogue if we are to make a breakthrough in the Middle East peace process. We believe that shutting down channels of communications is never a good idea.”

The Irish comments follow the July advancement by the upper house of Ireland’s parliament of a bill that would criminalize trade with Israeli companies based in West Bank settlements.

That bill was opposed by Coveney at the time. While the foreign minister said he could “emotionally connect” with the bill, lamenting the “deep injustice” that Palestinians have suffered for decades, he said there were important legal and political reasons to oppose the bill.

As a member of the European Union, Ireland did not have the right to ban the import of goods that are available elsewhere in the union, he said, and “passage of the bill would be a breach of European law.”

Perhaps even more importantly, Coveney added at the time, advancing the bill would sideline Ireland as a party that both Israelis and Palestinians would take seriously and greatly diminish Dublin’s ability to influence EU policy on the Middle East.

More than 130 countries have recognized a Palestinian state, but some of the international community’s most influential members, including France, the US and the UK, have not made such a move.

At a press conference at the EU headquarters in January, the PA president called on member countries to recognize “the State of Palestine,” contending such a step would encourage Palestinians to maintain hope for peace.

Israel has long held that recognizing a Palestinian state would harden the Palestinians’ negotiating positions, making it more difficult to reach a final peace agreement.

At the General Assembly, Palestinian officials have said Abbas plans to deliver an “extraordinary” speech calling on the international community to either rescue the two-state solution or bury it.

Like Loading...
Continue Reading
Advertisement
You may also like...
Related Topics:Barcelona passed a motion declaring independence, Irish threat of recognizing Palestine, The French certainly care a lot about that issue