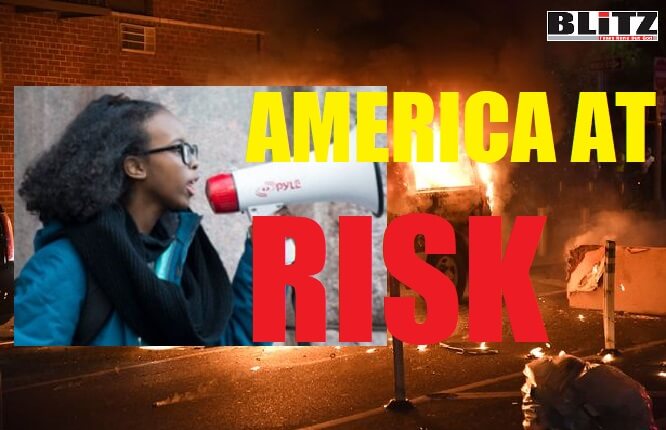 Residents of New York City have already witnessed the notoriety of anarchists and looters as they were setting fire on vehicles, including those of the law enforcement agencies, while many of those unruly ‘protestors’ were seen breaking into business enterprises and looting valuables. According to media reports, a large number of these anarchists were Palestinians, Arabs and Iranians, while there had also been thousands of radical Muslim migrants.

One of the two Brooklyn lawyers accused of trying to set fire on an NYPD cruiser used a Bud Light bottle stuffed with a rag as a Molotov cocktail. A Palestinian named Urooj Rahman (31) was snapped in a picture holding a black and white striped scarf close to her face with one hand and the potentially fiery bottle with another as she prepared to toss it out of the passenger-side window of a van. In the same vehicle, another man wearing a brown-color jacket is also seen in the photograph. According to credible sources, this man is a Jordanian national and there had been a large number of Palestinians, Iranians, Jordanians, Lebanese and Arabs, who enthusiastically had participated in the entire episode of anarchism and criminal activities such as looking of private and public wealth.

Somalian-born controversial Ilhan Omar was caught fueling the unruly mobs, anarchists, and looters in New York City claiming “our anger is just”, meaning she was delighted watching America burning. Hundreds of Muslim women wearing hijab were identified looting the stores, especially those owned by the Jews, as Omar’s own daughter Isra Hisri, promoted a list of supplies the looters and anarchists would need. She was even instigating those anarchists in physically assaulting Jews and Christians and “destroy their homes and business establishments. Some of the looters and anarchists were even chanting Allahu Akbar, during this extreme notoriety.

“I am heartbroken,” Omar tweeted. “Horrified at the needless death of George Floyd, another innocent black man murdered by police in our community. Frustrated that we keep finding ourselves in this position as a city. Angry that justice still seems out of reach”. Ilhan Omar not only watched the anarchists looting Target store, she even refused to condemn them. So was Democratic Party congresswoman Alexandria Ocasio-Cortez and Rashida Tlaib.

According to CBS News, “Multiple buildings were up in flames as the clock approached midnight, near the intersection of Minnehaha Avenue and Lake Street, which is where the precinct where people believe the four officers involved in the death of George Floyd worked”.

Seeds of anarchism spreading across the US

Following the massive anarchism, looting, and arson attacks in New York City, the wave of this notoriety has started spreading into other parts of the United States. Los Angeles, for example, has also witnessed the cruel acts of arson attacks, vandalism, looting, physical assaults, and even attempts of rapes by those unruly mobs, resulting in imposing the curfew.

Officials said the highly restrictive curfew has been ordered because of imminent danger to life and property during the hours of darkness, in the executive order.

The curfew is the harshest since the riots of 1992 when people took the streets following the acquittal of officers accused of using excessive force in the beating of Rodney King, according to Los Angeles Police Chief Michael Moore.

New York City has also been the site of several protests throughout its five boroughs. The last time such a curfew was enacted was during the race riots in Harlem, New York, in 1943 after a white police officer shot a black soldier in Manhattan.

The Democratic Party presidential candidate Joe Biden called the protests sweeping the nation a “wake up call” and repeated Floyd’s dying words, “I can’t breathe,” imploring Americans to try and “listen” and “understand” them.

Biden’s speech comes one day after Trump delivered remarks in the Rose Garden on Monday in which he promised to “mobilize troops” on American soil if governors failed to respond forcefully.

The former Vice President of Barack Obama, Joe Biden sharply criticized Donald Trump saying he was fanning the “flames of hate” stating Donald Trump has turned this country into a battlefield riven by old resentments and fresh fears.

It may be mentioned here that, while President Donald Trump and his administration were dedicatedly working for the American people during the toughest challenge posed by the coronavirus pandemic, Joe Biden had taken shelter inside the basement, wherefrom he was continuing election campaign.

Meanwhile, some of the left-leaning media in the US are claiming President Trump’s strong stand against the anarchists would put his re-election chances into flames. A few hours before President Donald Trump lambasted Joe Biden’s supporters as the “radical left working to get the Anarchists out of jail” and told governors they were “weak” for failing to crack down on protesters, his aides were emailing supporters with a memo that sought to cast President Trump as a unifying figure.

Commenting on the ongoing country-wide anarchism, the New York Magazine in an opinion editorial wrote: “Protests against racial injustices with a tinge (or more than a tinge) of violence haven’t matched the long history of white-mob outrages against African-Americans, but they are better known, augmenting old stereotypes of “roving bands of youths” burning buildings and police cars after initially peaceful protests were mishandled by authorities and spun out of control. It’s happened as recently as 2015 in Baltimore, 2014 in Ferguson, and 1992 in Los Angeles. But those “race riots” were too isolated to exert any large effect on American politics”.

It further said: “That a wave of “race riots” has broken out as Trump is in the throes of an existential fight to stay in power has to be looked on as a gift from heaven by many in his camp. That today’s Democrats are (to their credit) feeling much more pressure to identify with the victims of racial injustice than were their forbears over a half-century ago is just fuel for the backlash fires. Perhaps the current protests will subside or be channeled constructively, or they will be overshadowed by the daily violence of coronavirus cases and families and lives torn apart by the collapse of the economy. But when push comes to shove in October, you can bet that Republican campaign ads and social-media messaging will be aflame with images of rioters along with their alleged Democratic allies, the criminal illegal aliens”.

Policymakers in Washington are already struggling in tackling the extreme challenges posed by the coronavirus pandemic. Now, they have the extra burden of the countrywide anarchism and civil unrest, which may contribute in causing severe damage to the US economy.

Anarchism, the cases of Hong Kong and the US cities

When unruly protesters went into a massive rampage in the Chinese Province of Hong Kong last year, the majority of the western nations, especially the United States were continuing blaming Beijing for “violating democratic rights” of the civilians. During that time, westerners and Indians were secretly and openly extending support towards the groups of anarchists. For Washington, its interest in interfering into the internal affairs of China was crystal clear. Their ultimate goal was to establish an American colony in Hong Kong by mobilizing the students against Beijing. On the other hand, Indian policymakers were dreaming of weakening the might of China by helping Hong Kong residents in proclaiming independence, without realizing, such acts actually would backfire and in the near future, New Delhi may witness re-emergence of the separatist groups in most of its states, demanding independence. India may even face a very difficult challenge in ultimately holding control over Sikkim, which it annexed in 1975. Until now, China recognizes Sikkim as an independent state occupied by India.

Following the recent anarchism in America, the policymakers in Washington may now step into their own trap, if any tougher measures are taking against the arsonists, looters and anarchists, for the sake of maintaining law and order as well as for citizen’s safety. But any such actions may now be interpreted as “undemocratic” and “human rights violation” by the international community, as Washing has been extremely vocal when Chinese authorities were trying to stop the illegal demonstration, vandalism, arson attacks and anarchism in Hong Kong.