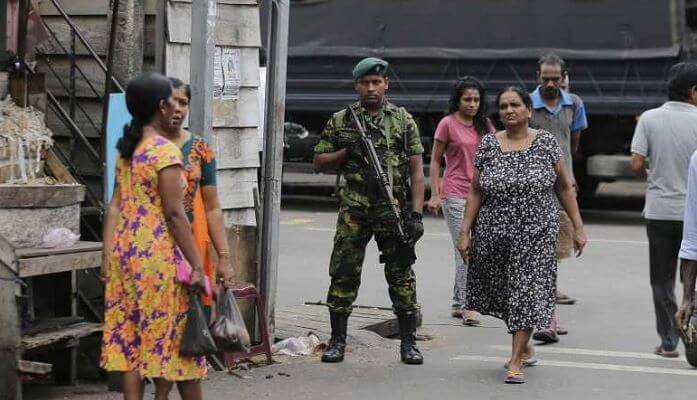 “Female bombers posing as devotees may have been planning to attack Sri Lanka’s Buddhist temples after authorities seized white clothes from a house that was raided following Easter Sunday blasts.” The jihad against Christian infidels is also threatening the Buddhist community and in fact all non-Islamic communities. Sri Lanka faces a big problem with Islamization. Although the Islamic State took credit for the Easter Sunday jihad bombing attacks that saw nearly 300 innocents murdered and hundreds of others injured, two local groups are believed to be behind the massacres. One is the National Thawheed Jammath and following a police raid of the group’s headquarters, another group Jammiyathul Millathu Ibrahim was discovered to be suspect.

There is another factor that impacts Sri Lanka: the insidious stealth jihad that works in tandem with its violent counterpart, although the former pretends to have nothing to do with the latter. For example, the Catholic archbishop of Colombo, Malcolm Ranjith, “met with ambassadors of Islamic countries who expressed condolences over the deadly Easter Sunday suicide bombings and assured him that there was ‘no connection to Islam.’” Unfortunately, the Cardinal believed them because they appeared friendly and concerned (as stealth jihadists generally do), despite the fact that among these envoys represented some of the worst jihadist-funding states.  Another example of Islamic supremacism at work in Sri Lanka: after the obvious decision to ban the burqa for security reasons, Muslim clerics in Sri Lanka became outraged and Hilmy Ahmed, vice-president of the All Ceylon Jamiyyathul Ulema organisation, which represents Muslim clerics, called the decision “stupid”, and somehow believed that the Muslim community should have been consulted about the burqa ban; despite the fact that the pressing issue is a national security emergency that affects all of Sri Lanka, and female jihadists can easily hide under the burqa.  The burqa is also a symbol of female oppression and sharia supremacy.

Female bombers posing as devotees may have been planning to attack Sri Lanka’s Buddhist temples after authorities seized white clothes from a house that was raided following Easter Sunday blasts, a media report said on Monday.

The Sri Lankan intelligence agency has received inputs of possible attacks on Buddhist temples by female bombers of the banned local terror outfit National Thawheeth Jamath (NTJ) after police found white pairs of skirts and blouses from the house which was raided after the explosion in Sainthamuruthu area in the Eastern province, raising suspicion that the attackers might pose as Buddhist devotees, the Daily Mirror reported.

On March 29, Muslim women had spent 29,000 Sri Lankan rupees (USD 166) to purchase nine sets of such clothes from a textile shop in Giriulla, the report said. The CCTV footage of the shop shows the visuals of these women who purchased clothes from the shop.

So far, five sets of white clothes have been found from this house and intelligence services are trying to find the remaining clothes. Sri Lankan authorities say that there was one women among the nine bombers who carried out the country’s worst terror attack, killing 253 people and injuring over 500 others.