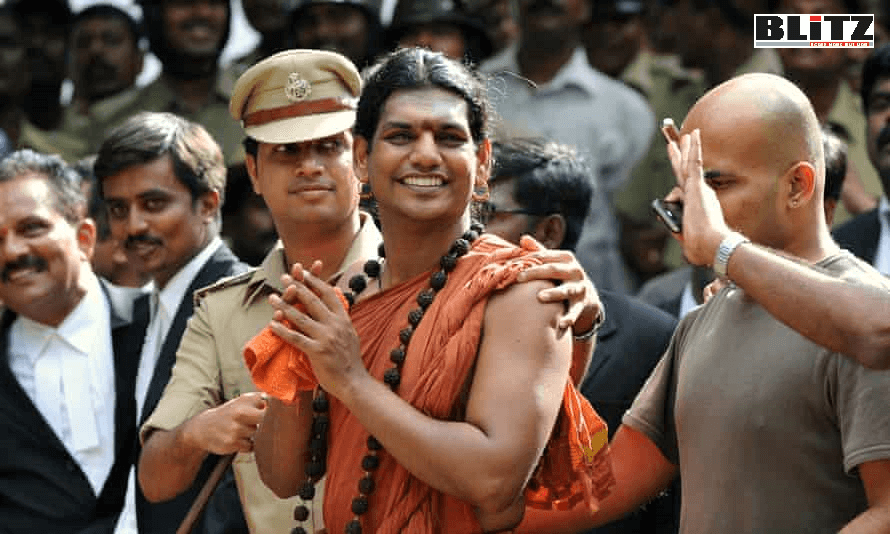 Stories of fake and fraudulent godman in India PART-3

Nithyananda’s assets are said to be worth more than Rs 2,000 crore, his Bidadi ashram near Bengaluru alone is spread over 400 acres of land. He has ashrams near Ahmedabad, and the world over.

India is a spiritual land with plenty of yogis, saints, siddhars and spiritual leaders and that paved the way for the land being called as ‘Punniya Bhoomi’

But, in recent times fake godmen are mushrooming and cheat gullible people who come to them seeking solutions for their problems. Their misdoings comes to light when these godmen get caught in the police net. Though not everybody gets caught, there are many who are still out there doing business as usual as people do not prefer a police complaint fearing disgrace.

To stop people from falling victims to these fake babas and to prevent non-belief on the Hindu religion, Akhil Bharatiya Akhara Parishad, the apex body of Hindu sadhus, has released a list of fake sadhus.

A spiritual leader who sold spirits

Asaram Bapu, aged 78, is said to be involved in many illegal businesses including arrack selling. Later, he embraced spiritualism and ruled the roost for more than 30 years.  He had an ashram in Sabarmati. In all, he had more than 400 ashrams in India and in several foreign countries. He has assets worth Rs 800 crore. He has eight BMW cars and several other vehicles. There were charges of land grabbing and encroachment cases against Asaram Bapu. He was charged with sexually harassing young girls and his son Narayan Roy was also accused of sexual abuse. Asaram Babu had strong political links to disprove charges against him. He was running 40 boarding schools.

In 2008, four students of one of his school died under suspicious circumstances. It was widely believed that the students were sacrificed for some tantric practice. Police refused to file a charge-sheet given his political connections with chief ministers and even the prime minister. When an inquiry commission was set up against him, his disciples went berserk and unleashed largescale violence. But the court issued a nonbailable arrest warrant in a sexual harassment case. At present, Asaram Babu and four of his disciples are serving 20 years imprisonment.

He was hailed as a powerful nerve center with six crore disciples in several north Indian states including Rajasthan, Punjab and Haryana. Political leaders of several parties including Congress and BJP used to flock to his ashram seeking his support during election campaigning. He owns three hospitals and 13 huge educational institutions. He has also produced and directed five feature films. Also, he has released several music albums as he is a good singer.

His ashram was called ‘Dera Sacha Sauda’ and he declared himself as an incarnation of Lord Krishna and said Gopikas who joined him would be cleansed of all their sins. Lord Krishna as portrayed in epics is a Brahmachari. Lord Krishna was involved in romantic plays and never overstepped into lust. But Gurmeet Ram Rahim Singh seduced several women in the name of Lord Krishna. An affected woman wrote letters to the then Prime Minister A B Vajpayee and other leaders. But then, it was not easy to accuse Ram Rahim Singh or enquire against him.

Journalist Ramchand bravely exposed the truth about Gurmeet Ram Rahim Singh. An irated Gurmeet shot him. Even then it was difficult to arrest him, after 17 years of prolonged fight, Haryana High Court took the case suo moto and ordered his arrest. More than two lakh devotees gathered and prevented his arrest. Police had no other go but to resort to shoot out in which 35 people lost their lives and 300 were badly injured. Large scale violence was unleashed in five north Indian States. Buses and rail coaches were burnt. Finally, justice prevailed and Gurmeet is now in jail.

Rampal Maharaj, who declared himself an incarnation of God, was once an engineer with the Haryana Water Supply and Sewerage Board. He said he was from the Kabirdas’ lineage. His talks attracted lakhs of people and it paved the way to amass wealth to the tune of Rs 100 crore. When he spoke against Arya Samaj in 2006, violence broke out and he was charged with murder. Again his name was included in the murder case of four men. The court ordered his arrest. Over 10,000 people shielded him from arrest. Police resorted to shoot out and eight people sacrificed their lives and several got injured in that incident.

Tailored herself as Durga Maa

She was hailed as the incarnation of Goddess Durga. A fourth-standard literate who got married to a poor man at 17 and worked as a tailor to make both ends meet. At 23, she embraced spiritualism and became famous. Popular filmmaker Subhash Ghai is her disciple. Several actors and actresses became her disciples. She was also involved in several social service activities. One day she would dress like a Goddess and the next day, she would appear in a glamorous dress. She was enigmatic. There were numerous complaints against her including dowry and sexual harassment and for abusing religious sentiments. Facing all these charges now she is in and out of jail.

Even in Tamil Nadu, there are many such fake godmen, who get exposed and arrested. Recently, Perumalmani alias Selvamani was arrested for molesting 50 women in Ongur, Tindivanam.

The Income Tax department raided the premises of Vijayakumar, a Life Insurance Corporation’s former employee, who declared himself as Kalki avatharam, and confiscated 88 kg of gold, five kg of diamonds, and land documents for 44,000 acres from him. They also found that he was involved in tax evasion to the tune of Rs 1,000 crore.

A few years ago, Sri Lankan Premkumar, who migrated to India, in the name of Premananda attracted huge crowds with his tantric acts and collected huge money. He was also convicted in rape of girls and murder of his assistant and was decreed to undergo a double life sentence. Despite that, his ashram is abuzz with devotees even now. Though the other side of these godmen are well known, there are faithful followers.

Not just in India

Grigori Yefimovich Rasputin was a Russian mystic and a self-proclaimed holy man. He was hailed as God and even the royal family held him in high esteem. He did not fail to attract even the queen, who fell prey to him and that led to his mysterious death in 1916.

David Koresh was an American cult leader of the Branch Davidians sect, claiming to be its final prophet. He had a huge following. Sometimes he gets involved in dangerous acts. Following numerous complaints, the law enforcing agency asked him to surrender. He refused and ordered his people to shoot the police officers. After a 51-day intense fight, he along with his 80 and odd followers immolated in fire and died.

During the pandemic, several fake godmen have made foul bids of making money by fooling the people. At least a dozen of such fake godmen were rounded by the law enforcement agencies since January this year.

Dear readers, just Google – Fake, godman, godmen – and you will be surprised seeing so many items on the Internet about those godman or baba in India – who are making millions of dollars by cheating people.