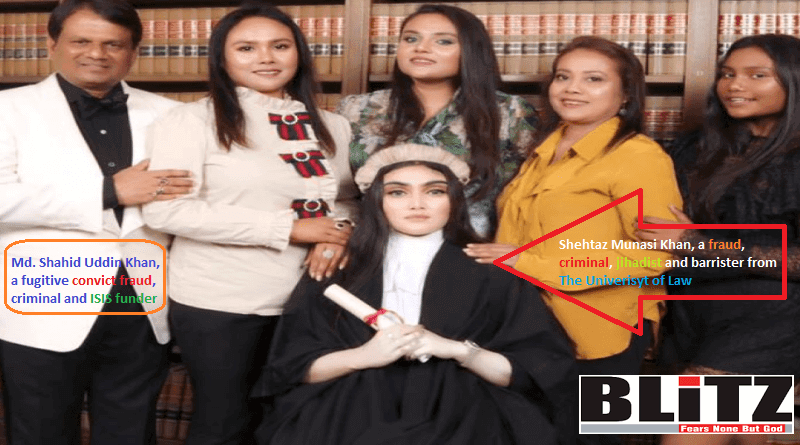 Britons generally are considered as one of the civilized societies in Europe. But unfortunately for past few years, due to rogue policies of welcoming dirty money from around the world, large number of frauds, criminals and even militants and terrorists are entering the country with tons of dirty money and even are obtaining immigrant status under investor’s category. According to our records, major segment of those entering the United Kingdom as investor are either criminals, frauds, or terrorists and militants. Few of them even are directly linked to notorious jihadist outfits such as Al Qaeda and Islamic State (ISIS). Here is the story of a London-based barrister, who gradually is melting in the society in Britain by concealing facts of her criminal records as well as affiliations with ISIS.

Shehtaz Munasi Khan obtained degree from ‘The University of Law’, Braboeuf Manor, Old Portsmouth Rd, Guildford GU3 1HA, UK. Founded in 1962 as the College of Law, it is the UK’s largest law school. The College of Law was granted degree-awarding powers in 2006, and in 2012 it became the UK’s first for-profit educational institution to be granted university status. University of Law has eight campuses across England. Unlike many law schools in the UK and around the world, the university was not ranked in Times Higher Education World University Rankings as it excluded small and specialist institutions. Amongst the notable alumni, Sadiq Khan, Mayor of London, Sayeeda Baroness Warsi, David Gauke, Conservative Member of Parliament for South West Hertfordshire, Secretary of State for Justice, and Lord Chancellor since 2018 and many more distinguished individuals are from this university. What they possibly are not aware of is — one of the alumni of The University of Law is a criminal, fraud, money launderer and member of Islamic State.

Immigrant status, criminal past and connections with D-Company:

According to our records, Shehtaz Munasi Khan, daughter of Md. Shahid Uddin Khan and Farjana Anjum had entered United Kingdom in 2009 along with her family by investing two million pounds in exchange of immigrant status under Visa Tier 1, vide VAF Number 511702. This family not only had invested two million pounds for the Visa Tier-1 but also has invested huge amount of money in various businesses in Britain. But, most important fact is – the entire amount was smuggled into the United Kingdom through illegal channel. In other words, this family has laundered millions of dollars and invested the amount in Britain. They also have smuggled-out millions of dollars from Bangladesh and invested in dubious business interests in the United Kingdom. One of their business associates in UAE is the infamous D-Company, a trans-national racket of illegal arms, narcotics and counterfeit currency dealers, operated by notorious criminal and terror-kingpin Dawood Ibrahim. Dawood fled India many decades back and according to media reports, he has been under the shelter of Pakistani spy agency Inter Service Intelligence (ISI).

On March 12, 1993 there had been 12 bomb explosions in the Mumbai city in India, which resulted in 257 fatalities and 713 injuries. The attacks were reported to be coordinated by Dawood Ibrahim, at that time, leader of the Mumbai-based international organized crime syndicate named D-Company. Dawood had ordered and helped organize the bombings through his subordinates named Tiger Memon and Takub Memon.

Dawood Ibrahim though is using Dubai as one of the key-bases of his illegal activities, according to Indian intelligence agencies, he is currently residing in Pakistan, wherefrom he heads the Indian organized crime syndicate named D-Company which he founded in Mumbai in the 1970s. Dawood is wanted on the charges of murder, extortion, targeted killing, arms and drug trafficking, terrorism and various forms of criminal cases. He was designated as a global terrorist in 2003 by India and the United States with a reward of US$ 25 million for his capture. In 2011, Dawood Ibrahim was named number three on the world’s 10 Most Wanted Fugitives by the Federal Bureau of Investigation (FBI).

How the London-based barrister’s family came into contact of Dawood?

The United States Department of the Treasury designated Dawood Ibrahim as a terrorist as part of its international sanctions program, effectively forbidding US financial entities from working with him and seizing assets believed to be under his control. The Department of Treasury keeps a fact sheet on Dawood which contains reports of his syndicate having smuggling routes from South Asia, the Middle East and Africa shared with and used by terrorist organization Al Qaeda. The fact sheet also said that Dawood’s syndicate is involved in large-scale shipment of narcotics in the United Kingdom and Western Europe. He also is believed to have had contacts with Al Qaeda leader Osama bin Laden. In the late 1990s, Dawood Ibrahim travelled to Afghanistan under the Taliban’s protection.

As barrister Shehtaz Munasi Khan’s family needed to smuggled-out millions of dollars from Bangladesh, which they earned through frauds and criminals activities, Munasi’s father Md. Shahid Uddin Khan sought help from one of his top accomplice named M. Sajjad Hussain, who has been working for Pakistani ISI for decades. It was Sajjad who had connected Khans to D-Company. Later Md. Shahid Uddin Khan, his wife Farjana Anjum and daughters Shehtaz Munasi Khan (later became a barrister) and Parisa Pinaz Khan had expressed strong desire of working under Dawood Ibrahim’s racket. Subsequently they invested few million dollars in the illegal drug trade of Dawood and have been taking care of a part of narco-shipments to the United Kingdom. After joining hands with D-Company, the Khans are becoming dramatically wealthy, while the British authorities, including their intelligence agencies are not raising any question either about the source of income of this family nor as to why the family had brought in millions of illegal money into the United Kingdom.

A criminal becomes a barrister in London

A barrister is expected to have clean background. But, seeing the criminal past of barrister Shehtaz Munasi Khan and her entire family, anyone can now ask, are the esteemed lawyers in the UK feeling delighted in working with a notorious criminal and jihadist love wolf being their fellow-lawyer?

Barrister Shehtaz Munasi Khan’s father was convicted in a criminal case on April 24, 2019 in Bangladesh by Kaisarul Islam, the 4th additional chief metropolitan magistrate in Dhaka under Section 468 (forgery for the purpose of cheating), 471 (using forged document for cheating) and 109 of the Bangladesh Penal Code, with five year’s rigorous imprisonment and fine amounting to Taka Ten Thousand.

There are several criminal cases against barrister Shehtaz Munasi Khan including a case lodged under the Money Laundering Prevention Act. She also is facing criminal cases for years in Bangladesh for cheating various individuals and financial institutions as well as defaulting bank loans.

Militancy connection of the Khans

Members of Barrister Shehtaz Munasi Khan’s family are facing a case lodged under the Anti Terrorism Act in Bangladesh as the Counter Terrorism and Transnational Crime unit of Bangladesh Police had recovered huge number of illegal weapons, ammunition, detonator, and counterfeit currency and jihadist propaganda materials of Islamic State. It was clear from evidences seized from the Dhaka residence of the Khans that they were actively involved in terror-financing and were patronizing militancy in Bangladesh.

What Khans are doing from London?

First of all, the amount the Khans are spending in the UK are many folds bigger than the amount they are showing as monthly income. The family is travelling around Europe, Asia and other continents under the disguise of tourists. But the real agenda of their trips is related to narcotics, illegal weapons, counterfeit currency and jihadist activities. According to media reports, Shehtaz’s younger sister Parisa Pinaz Khan had visited Russia on a secret mission and it is anticipated that the woman might have been picked up by the Russian secret service as their deep-cover agent in London.