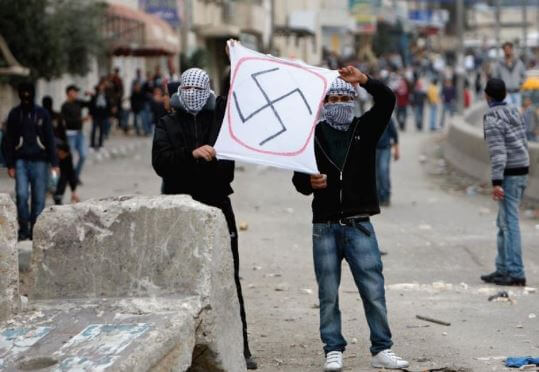 In his book Myths of the Middle East, Arab  essayist and historian Joseph Farah  writes..

​”There has never been a land known as Palestine governed by Palestinians. Palestinians are Arabs, indistinguishable from Jordanians, another recent invention, Syrians, Iraqis, etc. Keep in mind that the Arabs control 99.9 percent of the Middle East lands. Israel represents one tenth of one percent of the landmass. But that’s too much for the Arabs. They want it all. And that is ultimately what the fighting in Israel is about today…No matter how many land concessions the Israelis make. It will never be enough ”.

Published in October 2000 , we can only admire the intellect , instinctive power , pragmatism and foresight of this elegant scribe . Written before Israel gave back Gaza his prophetic essay is validated by the actions of Israel’s opponents. Enemies of Israel within the United Nations conveniently ignore truth and are content hiding their anti Jewish State rhetoric under the cowardice of supposed pro Palestinianism. Such support for Palestinians however does not include the following –

the slaughter of Arab Palestinians by a combination of Jordanian and Pakistani troops commanded by General Zia Al- Haq who later became Prime Minister of Pakistan. The numbers killed have never been acknowledged but are estimated to be between five thousand and twenty seven thousand with at least one hundred thousand ethnically cleansed to Tunisia. These events occurred during and after ‘Black September’ 1970.

The mass murders , torture and imprisonment of Palestinians by Iraqi Government and Shia militias backed by both Iraq and Iran in the Palestinian areas of Iraq, such as Al – Doura, Al – Houraya, and Al- Baladiyyat in Baghdad , 2003 -2004.

It would not surprise you therefore to be told that the current onslaught on Palestinians by Syrian, Russian and Iranian troops has attracted no support for Palestinians from their most vocal supporters within the United Nations . Nor is the plight of those Palestinians incarcerated and tortured in Assad’s dungeons attracting any commentary , UN Resolutions or hastily convened UN sessions. Venezuela, Cuba and Pakistan  for example have kept their  united , pro Palestinian mouths silent . Indeed their so Palestinian support is very selective – cowardly and Jew hating would be more appropriate descriptions.  How perverse that the Iranians are simultaneously massacring Palestinians in Syria, simultaneously supporting Hamas in Gaza. The BBC and other mainstream western media outlets purposely ignores this phenomenon probably due to a bigoted agenda rather than professional incompetence both of which run through the DNA of the BBC.

The  racist legislators in the Republic of Ireland are seeking to pass legislation against Israel which would criminalize those purchasing Israeli products in Ireland in support of Palestinians.  Unsurprisingly they have no intention to pass similar legislation against Iran, Syria, Russia, Iraq , Jordan, nor Pakistan for their human rights abuses against Palestinians  – only the Jewish State is the subject of the Irish wrath.

​It is impossible to wrong all the rights, to challenge all the opposition, to correct all the lies and propaganda spewed out so virulently by Israel’s opponents but at least challenges can be originated and  may be effective or command media attention and expose the Jew haters.

One such challenge is a grass roots movement   #BROIGAS.

This acronym ironically stems from a Yiddish word meaning anger and now stands for the following.

Thousands of ordinary people are  ‘ Boycotting those who Boycott’. In other words the disgraceful proposed anti Jewish legislation passing through Ireland’s Parliament is coming at an economic price. Consumer products with Republic of Ireland or ROI are being shelved in protest; holidays to Ireland are being cancelled and funds managed in Ireland are being transferred to other domiciles. These are just a few of the challenges being mounted against the 1930’s type Nazi legislation seeking to economically boycott the only Jewish State in the world by the Republic of Ireland.

These souls were stripped of their pensions and were not allowed to work  for Government, Government suppliers or contractors.

Ireland allowed wanted Nazi war criminals to escape justice and allowed others to live in the bosom of Irish society. Ireland would not allow five hundred children from France into Ireland to escape the Nazis – BECAUSE THEY WERE JEWISH CHILDREN. Thy were all gassed in the camps.

Even to this very day Ireland are the only country in the world to openly display memorials to Nazi collaborators. The current head of Sinn Fein, Mary Lou MacDonald paid homage to such memorials – it will therefore come as no surprise for you to learn that it is this party leading the antisemitic legislation.

So you see support for Palestinians is in fact a euphemism for antisemitism.