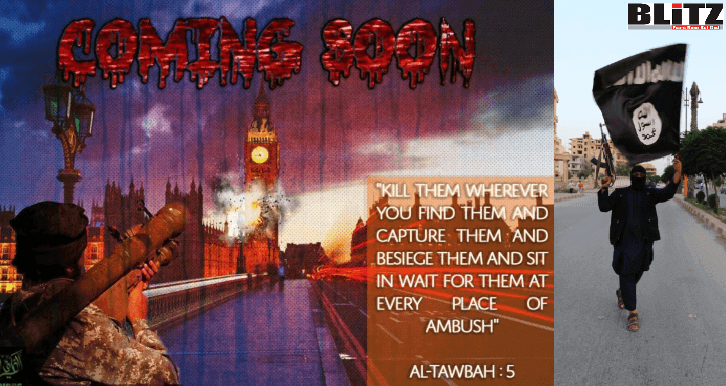 In one of the posters, which were released by Islamic State (ISIS) supporters, it read “Kill them wherever you find them and capture them and besiege them and sit in wait for them at every place of ambush”.

According to British tabloid The Sun, ISIS supporters have threatened to bomb London and New York and attack a plane in a series of chilling posters.

Threats of jihadists attack in the US on July 4?

Although the released posters did not specify any date of such attacks, research group TRAC Terrorism has warned that the United States is at bigger risk of an attack than the United Kingdom because of the upcoming July 4th national day celebration.

The propaganda does not specifically mention the US holiday, but the ISIS supporters vow to pursue “infidels in their own homeland”.

“Know O Crusader infidel that you – Allah willing – will soon be pursued in your own homeland,” it reads.

“You will be pursued in the streets and in the alleyways and you will burn by the flames of the IEDs.

“Only this time you will be feeling the pain of what you have inflicted for decades upon the Muslims, of killing, burning, destruction and displacement in refugee camps.

“What is coming will – Allah willing – be directed at you, and in your own homeland.

“So be on the lookout until then”.

Britain can be attacked any time

A Kurdish commander has also warned that thousands of ISIS fighters are now on the loose and forming sleeper cells that could attack the UK at any time.

Mervan Kamishlo, a commander in the Syrian Democratic Forces, said that members of the defeated caliphate have gone to ground in Syria and are now plotting revenge attacks on countries such as Britain.

Western-backed Kurdish forces have led the fight against Islamic State, which has now lost almost all the territory it was able to capture amid the turmoil of Syria’s ongoing Civil War.

Commenting on the anticipation of jihadist attacks in the US and Britain, counter-militancy expert Salah Uddin Shoaib Choudhury said, “It is very much unlikely that the United States will come under jihadist attacks on July 4, because, jihadist outfits like ISIS does not make prior announcements of their plot. But of course, the posters aren’t mere prank. Rather it can be an alarming sign of ISIS becoming much more aggressive and even confident in comparing to its previous status”.

Mr. Choudhury said, “In my personal opinion, Britain is now much vulnerable to jihadist attacks as there are signs of the rise and spread of radical Islam at an alarming level. While the US security agencies need to remain vigil especially during the first week of July, law enforcing and intelligence agencies in the United Kingdom should closely monitor activities of the Muslims particularly in areas where Muslim population is very large. There should also be special surveillance on the mosques in Britain as well as in the United States and other Western nations.