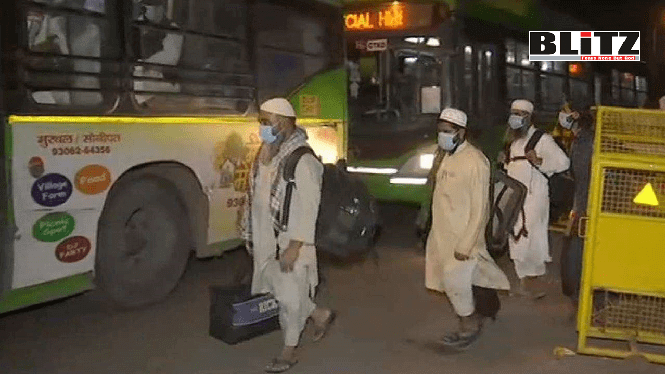 According to a report published in The New Indian Express [TNIE] newspaper, a person claiming to be a member of Tablighi Jamaat [TJ] in Bangalore has sent a legal notice objecting to the article written by S Gurumurthy in TNIE [dated 2. 4. 2020] titled “Tablighi Jamaat — Its other, evil side” as defamatory. While TNIE has responded to the notice, significantly, no official of TJ has so far challenged the contents of the article.

The aforesaid article titled “Tablighi Jamaat — Its other, evil side” was published in TNIE, where the author S Gurumurthy has used a number of references from various articles written by counter-terrorism specialists around the world, including a 173-page article titled ‘Tablighi Jamaat: Wolf in sheep’s skin’ written by Salah Uddin Shoaib Choudhury, multi award winning anti-jihadist journalist, counter-terrorism specialist and editor of Blitz.

It may be mentioned here that, Mr. Choudhury, since 2002, has been doing extensive research on the rise of radical Islam and jihadism around the world. He has written numerous articles and books on radical Islam and jihadism and has also contributed articles on these topics for a number of top-research organizations including the Gatesstone Institute, USA. During past 18 plus years, none of the contents of his articles had ever been challenged by Tablighi Jamaat or any other Islamist groups.

Meanwhile, TJ men are continuing to give threats on Mr. Choudhury.

Commenting on the recent activities of Tablighi Jamaat, Mr. Choudhury said, “TJ clearly is the antechamber of terrorism and jihad. It is a very disturbing fact that organizations like TJ are being allowed to continue its notorious activities in India and other parts of the world, although it has been proved a number of times about its direct connection with Al Qaeda and other jihadist outfits.

“During the challenging situation of coronavirus pandemic, when the Indian government has been working hard in saving its huge population from being hit by Covid-19, a notorious nexus of jihadists, under patronization of Pakistani spy agency Inter Service Intelligence (ISI) have declared #coronajihad, with the notorious agenda of infecting and killing hundreds of millions of Hindus thus finally bringing India under the flag of radical Islam.

“Defying country-wide lockdown in India, more than two thousand members of the radical Tablighi Jamaat attended its congregation from March 13-15 at Markaz in Nizamuddin area in the Indian capital New Delhi. During this congregation, leaders of Tablighi Jamaat had called upon the coronavirus infected members of the group to consider coronavirus as a blessing from Allah and use it as a weapon for spreading the virus amongst the ‘infidels’.

“Intelligence agencies suspect some of those who had attended the Tablighi Jamaat event had ISIS connections and that the open defiance of the lockdown was a result of the terror organization’s or other Islamic terror groups’ instructions to them to turn into virtual human bombs, which they could do even as carriers of coronavirus.

“According to media reports, hundreds of attendees of the TJ congregation have already been tested as coronavirus patients, while an unknown number are already out of the radar of the law enforcing agencies.

“Security experts say, these missing TJ men are most likely engaged in spreading Covid-19 amongst the non-Muslim populace in India.

“However, #coronajihad started trending on Twitter soon after the death of patients who attended the Tablighi Jamaat congregation. Twitter users said that the congregation was organized, flouting Delhi government’s orders against gatherings.

“According to a Twitter user, Corona Jihad is “Infected Muslims want to go and spread Corona to Kafirs (Infidels) so they can die in hundreds of thousands. Their Idea: A few hundred Muslims will die, but they can make up for it by making more children. Use the Corona to kill more Kafirs”.

Unfortunately, a segment of the mainstream media in India is either unwilling of failing yet to understand the gravity of the threat posed by Tablighi Jamaat. Some of the Indian media even are making frantic bids in portraying Tablighi Jamaat as an innocent organization that counters jihad. What those Indian media pundits do not understand is, Tablighi Jamaat has been proved to have links with jihadist outfits in a number of countries”.

Salah Uddin Shoaib Choudhury has also elaborately mentioned a recent case, where TJ member was found giving instigation to other Muslims for spreading #coronajihad amongst non-Muslims in India and other countries in the world.

According to an article written by Mr. Choudhury, coronavirus infected Muslims in India are spreading the virus through licking currency notes as well by wiping nose on it, at the clear instruction from a few top brasses in the organization. Coronavirus contaminated currency notes are being circulated into a number of western nations as well as Israel. Pakistani spy agency Inter Service Intelligence (ISI) has been smuggling out coronavirus contaminated currency notes into India through a number of cross-border smuggling rackets.

A twitter message from the Nashik Rural Police in India claims, it has taken actions against a Muslim man whose video of licking and wiping nose with a bunch of currency notes and calling Coronavirus a punishment by Allah was doing rounds on social media.

The video showed a Muslim man taking a bunch of currency notes and licking them with his tongue and wiping his nose with them. He says that the coronavirus has no treatment because it is sent by ‘Allah’, implying that he is going to pass those currency notes around, to spread the disease.

The Muslim man in the video uses few 500 denomination notes to wipe his nose and mouth as he looks into the camera and says: “There is no cure for a disease like corona because it is the punishment of Allah, for you people.”

According to a credible intelligence source, attendees at the Tablighi Jamaat in India were asked by some of the leaders to spread coronavirus amongst the non-Muslim society through currency notes by licking and wiping the nose of the Covid-19 patients.

A similar message was passed onto radical Muslims and members of Tablighi Jamaat in the United States, Canada, the United Kingdom, France, Italy, Germany, Spain, Sweden, Denmark, the Netherlands, Australia, Russia, and Israel. Muslims are reportedly contaminating those currency notes with Covid-19 virus by sitting at their homes or the community mosques and later circulating amongst non-Muslims. This trend is at an alarming level in the United Kingdom, in particular, where this “coronajihad” tactic is being followed by the members and supporters of Muslim Brotherhood, Hezbollah, Hamas, and other jihadist outfits.

Although Pakistani spy agency ISI has been circulating counterfeit Indian currency notes for decades, in recent times it has started circulating real currency notes, which are being contaminated with coronavirus. During the past few weeks, Pakistani spy agency reportedly has circulated more than four billion Indian rupees of various denominations.