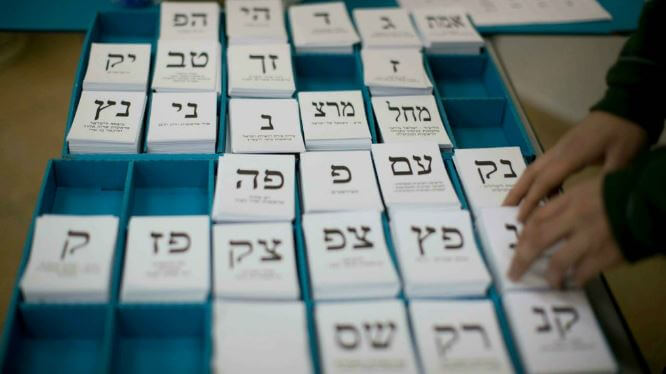 Benny Ganz and Yair Lapid came onto the stage together and announced the launch of the new Blue and White coalition to lead the country after the upcoming Israeli elections.

Benny Ganz said that his mother and Lapid’s father lived in the same ghetto in Budapest during the Holocaust years.

“I will be your next Prime Minister,” he said, “and we are changing the face of Israeli politics to one of blue and white. We are open to left and right. Everyone, the religious, Jews, Arabs, Christians, Druze, will play an integral part of Israel. We will raise a new flag of HaTikva, Hope.”

Lapid said that “we have a winning team. Benny Ganz will be an excellent Prime Minister.”

They were following onto the stage by Moshe ‘Boogie’ Yaalon and Gadi Ashkenazi, both top military leaders who served as IDF Chiefs of Staff. Yaalon was also Defense Minister.

Then the various Israeli TV channels gave out the results of their latest polls. Channel 13 had Ganz-Lapid at 36 seats and BIbi at 26.

A minimum 61 seat coalition is required to form an Israeli government.

Then Benjamin Netanyahu appeared at his own press conference from Kfar Maccabiah and began to deconstruct the Blue and White celebration.

“I heard the slogans,” he said, “as if there is no country. But Israel is an exceptional state with a strong economy, a strong military, and infrastructure.

“I heard that Ganz-Lapid will create an opposing bloc. This will be a left-wing party that answers to the voice of Arab politicians that don’t recognise Israel. Absurd! They talk of centrist unity but they are a movement of the Left.

“I fought against Palestinian terrorism. I risked my life. While I was doing that, Lapid wrote for a magazine, rather than serve his country.

“They say the country is in bad shape. It has never been in a better place because of our talents and deeds. We have a flourishing economy, a leadership that is bringing foreign countries to open their embassies in Jerusalem, opening the way for Arab and Muslim states that have never recognized us before.

“We are building our nation. We have record unemployment. We have natural gas, cyber, hi-tech.

“With me as Prime Minister you are no longer afraid to get on a bus as it was under the left.

“Ganz and Lapid agreed the Iran deal. Lapid said, ‘what other choice do we have?’ but I went to the US Congress to make our case. I fought with the American President. I stood up to the pressure.

“Lapid and Ganz want to move 80,000 to 90,000 Israelis. With me that won’t happen. I stood up to US presidents against the removal of Jews from their homes.

“You are not a good leader if you are soft and giving. You have to believe in something.

“Both of them are economic failures. Lapid failed as Finance Minister. Gaza bankrupted his company. They proved their economic inability.

“They brought in a left wing trade union monopolist into their team.

“I am proud of our achievements and successes. They have a concept of a Palestinian state next to Tel Aviv, Afula.

“Whoever votes for Ganz-Lapid votes left. Those that stay home, vote left. Those who vote for radical right-wing parties, or for the parties that will not make the minimum threshold to enter the Knesset, vote left.”

It is clear that the battlelines have been drawn for a hard fought Israeli election campaign.