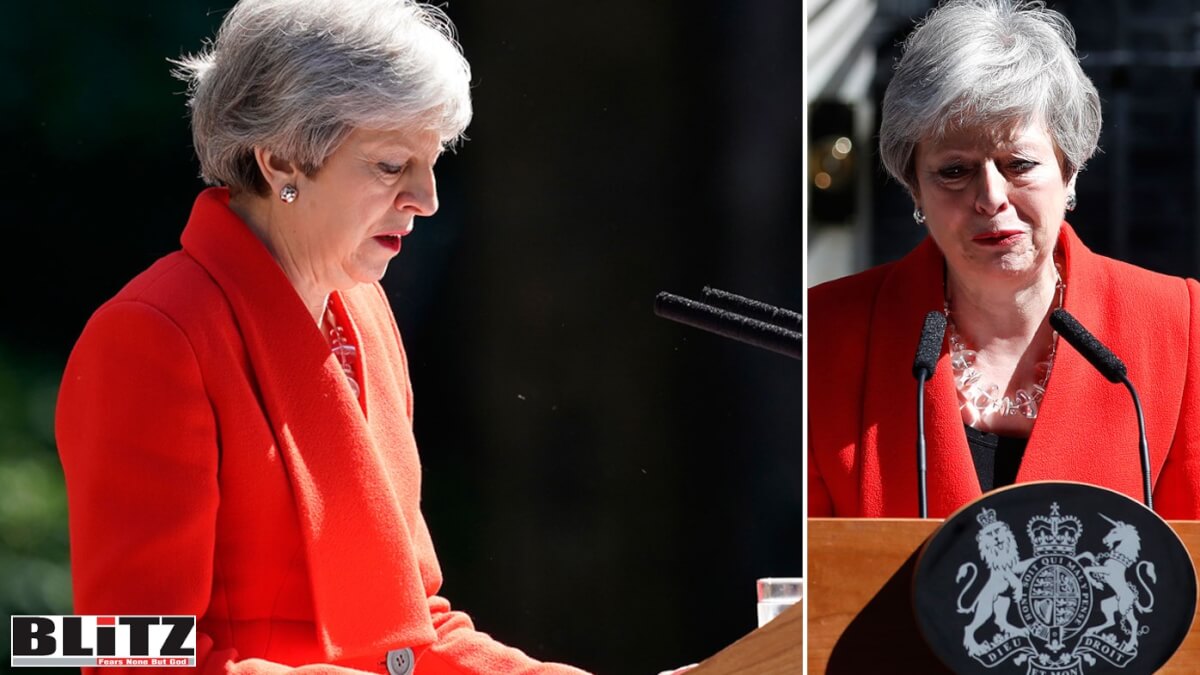 Should Britain remain in the European Union or exit? This has been a question ever since Britons voted in favor of leaving EU. Boris Johnson is possibly going to be the successor of Ms May. But it’s unclear whether the next Prime Minister will have any luck reopening the deal, which Brussels has insisted is locked down. May’s successor will face the same deadlocked House of Commons, which has repeatedly rejected her plan but failed to vote in favor of any kind of alternative.

Some pro-Remain politicians expressed concern that a Brexiteer could soon take May’s place and push Britain towards a hard Brexit.

“The prospect of an even more hardline Brexiteer now becoming PM and threatening a no deal exit is deeply concerning,” Scotland’s First Minister Nicola Sturgeon said on Twitter.

In an emotional statement, British Prime Minister Theresa May said she had done her best to deliver Brexit and it was a matter of “deep regret” that she had been unable to do so.

But Ms. May will continue in the office until Conservative leadership contest takes place. It means she will still be prime minister when US President Donald Trump makes his state visit to the UK at the start of June.

Boris Johnson, Esther McVey and Rory Stewart have said they intend to run for the party leadership, while more than a dozen others are believed to be seriously considering entering the contest.

In her statement on Friday, she said she had done “everything I can” to convince MPs to support the withdrawal deal she had negotiated with the European Union but it was now in the “best interests of the country for a new prime minister to lead that effort”.

She added that, in order to deliver Brexit, her successor would have to build agreement in Parliament.

“Such a consensus can only be reached if those on all sides of the debate are willing to compromise,” she said.

Ms May’s voice shook as she ended her speech saying: “I will shortly leave the job that it has been the honor of my life to hold.

“The second female prime minister, but certainly not the last.

“I do so with no ill will, but with enormous and enduring gratitude to have had the opportunity to serve the country I love.”

Following the announcement of resignation by the British Prime Minister, Labour Party leader Jeremy Corbyn in a Tweet said, Theresa May is right to resign. She’s now accepted what the country’s known for months: she can’t govern, and nor can her divided and disintegrating party.

Whoever becomes the new Tory leader must let the people decide our country’s future, through an immediate General Election.

British Foreign Secretary Jeremy Hunt tweeted, I want to pay tribute to the PM today. Delivering Brexit was always going to be a huge task, but one she met every day with courage & resolve. NHS will have an extra £20bn thanks to her support, and she leaves the country safer and more secure. A true public servant.

Julian Smith, MP tweeted The values, integrity & commitment of @theresa_may to the United Kingdom have been outstanding.

Chancellor Philip Hammond tweeted, Theresa May has served this country as Prime Minister with great dignity & commitment for nearly three years. She has worked tirelessly to deliver Brexit & to forge the compromise that will be necessary to do so. It has been a privilege to serve alongside her as her Chancellor.

CNN analyst Luke McGee in a commentary said, Theresa May was a disaster as Prime Minister.

He wrote, “Brexit has destroyed another British Prime Minister.

“It always seems to end like this for leaders of May’s Conservative Party, divided for years over Britain’s relationship with the European Union. Her predecessor, David Cameron, quit the morning after 52% of the UK voted to leave the EU, having presided over his own political miscalculation.

“Under her leadership, the Conservative Party has gone from being seen as the natural party of government to the exploding clown car of politics. Worse than being unable to govern, the Conservative’s mishandling of Brexit has led to the public humiliation of the UK’s oldest and most successful political organization, suffering electoral losses to a rival party that didn’t exist six weeks ago.

“May had previously said that she would stand down if her deal was approved, letting someone else take control of the next stage of Brexit. It turns out that top-to-bottom rejection of her deal and her leadership from pretty much everyone involved in politics would also do the trick.

“May’s legacy will be defined by failures, public humiliations and catastrophic political miscalculations. Some of these were out of her hands. Some were the result of poor advice from those she chose to surround herself with. Some were because of the unprecedented political crisis that would come to dominate her time in Downing Street.

“But much of it was her own fault. Many of her decisions had a directly negative impact on her ability to lead. The problem for May wasn’t just that British politics has been deadlocked for the best part of three years, but that she repeatedly engineered ways to erode her own authority.

“By the time she accepted her number was up, she had lost the confidence of MPs, members of her own party and even her own Cabinet”.

Before taking the job, May had long been tipped for high office. In 2002, while serving as chair of the Conservative Party, May addressed the faithful at their annual party conference. At the time, the Conservatives had been out of power for five years. Tony Blair had successfully won over some traditional conservative voters and the party had an image problem. This also meant it had an electoral problem: “Our base is too narrow and so, occasionally, are our sympathies. You know what some people call us — the nasty party,” May said.

The speech went down a storm and paved the way for a new era. In 2005, the party would elect David Cameron as leader. Cameron knew the importance of May’s support, so made her a close ally and, along with other Tory moderates, oversaw a sweeping modernization of the party. It would come to be a party that believed in helping communities, the “Big Society”, and would eventually be the party that legalized same-sex marriage in the UK.

Cameron became Prime Minister in 2010, albeit as leader of a coalition government with the center-left Liberal Democrats. Again, knowing May’s importance and her appeal to the more conservative members of the party’s base, he made her Home Secretary.

May was always considered one of the toughest members of Cameron’s Cabinet. As Home Secretary, she accused the Police Federation — the association that represents rank-and-file police officers in the UK — of “crying wolf” over budget cuts. She presided over a policy of creating a “hostile environment” for illegal immigrants. She even took on the EU on matters ranging from immigration to the deportation of high-profile terrorists. She was a force to be reckoned with and seen as one of the cornerstones of conservatism in a coalition compromised by liberals.