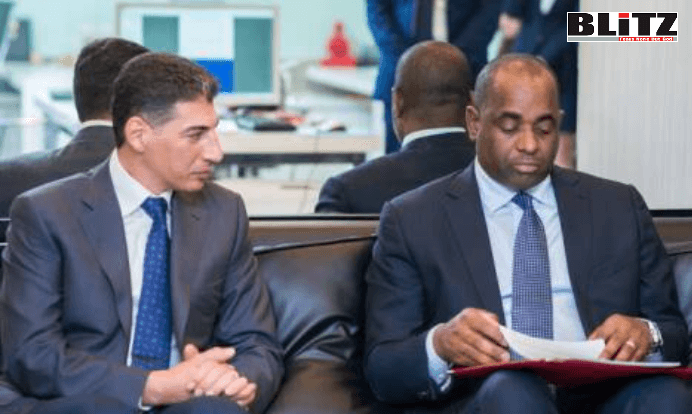 The dubious citizenship scam of Dominica and Caribbean nations PART-6

Dominica’s Prime Minister Roosevelt Skerrit denies his country is not involved in selling diplomatic passports to foreigners. But this is a blatant lie! Back in 2015, Skerrit sold Dominica’s diplomatic passport to an Iranian national named Ali Reza Monfared. According to reports, Dominica’s Prime Minister had received hundreds of thousands of dollars from Monfared in exchange for granting him a diplomatic position, which would for sure, help the Iranian national in enjoying immunity under the Vienna Convention. But things went wrong for Monfared when his Indian partner had disclosed the secrets about his holding of Dominica’s diplomatic passport with the position of ambassador at large, and finally, the Iranian regime had sent their armed members to forcefully abduct Monfared from a hotel in Dominica and return him to Iran, where he currently is serving rigorous imprisonment for multi-billion-dollar fraud.

In 2012, Monfared arrived on Labuan, a small Malaysian island off the coast of Borneo, as a charismatic outsider with big ambitions.  Manoj Bhullar, the owner of a marine logistics company in Labuan, Malaysia, and partner of Monfared describes him stating “You would practically fall in love with him because he is such a sweet talker. Ali can convince anybody into doing anything”. According to Al Jazeera, Manoj refers to Monfared as “Ali” because they were once best friends.

When they met in 2012, Monfared claimed to be an agent of the Iranian government, working, under the direction of Babak Zanjani, to move oil from Iran. Monfared was willing to deal with Iranian petroleum oil dodging the sanctions. It was Bhullar who offered Monfared a solution. He had learned of a small loophole, or at least an untested area, in the law: If oil was stored offshore for a certain period of time, it ceased to be oil from the country of origin and became “Malaysian” oil. And there were no sanctions on that.

Millions of tons of petroleum had arrived from Iran and later sold to a third country via Malaysia under the active participation of Bhullar. Bhullar did the marine logistics and Monfared handled the money.

By the summer of 2014, Monfared had temporarily relocated to Spain. Still, the Bhullars remained close to him and, in August, the two families holidayed together in Panama. It was during that holiday that Monfared proposed that he and Bhullar take a quick side trip to the Commonwealth of Dominica. Explaining this trip, Bhullar told Al Jazeera, “Just before landing at the airport, while we were still in the air, that’s when Ali told me the reason. He has applied under a program to get him and his whole family citizenship.”

Dominica is an island in the Lesser Antilles – a vertical strip of eastern Caribbean islands that cascades towards South America. It is volcanic and wild, with steep peaks jutting dramatically out of the sea. But lacking the picture-perfect beaches of its neighbors, it struggles to attract tourists and is one of the poorest countries in the region. It is also one of those least touched by development.

It can take roughly 90 minutes to reach the country’s capital, Roseau, from the airport. Winding through the narrow mountain roads, Bhullar said he was impressed by the tropical air and lush scenery. It reminded him of home. But, while he was still in holiday mode, Monfared was all business, preparing for a meeting the following morning with the head of the country’s Citizenship by Investment (CBI) unit.

Monfared’s goal was to secure citizenship for his family. It is perfectly legal and very common, usually costing between $200,000 and $300,000. The money either goes to private projects, like hotels, or to infrastructure. It can be a huge source of revenue for small Caribbean islands.

The next day, Manoj Bhullar, along with Ali Reza Monfared met Dominica’s Prime Minister Roosevelt Skerrit towards the end of the meeting, Bhullar received his second shock of the day. Bhullar said Skerrit made an offer, not to Monfared, but to him.

“He said ‘Why don’t you be our ambassador at large?’”

“I said ‘No, I’m a businessman, not a politician,’” Bhullar explained.

According to Bhullar, the following morning, he and Monfared had breakfast with the head of the CBI unit, Emmanuel Nanthan. Bhullar recommended Monfared for the ambassador post and Nanthan seemed satisfied with that, as long as it brought much-needed investment to the island. The final decision on such matters is up to the prime minister, however.

Things moved quickly after that. Monfared had his meetings in Dominica on August 26, 2014. A week later, he had registered three companies there.

On September 3, his family received its naturalization paperwork and he became a citizen of the Commonwealth of Dominica.

In March 2015, Roosevelt Skerrit visited Malaysia as a guest of Monfared and received grand hospitality with Rolls Royce receiving him from the airport, a posh presidential suite in the hotel, drinks and girls. On the same day, Monfared hosted a dinner in the honor of the Dominica Prime Minister – featured champagne, catered food and a jazz band and girls from former Soviet Republics. It was there, Roosevelt Skerrit handed Monfared his diplomatic passport.

This is not the only case of Dominica selling diplomatic passports to foreigners. Roosevelt Skerrit had also sold diplomatic passports to a number of foreigners, including Deziani Alison-Madueke, former Minister of Petroleum Resources of Nigeria. In 2015, just as she was being investigated for multi-million-dollar fraud in Nigeria, Dominica’s Prime Minister personally handed her a Dominican diplomatic passport which potentially gave her immunity from arrest. In exchange, Roosevelt Skerrit received a substantial amount of cash alongside a $2.2 million luxury apartment in New York. This apartment was hurriedly purchased by a shoddy company registered in the Delaware state in the US.

The case of Deziani Alison-Madueke

On May 23, 2015, while still in her position as Nigeria’s petroleum minister, Deziamoi Alison-Madueke met Dominica’s Prime Minister Roosevelt Skerrit in London. Skerrit came to the London meeting with two things—a Dominican diplomatic passport for Alison-Madueke and an appointment letter for the Nigerian minister as Trade and Investment Commissioner for the Commonwealth of Dominica.

Four days after the meeting between Mrs Alison-Madueke and Dominica’s prime minister, a company called Poros Holdings LLC was formed in Delaware, on May 27, 2015.

Though the Nigerian constitution does not bar citizens from taking another nationality, or for those with dual citizenship to hold public offices, a legal practitioner, Dija Hashim, said the propriety of taking such citizenship while still in office is in question. Curiously, the company paid for the apartment in upscale Long Island without recourse to any mortgage. Evidence shows that the Dominica prime minister’s wife had it registered.

Roosevelt Skerrit is known for cozying up with controversial persons around the world and is fingered in a money-for-diplomatic passport racket by an Al Jazeera investigation. In the filmed investigation, Al Jazeera Unit got evidence of the country’s trading off its diplomatic positions to persons who can pay their way.

The case echoes the scandal of Eric Resteiner, an American conman, who claimed he handed half a million dollars in cash to Grenada’s Prime Minister, Keith Mitchell as part payment for being appointed an Ambassador at Large.  That’s an allegation Mitchell denies, although he admits receiving thousands of dollars from Resteiner for expenses.

Al Jazeera also investigates how dozens of wealthy international businessmen have been made ambassadors by several Caribbean states to represent them in countries around the world and at the United Nations.

While there is no evidence of wrongdoing on their part or payment for their positions, many of their ambassadorships don’t conform to the UN’s own convention on who should be a diplomat.  The 1961 Vienna Convention says ambassadors should normally be citizens of the country and not engaged in professional activity, beyond their full-time diplomatic role in the countries they’re appointed to.