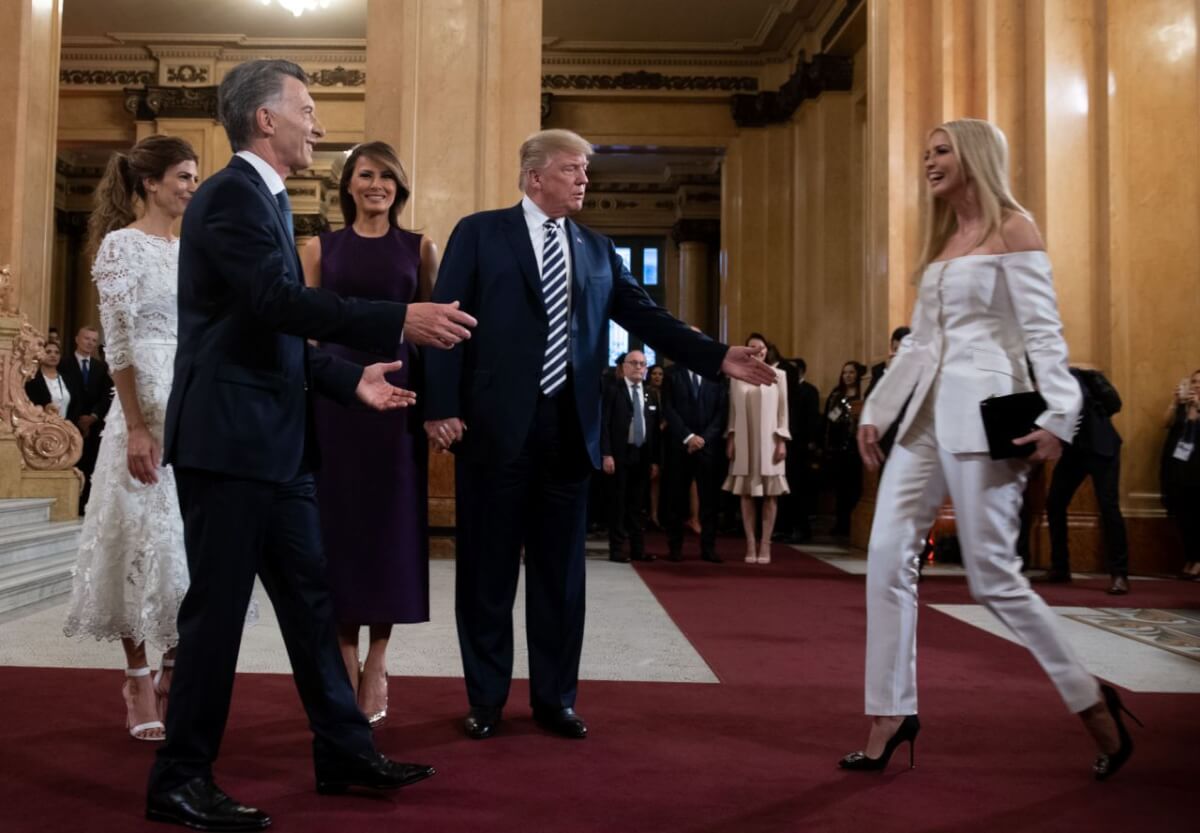 At the Colon Theater in Buenos Aires, Ivanka Trump and her husband Jared Kushner joined President Donald Trump and Melania Trump, along with Argentina’s first couple President Mauricio Macri and Juliana Awada after the first day of the G20 Summit.

But anti-Trump media such as CNN had no hesitation in criticizing Ivanka Trump as CNN White House reporter Kate Bennett tweeted “Her 2017 collection was actually inspired by female Democrat Senators, including Kamala Harris and Senator Tammy Duckworth.”

There is no doubt about CNN gone sane long back, but it is ridiculous seeing Kate Bennett comparing the stylish and famous Ivanka Trump with Kamala Harris. Any idiot may buy these CNN stuff but not the smart and intelligent people. If Kamala Harris can be a fashion icon, then of course, fashion itself has gone rogue. Or if Kamala, after getting into sense about her madness of becoming the next president of the United States of America is really trying to pursue the career of a fashion diva, she first needs to buy a new mirror for her bedroom.

We know CNN and those senseless Democrats are mad at President Donald Trump’s immigration policy, where he is not willing to allow those illegal immigrants land into the United States and steal job and fortune from the American people. But, Democrats need as many as possible illegal immigrants so that they can give birth to more Ilhan Omars or Rashida Tlaibs.

Let me remind my readers something they may have long forgotten. When CNN was launched, people use to call it “Chicken Noodle Network”, and now, after many years, this news network is proving time and again, it actually is Crook News Network.

Let us make a point loud and clear – we aren’t a newspaper supporting socialists or Islamists. We are pro Republican newspaper, and of course, we are in favour of President Donald Trump and members of his administration. We are very proud of the US President Trump and his key advisers – Ivanka Trump and Jared Kushner.

Ivanka Trump dazzled in an all white ensemble while with Vice President Mike Pence and other White House officials in Mexico for the inauguration of President elect Andrés Manuel López Obrador.

The First Daughter beamed in a white jumpsuit as she and the other delegates arrived at the ceremonies held in Mexico City.

Today I will be accompanying @VP Pence, @SecondLady and members of the Presidential Delegation for the inauguration of President @lopezobrador_,’ she said in a tweet on Saturday.

‘Congratulations to the people of Mexico. It is an honor to join you in celebrating this historic day.’

Ivanka accessorized her look with a intricate turquoise broach.

The First Daughter and assistant to President Donald Trump smiled brightly as she greeted various dignitaries who were there to honor the new Mexican president.

Obrador reached out to the U.S. and Canada in his inaugural speech to Congress.

Ivanka and Pence were the first foreign dignitaries he greeted from the podium Saturday.

He also said that since the day he was elected ‘I have received respectful treatment from President Donald Trump.’