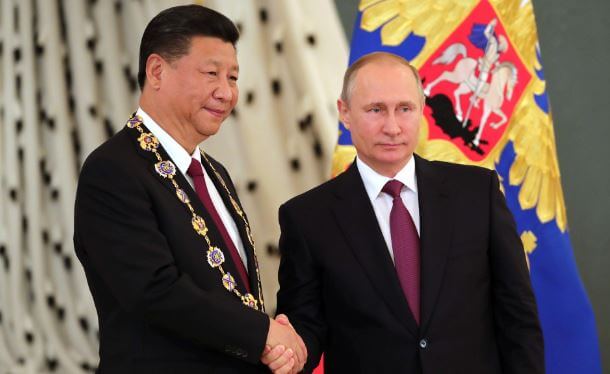 Odds are that China and Russia will prove to be long-term US rivals. However, it may just as well be that their alliance will prove to be more tactical than strategic, with the China-Russia relationship resembling US-Chinese ties: cooperation in an environment of divergence rather than convergence.

Addressing last year’s Shangri-La Dialogue in Singapore, then US defense secretary Jim Mattis dismissed fears first voiced in 1997 by Zbigniew Brzezinski, Jimmy Carter’s National Security Advisor, that long-term US interests would be most threatened by a “grand coalition” of China and Russia “united not by ideology but by complementary grievances.”

On the contrary, Mattis suggested. China and Russia have a “natural non-convergence of interests” despite the fact that both countries have defined their relationship as a “comprehensive strategic partnership,” he argued.

“There may be short-term convergence in the event they want to contradict international tribunals or try muscling their way into certain circumstances but my view – I would not be wasting my time going to Beijing…if I really thought that’s the only option between us and China.  What would be the point of it?  I’ve got more important things to do,” Mattis argued.

Mattis’s prediction of a US-China-India entente may seem even further away today than it did in Singapore a year ago, but his doubts about the sustainability of the Chinese-Russian alliance are being echoed by Chinese and Russian analysts and developments on the ground.

Russian scholar Dmitry Zhelobov recently suggested that there was little confidence to cement the Chinese-Russian alliance. Zhelobov warned that China was gradually establishing military bases in Central Asia to ensure that neither Russia nor the US would be able to disrupt Chinese trade with the Middle East and Europe across the Eurasian heartland.

Add to that the fact that Chinese dependence on Russian military technology appears to be diminishing, potentially threatening a key Russian export market.

In 2017, China rolled out its fifth-generation Chengdu J-20 fighter, which is believed to be technologically superior to Russia’s SU-57E.

Russian President Vladimir Putin appeared to signal greater awareness of potentially shifting sands in Central Asia by signing an agreement in March during a visit to Kyrgyzstan to expand by 60 hectares the Kant Air Base 20 kilometers east of the capital Bishkek that is used by the Russian Air Force. Putin also agreed to pay a higher rent for the base.

He further lavished his Kyrgyz hosts with US$6 billion in deals ranging from power, mineral resources, and hydrocarbons to industry and agriculture.

Putin moreover allocated US$200 million for the upgrading of customs infrastructure and border equipment to put an end to the back-up of dozens of trucks on the Kazakh-Kyrgyz border caused by Kyrgyzstan’s inability to comply with the technical requirements of the Russia-led Eurasian Economic Union (EAEU).

Potential rivalry in Central Asia is not the only thing gnawing at the fundaments of a Chinese-Russian alliance. So is anti-Chinese sentiment and Russian public suspicion of Chinese intentions and commercial and social practices, already pervasive in the region’s former Soviet republics.

Increasingly, Russian leaders are facing mounting public anger in the Lake Baikal region and the country’s Far East at their alleged connivance in perceived Chinese encroachment on the region’s natural resources, including water.

A petition by prominent Russian show business personalities opposing Chinese plans to build a water bottling plant on the shores of Lake Baikal attracted more than 800,000 signatures, signaling the depth of popular resentment and pitfalls of the Russian alliance with China.

Protests have further erupted in multiple Russian cities against Chinese logging in the country’s Far East that residents and environmentalists charge has spoiled Russian watersheds and is destroying the habitats of the endangered Siberian tiger and Amur leopard. The protesters, who denounced construction of housing for Chinese workers, are demanding a ban on Russian timber exports to China.

Russian fears of Chinese encroachment on its Far East go back to the mid-1800s and prompted Joseph Stalin to deport the region’s Korean and Chinese populations. When Russia and China finally settled a border dispute in 2008 with a transfer of land to China, Russian media raised the specter of millions of Chinese migrants colonizing Siberia and the Far East.

Popular Russian fears diverge from official thinking that in recent years has discounted the threat of Chinese encroachment given that the trend is for Russians to seek opportunity in China, where wages are high, rather than the other way round.

The official Russian assessment would counter Mattis’s thesis and support Brzezinski’s fears, which continue to have a significant following in Washington.

“China and Russia will present a wide variety of economic, political, counterintelligence, military, and diplomatic challenges to the United States and its allies. We anticipate that they will collaborate to counter US objectives, taking advantage of rising doubts in some places about the liberal democratic model,” said Director of National Intelligence Daniel R. Coats in the intelligence community’s 2019 Worldwide Threat Assessment report to the Senate Select Committee on Intelligence.

The report went on to say that China and Russia were “expanding cooperation with each other and through international bodies to shape global rules and standards to their benefit and present a counterweight to the United States and other Western countries.”

The truth is that the jury is out. There is no shortage of evidence that China and Russia are joining forces in multiple theatres across the globe as well as in multilateral organizations like the UN and in Russian and Chinese efforts to drive wedges among Western allies and undermine public confidence in democratic institutions.

The question is how disruptive Chinese-Russian rivalry in Central Asia and mounting Russian public unease with Chinese advances will be and whether that could alter US perceptions of Russia as an enemy rather than an ally.

The odds may well be that China and Russia will prove to be long-term US rivals. However, it may just as well be that their alliance will prove to be more tactical than strategic, with the China-Russia relationship resembling US-Chinese ties: cooperation in an environment of divergence rather than convergence.

Said strategist Robert D. Kaplan: The “future has arrived, and it is nothing less than a new cold war.”