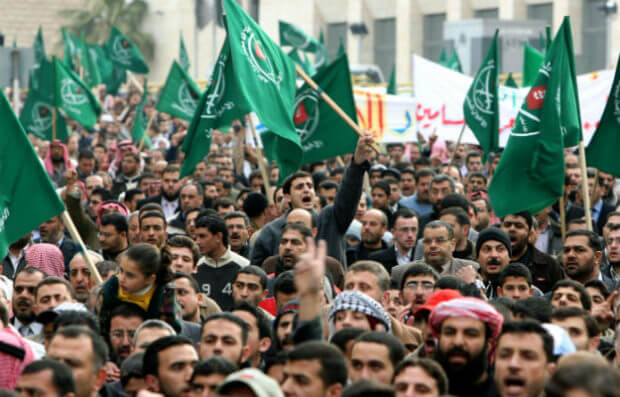 It has happened from time to time that a group of Muslims burns a wooden crucifix outside the US Embassy as a response to rumors that a group of Western people offended the feelings of Muslims by some statement. During these demonstrations, Western flags get burned. It is surprising that these events get no coverage in the mainstream media. These events happen usually in a Muslim majority country, such as Egypt or Pakistan, when any rumor of insulting Islam provokes reactions against the Christian people there. But now, in recent decades, Europe is going through various social changes, through continuous penetration of Muslim immigrants and their involvement in politics, economy, law, education and the media. Muslims have tried and are still trying to change the orientation of Europe to Islam, to make Europe accept that Islam is one of its influential religions, and as one of the major religions in the continent with political and ideological influence. They are also working through their penetration into European civil and social institutions.

Let’s talk about the Islamic plan to invade Europe.

In 1980, the Islamic Council of Europe published a book on Muslim societies in non-Muslim countries, which illustrated the Islamic plan for Europe. When Muslims live as a minority, they face many problems, especially regarding implementing the sharia law, since Islam teaches that Islam must dominate over any society. Therefore, Muslim scholars advise Muslims to form societies with religious centers, and avoid assimilating into European societies. The book says that this must be a duty for every Muslim believer, all for the primary purpose of the transformation of Muslims from minority to a majority status in these societies, so that then Islamic law can be implemented. The only disagreement is over how to implement this scheme: by slow transformation or fast transformation, or even by the use of violence.

Today’s observer of the situation in Europe can see the actual implementation of this scheme. Muslims are located in communities similar to ghettos, and refuse to mix with the larger community, while Saudi and Qatari money flows in for the establishment of luxury mosques and the staffing of them with Islamic preachers. For example, in Malmö, Sweden’s third-largest city, there are armed Islamic gangs, and many of the city’s Muslims do not know how to speak Swedish, despite having been in the country for more than 20 years.

In Britain, the Muslims are located in three regions: Northwest, Central and East London (now often referred to as Londonistan). Some jihadists consider the city of London to be the base for their jihadist activities. In some areas of London, they target non-Muslim communities. In order to implement sharia law step by step, now halal meat is being used inside Britain as prison food and food for hospitals and schools. The Islamic hijab is permitted in British schools. Some Muslims in the Tower Hamlets in London have succeeded in changing some street names to suit the Islamic taste. Unfortunately, Islam’s epidemic is spreading in Britain, where Islamic law is applied in secret to Muslims by sharia courts, and Islam has a strong presence in education.

In universities, Saudi money plays a role feeding radicalization in the West, particularly the US and UK.

The Muslims of Spain are trying to recover the mosque of Cordoba, which was a church, then was converted to a mosque during the Islamic occupation of Andalusia, and reconverted to a church after the departure of the Muslims.

There have been cases of conversion to Islam in European countries. but the influence of the Islamic terrorist ideology has begun to influence their mental health. Many Muslim converts from Europe went to Syria and joined ISIS to fight for the Islamic caliphate. A Bulgarian girl blew herself up in Baghdad after being converted to Islam by her faithful husband.

Some Muslim migrants showed themselves to be a ticking bomb in Paris is November 2015.

As all this is happening, European people have turned into dhimmis.

A Dutch imam stressed that Islamic law is superior to all other laws, but that these laws do not obligate any Muslim to submit to them. On the other hand, an imam in Finland confirmed the legitimacy of killing apostates, adding that although it is impossible to apply this at the present time, it can be done when the Islamic state is established in Finland.

Islamic terrorists use democracy and European civil rights very well to further advance the Islamization process. It is strange that all the rights they enjoy in Europe do not prevent Muslims from permanently complaining that they are the victims of racial discrimination in Europe.

Why do I care, as a Jordanian Christian from the Middle East?

The real question is this: what do the Europeans and the Americans have to do with me ? May I say it’s their problem?

The fact is that most of the Christians and other minorities in the Middle East live in the Islamic hell, and some of us are fleeing to a region of free space and human rights in Western societies. If we lose this bastion of civilization and freedom, then where we will go?

I know that the danger is still limited. And awareness is spreading in European and American societies about the danger of the Islamic ideology. Perhaps the 9/11 attack was the beginning of discovery, the beginning of awareness, but still many Europeans and Americans need help to move away from their fatal indifference towards Islamist thought on the pretext of human rights and freedom of expression. It is not right to make the same mistake twice in history, once in the East and once in the West.

My role is to carry the burden of raising awareness within these indifferent societies, particularly among the youth, and exhorting people to take more responsibility and participate in all civic organizations in Europe and America. Christians of the Middle East also bear the responsibility of participation in political parties in Western countries. We are in the position of having escaped from Islam only to confront it in our new home. Instead of just leaving the land of Islam to come to the land of freedom, we must save this land of freedom from being trampled underfoot by those we left the Middle East to escape.

The Christians of the Middle East are the strongest line of defense against the Islamic infiltration of Western civilization. We have tasted Islamic rule and its alleged justice. We know what it means to lose your country. And to fill your history with pages where there is no place for words, but only blood. We know the source of the pain in the Middle East, where Satan lives, where darkness reigns, and despair, poverty, disease and slavery prevail.

We, the Christians of the East, know the existence of hell where there is Islam. And we have to instruct the world on how to prevent the rivers of blood and hell from infiltrating into the strongholds of freedom.

Rami Dabbas is a Jordanian academic and activist.