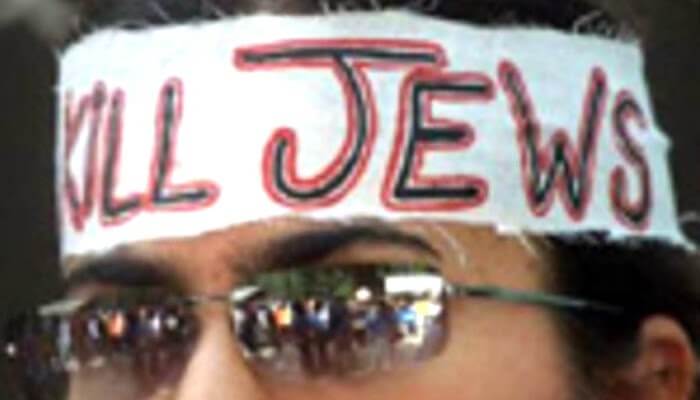 The Pagan prophet, Bilaam, whose curse upon the people of Israel was Divinely transformed into a blessing, understood what the secular Zionists at the turn of the 20th century did not. Secular Zionists, driven by a vision of becoming a nation like all others, believed that global Jew-hatred would end once we, the Jewish people, returned to our ancestral lands and reestablished our state.

We can never be like any other nation. Other nations can be multi-religious. Other religions can be multi-national. Whereas we are the only nation that is defined by our religion. Our nationhood was consecrated at Mount Sinai, upon receiving the Torah. For the Jewish people there is no separation between nation and faith. We cannot be one without the other. Nor can we fully observe the Torah without our land. The Jewish nation, the Torah, the land of Israel are all forever intertwined.

And since we can never be like other nations, Jew-hatred will never cease to exist. There may be phases of varying severity, but it will never disappear. It’s always there. If not blatant, just beneath a very thinly veiled surface.

Today, however, it is indeed blatant throughout Europe and the United States – from leftist government officials to academia, from college campuses to the UN, the masks are off. With this hatred, they effortlessly unite with the racist extremists on the right and the maniacal Jihadists. They share the same “cause”. Kill the Jew. Exterminate the Jew. Incinerate the Jew. Destroy Israel. From the river to the sea.

The most overwhelming voice of Jew-hatred stems from the Muslim world. They expertly utilize their ever-willing collaborators among the Europeans, experts themselves in Jew-hatred, and eager to fund the Palestinian Authority under the guise of humanitarianism. They know well that the money they send goes directly to the PA’s initiative to kill Jews and its endeavor to destroy Israel.

As in the past 1900 years, the world is consumed with Jew-hatred, incapable of progressing without its proverbial scapegoat. Although this psychotic hatred is in effect debilitating to themselves and to their people, imperiling their own advancement, they choose to cling to it, to feed it, and to wade in the manure of their loathsome beings.

While no Jew is safe from this hatred in the Diaspora, reestablishing our state in our ancestral land of Israel has inspired our haters to focus their immediate attention on the tiny enclave in the Middle East we call home. While the area of Israel is slightly over 20,000 square kilometers, the area of the Arab world measures at 11,352,502 square kilometers. Israel’s area is about 0.18% that of the Arab countries. But even that, is too much of a thorn to “the others”. There is no place on this earth small enough for the Jewish nation to be able to live in peace. Hence, blood libels against us surge, false narratives created by the Arab Muslims are voraciously devoured, our identity, our history erased by world bodies, and the International Court is steadfastly at the ready to take our people to task for having the temerity to defend our lives. In our world, we are denied the rights of “the others”.

The story is old but, alas, never wears thin. The pages are yellowed with age and rumpled with overuse, yet remains a favorite pursuit among our detractors.

The Jewish nation will always be alone. Assimilation, capitulation, bending over backwards to please “the others” has never improved our lot. Yet, today, after nearly 2000 years of persecution, we are witness to too many among us who try the same old useless approach, desperate to find favor in the eyes of “the others.”

This is not a whine or an exercise in bemoaning our plight. I am just stating the facts. Jew-hatred will never end. With few exceptions, it is in the DNA of the nations of the world.

Is there hope? No. Why would anyone believe that there is?

The only recourse left to the Jewish nation is to remain strong. Not only in military strength, but in the strength of our convictions. To be proud of who we are, and what we stand for. To embrace our heritage and appreciate that our indigenous roots are in our God-given land of Israel. To recognize the miracle of reestablishing the Jewish State of Israel after 1900 years of persecution, united in our Zionism, our heritage, our Torah and our peoplehood.

History has taught us well that we cannot rely on “the others” for our security. To those among us who chirp incessantly how it is far more dangerous in Israel, I say, if need be, I’d rather die as a proud Jew in my own land, the land of my forefathers, where I don’t have to hide my Jewishness and where our people’s defense is in Jewish hands, than die in the Jew-hating cesspool of the diaspora.

Our adversaries will make us bleed. They will use every means to rob us of our heritage. They will plot, conspire and employ all methods to destroy us. They will break us. Temporarily. For the outcome will always be the same until the end of days as we know it – We will rise up again. We will persevere. We will flourish. They simply can’t destroy us. It’s not in God’s plan.

You would think that the Jew-hating hordes of miscreants would finally get a clue. They don’t. They won’t.

We therefore must keep our eye on the ball. Ridding the world of Jew-hatred is not a realistic goal. Thriving in our God-given land is.

It is our destiny to dwell alone, and that’s okay. Because we are not like “the others”. That is a reality of our existence, one we must accept and not fight. But fight back against the Jew-haters, absolutely. With every last breath of our being.