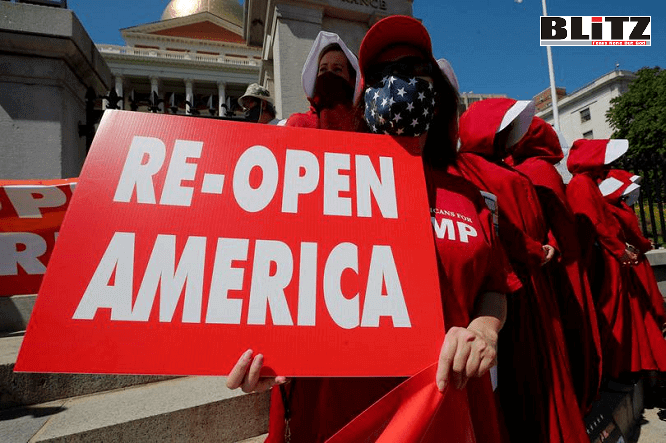 The Western world is experiencing two major turning points at the same time. One is the COVID-19 pandemic and the other is the global mass movement against racism. The latter, an important and justifiable drive, should be differentiated from the Black Live Matters movement, which is revolutionary Marxist, extreme left, anti-white, anti-capitalist, antisemitic, and itself racist. These two unprecedented forces have their own trajectories, but together they are challenging liberal democracy.

The Western world is experiencing two major turning points. One is the COVID-19 or coronavirus pandemic, the reactions to it, and its aftermath. The other is the global movement against racism, which started in the US at the end of May and has since taken root in several other Western countries. It is highly unusual for two such unprecedented and powerful forces to strike a civilization simultaneously. Each of these forces has its own trajectory, but their combined impact is posing a serious challenge to liberal democracy.

Some historical turning points had an immediate effect on Western societies, while others exerted a more gradual influence. The US Marshall Plan of 1948 greatly helped to finance the reconstruction of Western Europe. In 1952, six European countries came together to integrate Western Europe’s coal and steel industries in the form of the European Coal and Steel Community. This combined effort symbolized the European countries’ collective desire to collaborate and stop going to war with one another. It eventually led to the European Union, which—after Brexit—now includes 27 countries.

The last leader of the Soviet Union, Mikhail Gorbachev, declared a new era of “glasnost” and” “perestroika,” ideas that were intended to make the Soviet economy more efficient. They turned out to be the beginning of the end of the Cold War, the cutting loose of Soviet satellites, and the disbanding of the Soviet Union, which was symbolized by the fall of the Berlin Wall and the reunification of Germany.

One event that is less often acknowledged as a major historical turning point was the May 1968 student revolt in France. That event ultimately led to the undermining of the authority of the state, the church, universities, teachers, and parents. A further key turning point was the invention of the birth-control pill, which led to the sexual revolution.

Yet another turning point was 9/11. There had been terror attacks in Western countries before, including major jihadi attacks on US targets. The 1998 bombings of the US embassies in Kenya and Tanzania killed many people, as did the attack on the US warship Cole in 2000. But 9/11, combined with severe jihadi attacks in Madrid, London, Paris, Nice, and Brussels, was the event that finally made Western societies take Muslim terror seriously.

Two current events are having a great impact on democracy, each in its own way. The coronavirus pandemic has significantly infringed civil rights. The lockdowns, the mandatory wearing of face masks, and social distancing requirements all contradict premises that were recently accepted as essential to democracy. The same is true of the limits placed on the freedom to gather in houses of worship.

At first, Western populations largely accepted these restrictions out of fear of the virus. As time passed and the numbers of deaths declined, opposition to these measures increased, albeit in different ways in different countries. This development was influenced by the fact that doubts have emerged about the efficacy of some of the measures taken by governments.

All this tension inhibits the functioning of liberal democracy, and the need for greater government intervention to revive the economy will only worsen that trend. While several ideologues and ideological movements are trying to challenge the way the economic rebuilding of democratic societies will be conducted, the bulk of mainstream Western society is convinced that the pre-pandemic capitalist economy has to be rebuilt in order to limit unemployment as much as possible.

Economic forecasts are dire. The EU’s economy is expected to contract by 8.3% in 2020 and growth for 2021 is forecast at 5.8%. This means that at the beginning of 2022, the economy will still be significantly below that of 2019. Contrary to hopes, there will not be a V-shaped recovery (i.e., a rapid economic decline during the pandemic and an equally rapid rebound).

The anti-racism movement also challenges democracy—primarily in the US, but elsewhere as well. In several American cities, peaceful demonstrations were accompanied by looting. In some locations, the police were overwhelmed. In a few urban areas, the police were put in the position of not having the support of the authorities. This was the case in Los Angeles, for instance. Instead of coming out against the violence, Mayor Eric Garcetti, a Democrat, quickly pushed through a reduction of the police budget by $150 million.

A further current of illegality was the attacks on statues of historical figures associated to some degree with slavery. This occurred in Richmond, VA and Durham, NC, as well as other American cities. A statue of Christopher Columbus was thrown into Baltimore harbor. The targets of the vandalism quickly ceased to make any sense, with statues of abolitionists being inexplicably defaced and damaged along with all the others. UK protesters in the city of Bristol, meanwhile, threw a statue of Edward Colston, the city’s prime benefactor and also a slave owner, into the harbor. In a democratic system one can propose that a statue be taken down. Doing so violently challenges legality.

There is a huge structural problem with the anti-racism movement. Racism is, to different degrees, an integral part of Western societies, and there is broad consensus that it should be fought. In the forefront of this battle, however, is the Black Lives Matter (BLM) movement. BLM is a revolutionary Marxist, extreme left, anti-white, anti-capitalist, and antisemitic organization, and it is also unapologetically racist. None of this seems to be acknowledged by the public at large. (Nor does BLM appear to have the slightest interest in the existence of slavery in countries such as Mauritania and Sudan.)

Even the Pew Research Center has fostered this confusion. In one of its polls, it did not differentiate between the anti-racism movement and BLM, an extremist organization. The poll found that as many as 67% of American adults support or somewhat support BLM, but in the absence of that distinction, the result misrepresents the respondents’ views.

Confusion over the difference between fighting racism and supporting the full agenda of BLM has resulted in a reluctance among both individuals and organizations to distance themselves from the radical BLM movement. The foundations and organizations that are financing BLM will, however, have to be held accountable eventually. The same goes for New York City’s Democratic mayor Bill de Blasio, who participated on July 9 in painting the words “Black Lives Matter” on the street in front of Trump Tower in Manhattan. He did this together with Reverend Al Sharpton, a black activist and antisemite.

A key goal of BLM is to defund the police. Reviewing police methods is a legitimate democratic aim, but removing the police from society entirely is a revolutionary goal (and, indeed, one that would directly harm the black community). The notion that money saved by defunding the police would be spent on community work will not prevent unrest and chaos. Minorities will become even more vulnerable. Self-defense organizations will spring up, both legal and illegal. Members of the American silent majority are already taking steps to strengthen their ability to defend themselves through gun purchases, which soared in June.

The gap between what the BLM movement demands and what the black community wants and needs is illustrated by an incident that took place in New York. In mid-June, the New York Police Department (NYPD) abandoned its plainclothes and anti-crime units. Less than a month later, after a one-year old child was killed in the crossfire of a shooting incident, members of the black community called on the NYPD to bring back the disbanded anti-crime units to help get guns off the street.

The pandemic and its aftermath have led to a weakening of liberal democracy, but the unrest does not coalesce around a specific movement. BLM, by contrast, opposes democracy. In an already polarized US, a radical leftist anti-democratic movement is likely to prompt an extreme right-wing reaction. Nor will the silent majority remain neutral toward BLM extremism.

In the last century, Europe saw the extreme criminal consequences of both a right-wing and a left-wing dictatorship. The US is still far from that point, but it has moved a step closer. Before the antiracism outburst, France seemed the closest to chaos of all the Western countries. There is a substantial radical Muslim presence in France, and the government and police have lost all control over many heavily populated Muslim neighborhoods. The US may be on the road to overtaking French levels of chaos.

Both the pandemic and the anti-racism movement are threatening liberal democracy. To prevent chaos and eventual dictatorship, a more law-and-order-focused democracy might be the best solution. This can only be achieved, however, by a change in the mindset of large segments of Western populations.

Dr. Manfred Gerstenfeld­­­­­­­­­­­­­­­­­­­­, a regular contributor to Blitz is a Senior Research Associate at the BESA Center, a former chairman of the Steering Committee of the Jerusalem Center for Public Affairs, and author of The War of a Million Cuts. Among the honors he has received was the 2019 International Lion of Judah Award of the Canadian Institute for Jewish Research paying tribute to him as the leading international authority on contemporary antisemitism.