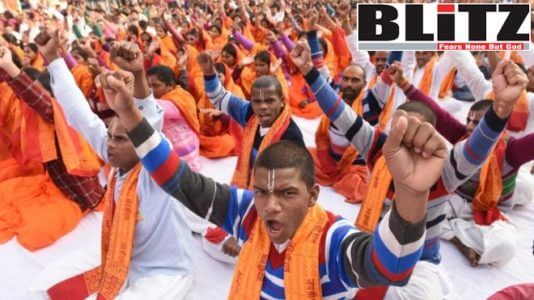 At the time of writing this article (August 15th 21.00 hours London time) I am listening to LBC Radio UK and hearing accounts from people who were caught up and injured in the India Pakistan, Kashmir related organized riots.  At 22.00 hundred hours on the BBC TV News there is a news item on the Kashmir crisis and British riots which is virtually the last topic on the news. The British inter-ethnic riots are glossed over in less than twenty seconds before a rather unintelligent broadcast is shown from a BBC correspondent who is clearly lacking in knowledge on the subject. reporting on what has been violent and uncivilized demonstrations involving the two largest ethnic groups within the United Kingdom.

On waking up the next morning, I immediately switch on to the UK BBC TV news and the subject is not reported nor does it appear anywhere on the BBC news text pages. This is the white British media’s response to major riots within England. The pseudo-intellectual, middle classes responsible for news output ignore the most important issue currently facing Britain’s two largest ethnic communities. Muslim and Hindu sensitivities are ignored by the BBC News editors. Either censorship and inertia or both are at work. And the Indian and Pakistani communities within the United Kingdom should be outraged.

Several organized anti-Indian protests created havoc and a huge police presence in various major UK cities including London. The thousands of protesters were mainly Pakistani Muslims antagonized by the Indian Governments recent behavior in Kashmir. Indian groups counter protested but were heavily outnumbered as the protesters vented their spleen. Racist abuse in a variety of ethnic dialects were hurled at the Indians but no police action taken. Rest assured if white, working-class British had hurled similar racial abuse at any ethnic group the police would have made dozens of arrests.

There is a double standard it seems in the United Kingdom. If you are from a certain religious ethnic group and part of an organized riot spewing racial hatred at members of another nonwhite ethnic group, the law governing racial hatred can be broken with immunity. Given the current circumstances and the recent deaths of both Indian and Pakistani soldiers and civilians in the disputed territory, it is likely that these skirmishes will continue and the violence will exacerbate. The cities and streets of the United Kingdom will witness severe tensions between its Indian and Pakistani populations. What will the legal reaction be and how will the media continue with its current policy of low-level reporting.

The purpose of this article is not to analyze nor offer an opinion on who is to blame or how to solve the conflict. The objective is to expose how the British media mocks both the Indian Hindu and Pakistani Muslim British communities with their total disregard for an issue which impacts so very much on both communities.  The link below is simply a brief historical analysis.

Given that the Kashmir conflict has resulted in the deaths of three times as many deaths in the same period as for example the Israel Palestinian conflict as calculated by New Fair Reporting the amount of media attention devoted to Kashmir is minimal.

When a Palestinian teenager in a media-hyped event slapped an Israeli soldier the BBC website devoted one hundred days of continued media coverage. Perhaps our fellow British Indian and Pakistani citizens should start complaining en mass to the British media who are clearly mocking their ethnicities by taking such little interest in the Kashmir situation.

According to witnesses who called the London Radio Station LBC, stones, rocks and eggs were pelted at men, women and children and scores were injured. Unbelievably the mainstream TV channels in the United Kingdom’s coverage of this was so little and light to the point of censorship. This is very sinister as those of us who research and are familiar with the incompetence and bias of the UK media, well remember how the UK media failed to report on four genocides in Africa during the period 1970 to 2010 and are still not reporting on, for example, Islamic atrocities committed on indigenous black Africans. Clearly, Black Lives do not matter to the British media. Rest assured had the perpetrators been Israeli, Zionist or white working class from the USA there would have been and would be saturation TV coverage.  Will history be repeated by the BBC and the UK media in failing to report on this incredibly important geopolitical issue impacting on millions of British subjects. And if so, why?

Peter Baum is an analyst, research scholar, writer and Special Contributor of Blitz.