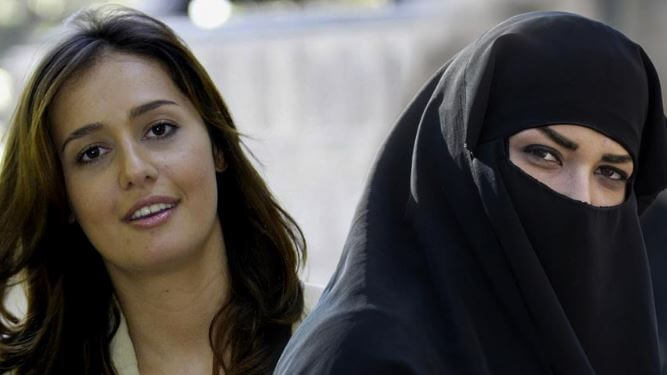 Afghanistan keeps following me right into the West. Headlines abound daily—and there are women shrouded in burqas, hidden by Niqab, and set apart wearing Hijab on the streets of so many American cities.

Minnesotans have just elected the country’s first Muslim, hijab-wearing woman to Congress. Michiganders have just elected another Muslim woman who wore a Palestinian Arab dress known as a thobe as a way to proudly signify her roots. (When a Muslim does it, no question of dual loyalty is ever raised.)

Last night I was in a room where someone was watching the TV show Madam Secretary. I stopped watching this once it became clear how politically correct they are to the point of tedium, and how gracelessly they cannibalize the most recent headlines and give them a more dramatic but hardly accurate spin. I fear this may be how many viewers today get most of their information, but that is another matter.

Tea Leoni’s super-fashionable clothing and how well she wears it is the primary reason to continue watching this program with its mainly likable cast all of whom represent the right skin colors, religions, sexual orientations; alas, they all share only one Obama-like political POV.

Last night, Tea Leoni and Company were again in Afghanistan brokering a deal with a new government which included the Taliban. A young, heavily chaperoned Afghan girl, was on her way back home after having had compassionate heart surgery in America. Some fool on the airplane video-captured her talking and sitting next to the Secretary of State’s right hand man, and sent the video to her own parents who were stationed in Kabul. The video went viral—and the girl’s honor killing was on. The girl rushed to the American Embassy and asked for asylum—and got it.  Providing protection for this one girl who dutifully wore hijab at all times endangered the much larger deal which America had negotiated.

And, like so many girls in her position, she missed her mother and wanted to go home.

Finally, a solution was found. The girl agreed to marry a much older man whose children she would mother. She accepted her fate as “God’s will.” The money for this deal with the Devil was provided by a woman’s NGO based in Afghanistan.

The fictional Afghan girl did not wear a burqa, she wore hijab. I believe that her honor killing male relatives and the Afghan men who tried to storm the gates of the American Embassy expect their women to wear burqas. Perhaps I am wrong.

I have long argued for a ban on the burqa and on niqab, on human rights, women’s rights, and health rights grounds—as well as on security grounds. Until now, I have excluded hijab because a headscarf does not obscure identity and does not prevent its’ wearer from fully interacting with others.

Like the Sikh turban, the Catholic collar, the nun’s habit, the Muslim taqiyah, and the Jewish yarmulke or other Jewish head-coverings,  a head covering does not disguise the wearer but it does signify that the wearer is religious and/or belongs to a specific ethnic group and is thus, “different,” set apart from others.

No one forces a Catholic to become a nun or a priest and no one threatens to murder them if they leave the fold. While there may be group pressure and individual religious choice involved in wearing turbans, yarmulkes, and wigs, no one is forced to do so or threatened with death for refusing to do so.

Finally, Sikhs, Catholics, and Jews are not threatening to blow up civilians in the West. Signifying one’s identification with these religions/cultures does not signify membership in a religion/culture which has historically and is currently threatening to blow up infidels, dissidents, feminists, and homosexuals, both at home and in the West; a religion/culture that is most associated with honor based violence, including the honor killing of girls and women who refuse to conform, both at home and in the West.

Wearing hijab, especially a severe and unfriendly form of hijab, might make a Westerner jumpy. (Unless of course, that Westerner confuses supporting female subordination with opposing white racism.)

While I can find no grounds to argue for a hijab ban, I concede that Abigail Esman’s fine piece: “#NoHijabDay” makes a good argument for at least understanding what hijab represents. She quotes many Muslim women who refused to wear hijab and who faced death threats, rape threats, and the loss of their entire extended family.