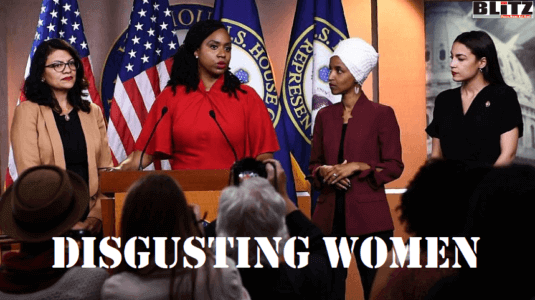 In the showdown between U.S. President Donald Trump and “the Squad” of four far-left minority congresswomen, Jewish organizations in America have overwhelmingly condemned Trump’s remarks.

Trump tweeted that certain “progressive congresswomen,” widely assumed to be Ilhan Omar (D-Minn.), Alexandria Ocasio-Cortez (D-N.Y.), Rashida Tlaib (D-Mich.) and Ayanna Pressley (D-Mass.), should go back to the “totally broken” countries they had come from and sort them out before telling America how to run its own affairs.

Jewish organizations, which are overwhelmingly liberal and anti-Trump, reacted viscerally, accusing the president of “echoing the racist talking points of white nationalists” and of being America’s “Racist in Chief.”

Only the Republican Jewish Coalition demurred, agreeing with Sen. Lindsey Graham that the Squad were “a bunch of Communists” who “hate Israel. They hate our own country.”

The anti-Jewish and anti-Israel prejudices repeatedly expressed by certain members of the Squad have disquieted many American Jews.

Yet the Democratic Party, which still attracts unquestioning support from some three-quarters of Jewish voters, has failed to discipline these women—not just for their Jew-baiting, but also for their deep-dyed anti-Americanism and anti-white racism.

Worse still, the broader party is itself enmeshed with extremism through its attacks on the enforcement of immigration law and its reluctance to condemn the supposedly antifascist but violent and nihilistic Antifa protest group.

Last weekend, Willem Van Spronsen, an Antifa member who was armed with a rifle and home-made bombs, attacked an Immigration and Customs Enforcement (ICE) detention center in Tacoma, Wash. and was shot dead by police officers.

Yet while hysteria erupted against Trump over his tweets, there was minimal coverage of this attack. That was because the Antifa terrorist was a leftist, whose incoherent “manifesto” parroted the Democrat and liberal mantra about the supposed atrocities in these detention centers.

Only a week ago, Omar denounced the border-control agencies and called for “a conversation about eliminating their existence.” And by an amazing coincidence, the terrorist’s “manifesto” called the ICE centers “concentration camps,” the wildly offensive and inappropriate term for them coined by Ocasio-Cortez.

Outrageously, she also complained about American flags flying over ICE centers. Hours later, the “Stars and Stripes” flying over a Colorado ICE facility was torn down and replaced by a Mexican flag.

Yet there was no condemnation from the Democrats of this contempt for the US flag and the country it represents—a silence described by former U.S. Ambassador to the United Nations Nikki Haley as “disgusting.”

Even more troubling is the party’s support for breaking American law.

A number of high-profile Democrats have publicly advised how to avoid arrest by an ICE agent. House Speaker Nancy Pelosi, for example, said during her regular press conference last week that illegal aliens should simply not open the door if an agent came knocking.

The Democrats governing “sanctuary cities” are actually providing sanctuary from the law. They are actively thwarting due process against individuals whose removal has been ordered in court by an immigration judge.

The latest ICE report details how, over the course of two years, the “sanctuary state” of California refused to turn over 5,600 criminal illegal aliens to ICE agents for deportation. Of these, more than 3,400 had been charged with crimes, including homicide, kidnapping, sexual assault, robbery, aggravated assault, drugs and fraud.

Shamefully, American Jews have been in the forefront of campaigning against the enforcement of immigration law.

Over the past week, thousands have taken to the streets of U.S. cities to demonstrate against Trump’s immigration policies. Dozens of synagogues across the country have offered illegal immigrants protection during ICE raids.

For obvious historical reasons, Jews are instinctively sympathetic to immigrants. But all nations are entitled to limit the numbers entering the country. Without border controls, there can be no nation. Since when did Jews believe it right to display such contempt for both the rule of law and the very concept of citizenship?

Now the Democratic Party has displayed further contempt for the rules of Congress. After the majority leader Steny Hoyer ruled that Speaker Pelosi was out of order in referring to Trump’s “racist tweets,” he was promptly overruled by his fellow Democrats. And so the House deemed Trump “racist.”

This will rebound on the Democrats because fair-minded people will see it as false and unconstitutional. Trump’s “go back” tweet was certainly offensive and stupid, since three of the Squad were born in the United States and all are U.S. citizens.

However, he wasn’t attacking their color or ethnicity. He was attacking their disloyalty to America. Racism is picking on people for who they are; Trump attacked the Squad for what they do and say.

The four of them constantly use their ethnic backgrounds to present themselves as different from other Americans. Tlaib literally wrapped herself in the Palestinian flag on the day she was elected to Congress.

They emphasize these differences in order to pose as victims of white America. Far from Trump being racist in differentiating them from other Americans, they themselves weaponize those differences against America and its core values.

Trump’s language was unpleasant and phrased with stupid carelessness. But it’s not racist to tell such people that if they hate America so much they can leave.

The crowd roaring “send her back!” at Trump’s rally this week weren’t racist either. They were roaring support for Trump because they understood that he had finally drawn a line in the sand, albeit rhetorical, against those who want to destroy America, Israel and civilized values, but who are generally indulged.

Most American Jews, though, appear to think that it is indeed racist. Downplaying or ignoring the Jew-baiting now tolerated by the Democratic Party, liberal Jews are so blinded by hatred of Trump that they actually attack him for supporting the Jewish people.

Thus the head of the Anti-Defamation League, Jonathan Greenblatt, objected to Trump’s attacks on the Squad’s Jew-hatred with the Orwellian claim that “politicizing the widespread, bipartisan support for Israel and throwing around accusations of anti-Semitism is damaging to the security of Israel and the Jewish community.”

Hatred of Trump seems to have caused a number of Jews to lose their reason altogether. In The Los Angeles Times this week, Michael Hiltzik wrote: “What’s most striking about current administration practice is how it resembles the pre-Final Solution treatment of Jews in Germany and Nazi-controlled portions of Europe.”

This obscenely false analogy unforgivably trivializes the genocide of the Jews of Europe. Yet one after the other, liberal Jews are abusing the memory of the Holocaust and its victims by claiming that Trump is paving the way for Nazism.

Heaven only knows, Trump has his faults—many of them unattractive, egregious or alarming. But those who so hysterically anathematize him and have falsely made him into a figure of mythic malice, while themselves nodding along to bigotry, violence and seditiousness on their own side, are saying much more about themselves. And none of it is good.

It is the Democrats who are embracing anti-Americanism, anti-white racism, Jew-baiting, witch-hunting and contempt for the rule of law. It is Trump who is standing up for the defense of America and its values, for legality and due process and for the Jewish people.

By displaying Democrat and liberal partisanship that is shallow to such a horrifying degree, American Jews are disgracing their cultural heritage and destroying their own moral standing.

Melanie Phillips, a British journalist, broadcaster and author, writes a weekly column for JNS. Currently a columnist for “The Times of London,” her personal and political memoir, “Guardian Angel,” has been published by Bombardier, which also published her first novel, “The Legacy,” in 2018. Her work can be found at: www.melaniephillips.com