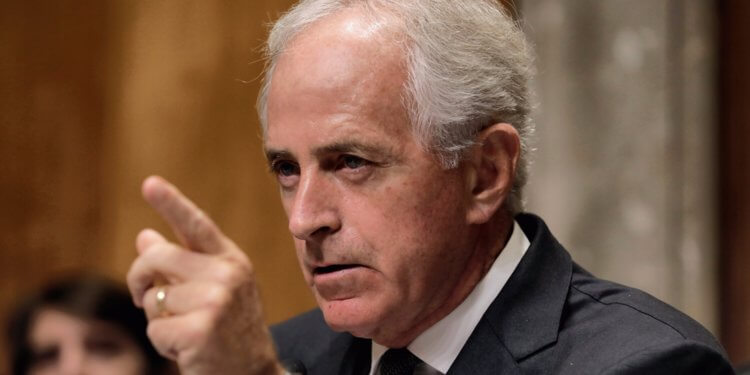 Sen. Bob Corker (R-Tenn.) announced Thursday that he will vote for Supreme Court nominee Brett Kavanaugh, after the judge testified in response to allegations of sexual assault.

Corker’s vote, along with Sens. Susan Collins (Maine), Lisa Murkowksi (Alaska) and Jeff Flake (Ariz.), has been uncertain throughout the confirmation process.

Corker is retiring from the Senate at the end of his term and has been one of the most vocal Republican critics of President Trump in the Senate.

In one memorable clash, Corker called the White House an “adult day care center” and in July warned that the president’s rhetoric was diminishing American influence around the world.

But on Thursday he praised Kavanaugh as a fit candidate to serve on the highest court in the land.

“There is no question that Judge Kavanaugh is qualified to serve on the Supreme Court, and in a different political environment, he would be confirmed overwhelmingly,” Corker said in a statement.

Corker’s announcement came after Christine Blasey Ford testified before the Senate Judiciary Committee about her allegations Kavanaugh sexually assaulted her when they were in high school.

Kavanaugh followed her testimony and vehemently denied that he assaulted Ford.

“I believe Judge Kavanaugh has conducted himself as well as anyone could expect throughout this process and plan to vote to confirm him,” he added.

Corker declined to tell reporters how he would vote as he walked to a meeting of the entire Senate Republican conference in the Strom Thurmond Room of the Capitol shortly after 7 pm.

Corker praised Ford for showing “courage” by testifying before the committee but he said Kavanaugh “deserves the presumption of innocence.”

“While both individuals provided compelling testimony, nothing that has been presented corroborates the allegation,” he said in his statement.

Republicans said they intend to move forward with a committee vote for Kavanaugh Friday. Corker is not a member of the committee but Flake, who is a member, has not indicated how he would vote.