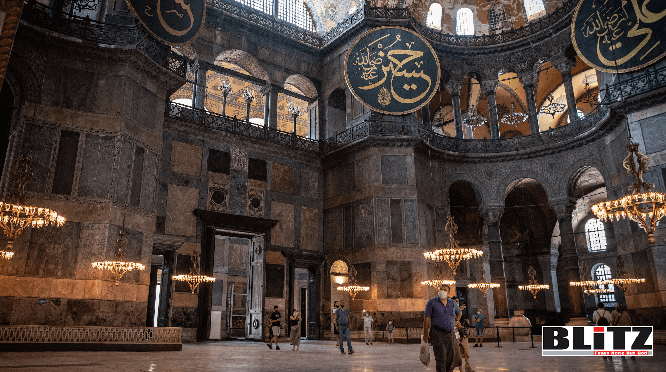 The U.S., Russia, Greece, the E.U., the Ecumenical Patriarch of Constantinople Bartholomew, the Patriarch of Moscow and all Rus’ Kirill, even the left-leaning Israel-demeaning World Council of Churches and many others, have expressed various degrees of “grief and dismay” at the announcement by Turkish President Erdogan that from now on, Hagia Sophia would no longer be a museum, as the secular statesman Ataturk had made it in 1935, but would “revert” to its status as a mosque. One voice, that of Pope Francis, was not in the immediate chorus, but then as one after another of political leaders and religious groups criticized the move, the Pope at last added his voice, saying – with a pained expression on his face — that the Turkish move had “distressed” him. Was that really enough? Having been a defender of Islam, famously insisting despite all the evidence to the contrary that “authentic Islam and the proper reading of the Koran are opposed to every form of violence,” having embraced as a brother the head of Al-Azhar (and a noted antisemite), Ahmed al-Tayeb, in Abu Dhabi, the Pope could hardly be described as an Islamophobe, which would have made his objections to the “reversion”of Hagia Sophia from museum to mosque even more powerful. He could have said much more than that he was “distressed.”

Perhaps Pope Francis can, in a longer statement, sometime in the coming weeks, tell the world why he is “distressed.” Something like this, for example, would be welcome:

My thoughts go to Istanbul, and to Hagia Sophia, the most important church in Christendom for more than 900 years, from 537 to 1453, and then a mosque for 488 years, from 1453 to 1931. It was in 1935 that the Turkish state wisely made it into a museum where visitors could admire what is surely the summit of Byzantine art, and Christians and Muslims were able to share a sacred space instead of disputing over which believers should have sole possession. It was a place of openness and harmony between civilizations. Now that arrangement has been undone. There is no longer that possibility of an encounter of equals within the walls of what has been, successively, a church, a mosque, and a museum.

We worry, too, about the physical condition of the Byzantine mosaics. I have learned that five times a day, when Muslim daily prayers take place, the mosaics will be covered over by cloths. Covering and uncovering these delicate masterpieces so many times every day increases the chances of damage to them. We are fearful for their physical future. We implore the Turkish president to reconsider this decision, so that Hagia Sophia may continue to be a place for openness and fruitful encounters between Muslims and Christians, as it has been since becoming a museum in 1935.

This, or something very like this, won’t change Erdogan’s mind. But it will highlight for the world’s Catholics that something very wrong has taken place in Istanbul. And it might signal the beginning, at long last, of a change in attitude toward Islam by Pope Francis.

The most impressive response to Erdogan’s decision came from UNESCO, which is deeply concerned about any changes in status made to Hagia Sophia, a UNESCO World Heritage Site. The stern reaction of that organization is here.

The Director-General of UNESCO deeply regrets the decision of the Turkish authorities, made without prior discussion, to change the status of Hagia Sophia. This evening, she shared her serious concerns with the Ambassador of Turkey to UNESCO.

Hagia Sophia is part of the Historic Areas of Istanbul, a property inscribed on UNESCO’s World Heritage List. “Hagia Sophia is an architectural masterpiece and a unique testimony to interactions between Europe and Asia over the centuries. Its status as a museum reflects the universal nature of its heritage, and makes it a powerful symbol for dialogue,” said Director-General Audrey Azoulay.

This decision announced today raises the issue of the impact of this change of status on the property’s universal value. States have an obligation to ensure that modifications do not affect the Outstanding Universal Value of inscribed sites on their territories. UNESCO must be given prior notice of any such modifications, which, if necessary, are then examined by the World Heritage Committee.

UNESCO also recalls that the effective, inclusive and equitable participation of communities and other stakeholders concerned by the property is necessary to preserve this heritage and highlight its uniqueness and significance. The purpose of this requirement is to protect and transmit the Outstanding Universal Value of heritage, and it is inherent to the spirit of the World Heritage Convention.

These concerns were shared with the Republic of Turkey in several letters, and again yesterday evening with the representative of the Turkish Delegation to UNESCO. It is regrettable that the Turkish decision was made without any form of dialogue or prior notice. UNESCO calls upon the Turkish authorities to initiate dialogue without delay, in order to prevent any detrimental effect on the universal value of this exceptional heritage, the state of conservation of which will be examined by the World Heritage Committee at its next session.

“It is important to avoid any implementing measure, without prior discussion with UNESCO, that would affect physical access to the site, the structure of the buildings, the site’s moveable property, or the site’s management,” stressed Ernesto Ottone, UNESCO’s Assistant Director-General for Culture. Such measures could constitute breaches of the rules derived from the 1972 World Heritage Convention.

Could the Hagia Sophia now lose its World Heritage Site designation, because of Turkey’s breach of the rules governing such sites? Will the physical access to the building by non-Muslims be prevented, or severely limited, during the Five Daily Prayers, or will they be able to visit, as they do now, at any time? Will the enormous cloth coverings which the Turks intend to use to hide the Christian mosaics, so as not to offend Muslim worshippers at prayer, be both thick enough to conceal the offending Christian art, and also light enough so as not to damage those mosaics, especially if the cloths are going to be put up and taken down five times a day? How will they be affixed to the walls without damaging them? These are all questions for architects and conservators to consider. Will the Turks allow the world’s Christians to have a say, through the input of expert conservators and specialists in Byzantine art, in how those mosaics, that are the heritage of the Christian world, are to be covered, and then uncovered, so frequently, in order to minimize damage?

Could Erdogan at least concede to the world’s Christians the involvement of Western art experts in preserving the mosaics of Hagia Sophia? And if he doesn’t, UNESCO should consider removing Hagia Sophia from the list of World Heritage Sites. That removal would – as the international uproar over the building ‘s change in status has already done — damage the Turkish tourism industry, so vital a part of the economy on which Erdogan’s neo-Ottoman fantasies depend.