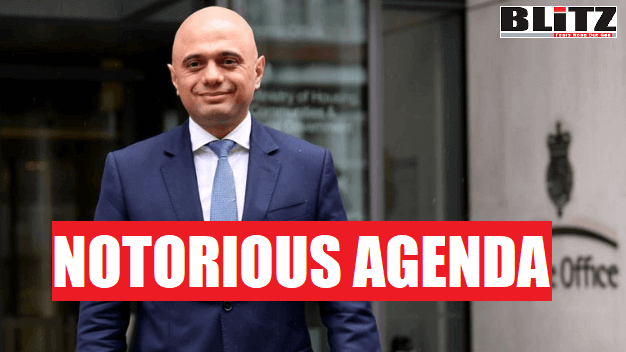 When Christian persecution around the world is reaching almost genocide and radical Muslims openly proclaiming of establishing Caliphate or Sharia rule in the non-Muslim nations, Britain’s Home Secretary Sajid Javid is proudly saying “Britain has resettled more refugees than any other EU state”, since 2016. He goes further saying, “Britain wants more refugees”.

According to Javid, who is the son of a Pakistani migrant, the UK government has announced that “it will resettle thousands more refugees starting from next year, and for years to come”.

Islamic supremacists waging their global jihad is driven underground via loud shouts of “Islamophobia”. While Muslims continue to victimize innocents globally, Westerners are being fooled into thinking that Muslims are the primary victims. Muslim victimization is primarily from their coreligionists where over 11 million Muslims have been murdered by Muslims since 1948. Not even 1400 years of jihad could convince the willfully blind about the nature of the jihad war on terror.  The general Western public is being duped, and Western leaders are selling their principles to buy votes at the polls.

A priest in France was also decapitated (during mass to boot) less than three years ago; but the French population — along with most others — have ‘forgotten’. Leftists and Islamic supremacists do not let anyone forget the tragic but isolated killings of Muslims, but they do however ignore the murder of Muslims by fellow Muslims, and the mass murders of infidels by Muslims.

The crime chaos and threat of jihad attacks arrived with the swarm of Muslim migrants from the Middle East and Africa. The Islamic State also made good on its promise to infiltrate the refugee streams. The UK Home Office announcement comes as Western-backed rebels with the Syrian Democratic Forces warn that there are “tens of thousands of Islamic State children in the refugee camps whose minds are poisoned”, warning that they could be “a danger to the world in years to come… a ticking bomb.”

All may not be lost however for the U.K. despite Javid’s enthusiastic announcement, not if Boris Johnson wins the U.K. leadership. The popularity of the Brexit party is also bad news for globalists. A major survey found that the UK public voted for Brexit because of the EU’s reckless immigration policy.

In an official video message uploaded to social media by the Home Office, Secretary of State Sajid Javid, a contender for Tory leader — and therefore Prime Minister — and former Remainer, boasted that, “Since 2016, Britain has resettled more refugees than any other EU state, something that we’re very proud of”.

The British Home Minister’s statement is disturbing enough especially at a time when the entire world is feeling threatened of return of the Islamic State fighters – most of whom are anticipated to be entering under disguise. Excessive flow of migrants into Britain would pose a serious threat to country’s national security as well.