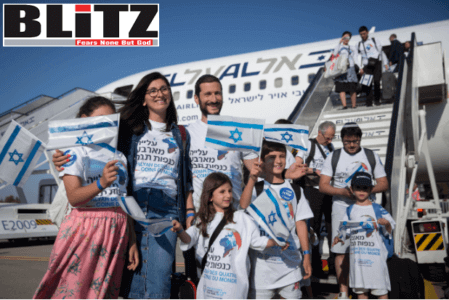 At the Charles de Gaulle Airport in Paris, a woman bade farewell to her sister, who in just a few hours would board a flight with her family and another 80 French Jews immigrating to Israel this summer.

As she saw her sister off in this annual season of aliyah, she declared that she, too, wanted to leave with her family in the next few years. Concerned with the rise of anti-Semitism in Europe, she told JNS (although was too nervous to have her name published) that her two children had previously been the targets of anti-Semitism at the Paul Eluard Middle School in Garges-lès-Gonesse, a township in the greater Sarcelles arrondissement (district).

“During their break, other kids drew swastikas in my kids’ schoolbooks,” she told JNS. “In our community, we have seen other anti-Semitic aggressions and harassments, including ones that involved knives.”

In 2017, at the township’s synagogue, a mob of about 20 young people shouted “Allahu Akbar” and “Screw the Jews,” one armed with a tear gas bomb and another trying to get into the synagogue by climbing a wall.

Nicknamed “Little Jerusalem,” the Sarcelles district is known for its large population of Jewish residents, with public housing expanding there in the 1950s and 1960s due to French and Jewish Algerians who fled there as a result of the Algerian War of Independence.

Community president Moise Kahloun moved to Sarcelles in 1969 from Tunisia and has since seen a marked difference in anti-Semitism in the last several years. He reported “many problems,” including “anti-Semitism and fear,” which has made it a different city than it had been in the past 40 years.

Although there are not acts of anti-Semitism on a daily basis, said Kahloun, since 2014, residents do feel “anti-Semitism on a day-to-day basis.” In the psyche of Jews living in Sarcelles, he explained, “there was before 2014 and after 2014,” referring to the most violent anti-Semitic riots that occurred in 2014, which aligned with the war between Israel and Gaza.

“The younger generation of Arabs makes a transplant of the Israeli-Palestinian conflict; they believe that Jewish and Israeli is the same thing,” said Kahloun. “When violence rises in Israel, so, too, does violence rise in Sarcelles. Immediately, we feel it here, and [the police] put more security here.”

“Arab residents burnt down Jewish businesses, and there was a violent demonstration at the synagogue, where they tried to burn it down,” he said. “What hurt most is that us Jews and Arabs all grew up together.”

From the early 2000s until today, the community has decreased from 18,000 Jews to no more than 13,000, largely due to the increasing trend of French making aliyah—emigrating to Israel. At the same time, as synagogues in small towns outside of Sarcelles shut down, many families are moving to the area.

Kahloun posed that other cities look up to Sarcelles as a model for Arab-Jewish relations and reported never taking off his kipah (Jewish skullcap) on the streets of Sarcelles, feeling “safer here than other areas of Paris.”

Jewish communal leader Simon Midal, who made aliyah last month, told JNS that this type of Jewish community formation, which he called a “ghettoization,” is “a logical flaw of what’s happening in France.”

Ouriel Gottlieb, director of the Jewish Agency in France, maintained that as a representative of Israel, his role is “to support, strengthen and give a source of pride to Jews in France, while also promoting and encouraging aliyah.”

For many, because of the strong community and support of organizations, they are happy as Jews in France. Eli Dan, a 27-year-old medical student living in a suburb near Paris, goes to the Relev community center, housed in the Adas Yereim synagogue, twice a week “because we can eat kosher here, work late, it’s quiet, and you have everything you need.”

While Dan acknowledged that “anti-Semitism has gotten worse, especially in public schools,” he said “France is my home.”

Midal reported that his children, too, feel more at home in France and were surprised at their parents’ decision to leave for Israel after all the work they have done for the community.

Aliyah from France has decreased in the last few years. In 2011 and 2012, a little more than 1,900 French Jews relocated to Israel per year. In 2013, following the Toulouse shootings at a Jewish school, aliyah nearly doubled to 3,262. In 2014, following the riots in Sarcelles, 6,658 people made aliyah. The next year, 2015, following the Hyper Cacher kosher supermarket siege, a peak of 7,469 French Jews left for Israel.

“Thousands of people called the day after that attack, asking about aliyah,” said Gottlieb.

“People inside still feel there is danger, but now they say ‘we are OK, but tomorrow, if, God forbid, there is another attack, we want to know the information [about how to make aliyah],’ ” maintained Gottlieb. But even with “fear behind it,” he explained, “it’s still an aliyah of choice.

Nobody is fleeing,” he said, adding that the decision to make aliyah also involves a great deal of Zionist ideology. “French Jews are Zionist at the core,” he said. “This is the context.”

For now, things are holding steady, agreed Kahloun, who noted that Arabs and Jews interact on a daily basis in Sarcelles, with relations that are “distant but good” among the older generation. Recently, when there was an anti-Semitic incident in one of Sarcelles’s supermarkets, Jewish and Arab leaders in the area came together to figure out how to deal with it.

“This is a symbolic community,” he said, “and if something happens in Sarcelles, it will happen everywhere in France.”