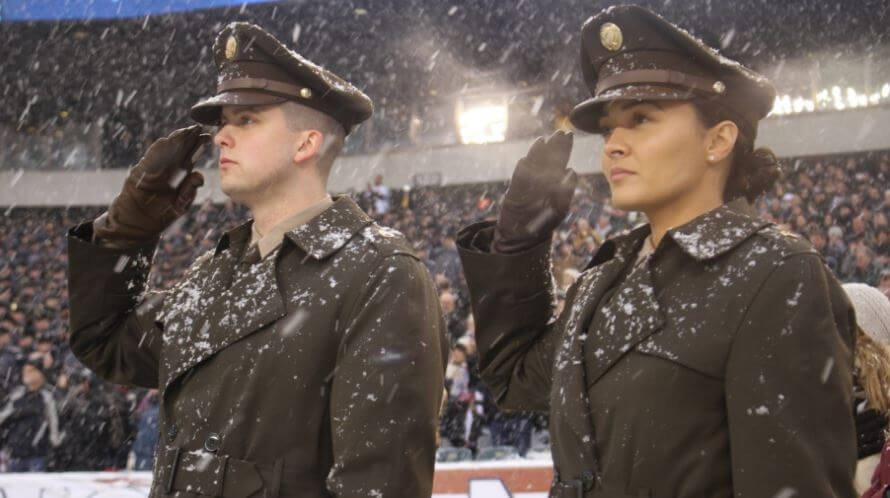 The uniform worn by the World War II Army — “Army Greens” — was adopted Sunday as the service’s new service uniform.

Army officials have been discussing adoption of the retro-style uniforms with pinkish-brown trousers and dark olive jackets, known as “pinks and greens,” for months, as part of an effort to link soldiers to the service’s history.

The uniforms were presented by Program Executive Office Soldier at the Association of the United States Army’s annual exposition in Washington, D.C. last year and had the support of the Sergeant Major of the Army Dan Dailey, who wore a prototype at the Army-Navy game last December.

The new uniform, which officials said would be “cost-neutral” to enlisted soldiers and would not come at an added cost to taxpayers, is expected to be fielded to soldiers reporting to their first units beginning in summer 2020. All soldiers will be required to have the uniform for wear eight years after that.

“The current Army Blues Uniform will return to being a formal dress uniform, while the Army Greens will become the everyday business-wear uniform for all soldiers,” the service announced in a press release timed to coincide with Veterans Day celebrations. There will be no change to the Army’s field uniform, the release said.

Many consider the pinks and greens the sharpest uniform in Army history, and it appears to have support among a large number of soldiers. An Army Times survey found more than 70 percent of respondents favored the idea of returning to the WWII uniform.

Some soldiers have voiced reservations, however, about adding yet another dress uniform to their wardrobe.

In late 2017, troops at Camp Zama in Japan told Stars and Stripes they had concerns about buying another new outfit so shortly after the Army phased out green office clothes and an older blue dress uniform two years earlier.

Enlisted soldiers will be able to purchase the new uniform with their annual clothing allowance, officials said in Sunday’s announcement.

Female soldiers will be able to choose from versions with a skirt or pants. They will have additional shoe options, too.