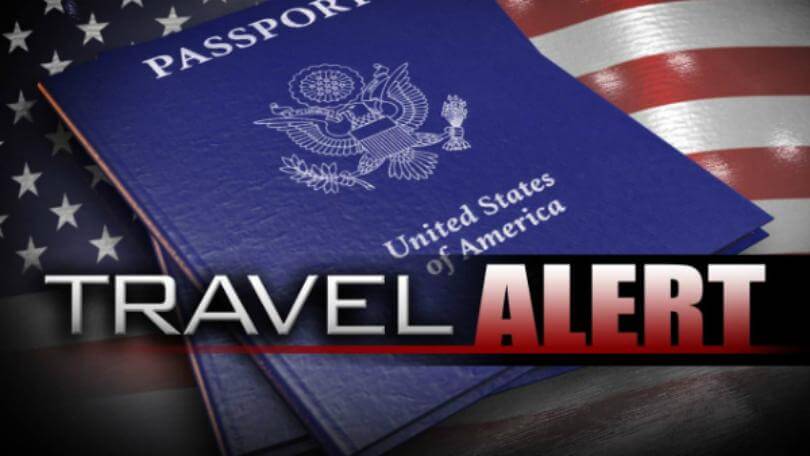 United States embassy in Dhaka (Bangladesh) has issued travel alert suggesting all U.S. citizens to obtain a visa before traveling to Bangladesh.

In the statement, the US embassy said, “Recently, some U.S. citizens, particularly ones born outside the United States, have been denied entry into Bangladesh despite believing they had fulfilled the requirements for a visa on arrival.  If friends or family members intend to visit you in Bangladesh, we strongly recommend they obtain a visa before arrival.

“Please remember the authority to permit or deny entry to Bangladesh rests solely with Bangladeshi officials, and there is little to no assistance the Consular Section can offer to these travelers.”

It may be mentioned here that the relations between Dhaka and Washington has recently turned bitter following a statement issued by the US State Department on December 21, 2018. In the statement, the US State Department said, “The United States is disappointed by the Government of Bangladesh’s inability to grant credentials and issue visas within the timeframe necessary to conduct a credible international monitoring mission to the majority of international election monitors from the Asian Network for Free Elections (ANFREL), which the United States funded through the National Democratic Institute. As a result, ANFREL was forced to cancel its observation mission for the December 30 national election. The lack of an international observation mission makes it even more important for the Government of Bangladesh to complete the accreditation of all the local NGOs that constitute the Election Working Group, which includes some funded by USAID, so they can conduct the vital work of monitoring the election.

“In the lead up to any democratic election there must be space for peaceful expression and assembly; for independent media to do its job covering electoral developments; for participants to have access to information; and for all individuals to be able to partake in the electoral process without harassment, intimidation, or violence. We encourage the Government of Bangladesh to uphold its commitment to a democratic process by ensuring all Bangladeshis are free to peacefully express themselves and participate in December 30 election.‎”

Robert Palladino, Deputy Spokesperson for the US State Department issued the statement.

In response to the statement issued by the US State Department, Bangladesh Foreign Ministry on December 23, 2018, in a statement said, “Bangladesh is disheartened to see a Press Statement issued by the United States Department of State on 21 December 2018 on the upcoming National Parliamentary Elections to be held in a festive atmosphere on 30 December 2018 which is being participated by all registered political parties in the country. The election is being conducted by the Bangladesh Election Commission, which is a constitutional body and independent in the exercise of its functions.

“In this context, the decision of ANFREL to cancel its observation mission is entirely their own despite the fact that, nearly half of its applicants have already been approved and the rest is under process.

“It is noteworthy that ‘Odhikar’, an NGO of Bangladesh, is the founding member of ANFREL. ‘Odhikar’ is widely known for its disproportionate bias and prejudice against Bangladesh, in particular the government of Awami League, which is evident in its various reports including the recent ones published in October and December 2018. Besides, one of the top-ranking Bangladesh members of ‘Odhikar’ was earlier appointed by the BNP-Jamaat Government as the Deputy Attorney General, which provides ground for disqualification of his organization and related entities as independent and neutral observer of the national elections.  It may be mentioned here that, under Section 91 (C) (1) of the Representation of the People Order 1972, the Commission is supposed to ‘permit a person as election observer who is in no way associated with or affiliated to any political party or contesting candidate and who is not known for his sympathy, direct or indirect, for any particular political ideology, creed or cause or for any manifesto, program, aims or objects of any political party or contesting candidate’.

“As one of the largest democracies in the world and mutually respectful to others, Bangladesh would expect and welcome constructive statements towards its democratic process from its friends and partners.

“It is reiterated that Bangladesh would continue to grant credentials to eligible international and local election observers to observe the 11th National Parliamentary Elections to be held on 30 December 2018.”

On the same day, Bangkok-based the Asian Network for Free Elections (ANFREL) in a statement said, “The Asian Network for Free Elections (ANFREL) expresses dismay with the manner in which the Bangladesh authorities have handled the accreditation application process for domestic and international election observers in Bangladesh’s 11th General Elections  (Jatiya Sangsad) to occur on December 30, 2018. While the Bangladesh Election Commission (BEC) has taken initiatives to welcome intergovernmental organizations, non-governmental organizations such as the ANFREL and several domestic monitoring groups either faced significant delays in their accreditation or were barred altogether from monitoring the upcoming elections. Together with the BEC, the Ministry of Home Affairs (MoHA) and the Ministry of Foreign Affairs (MoFA) also took part in the assessment of accreditation applications.

“Due to significant delays in the accreditation approval by the BEC and visa approvals by the MoFA, ANFREL is forced to terminate its observation mission in Bangladesh on December 22.  ANFREL formally requested accreditation for the elections as early as November 4, 2018 and submitted all necessary accreditation requirements to the BEC by November 26, 2018. As of December 21, 2018, a mere nine days before the elections, ANFREL was granted accreditation for only 13 of its observers out of the 32 applications it submitted. We regret that this situation hindered us from directly working with the Bangladesh election stakeholders, which ANFREL has been looking forward to.

“ANFREL is among the endorsers of the Declaration of Principles and Code of Conduct for International Election Observers (DOP).  DOP endorsers are expected to uphold and advocate the principles of total impartiality, independence, and freedom of movement and full access to information, in all stages of the elections. The DOP also states that countries should issue an invitation or otherwise indicate their willingness to accept international election observation missions “in accordance with each organization’s requirements sufficiently in advance of elections to allow analysis of all of the processes that are important to organizing genuine democratic elections.” With ANFREL’s withdrawal, no DOP-endorsing organizations will monitor the upcoming elections in Bangladesh.

“ANFREL also is concerned with the high number of domestic election observers that have not received accreditation.  It has been reported that there are only 34,838 observers who have expressed interest to participate as of December 19. A BEC official relayed that of this number, only around 26,000 observers will be granted accreditations. The 2018 elections marks the second lowest number of observers in two decades, just behind 2014 elections where only 8,878 domestic observers and 4 foreign observers participated. In comparison, there were around 159,000 observers for the 2008 elections, and  218,000 in 2001. All election stakeholders should therefore endeavor to encourage participation of observers in future elections.

“Unfortunately, other member organizations of the Global Network of Domestic Election Monitors (GNDEM)also have been denied accreditation by the BEC due to allegations of partisanship or their association with human rights groups and independent election monitoring networks. The presence of election observers is a crucial indicator of the level of transparency and public confidence in the elections. Placing hurdles for observers to access information, restricting their movement, and  hindering them from performing their mandate to promote democratic practices calls into question the sincerity of the Bangladesh authorities to hold transparent elections. We condemn all actions which impede the freedoms of civil society organizations.

“With ANFREL’s withdrawal, the organization registers its doubts regarding the integrity of the elections, especially with the reports on civil society restrictions and arrest of numerous opposition members. With the absence of foreign monitoring organizations, the very important task of documenting and assessing the the conduct of elections falls solely on the shoulders of domestic organizations. These are organizations operating in an extremely repressive political environment that is not conducive to free civil society activities. ANFREL extends our solidarity with the Bangladeshi civil society actors as they bravely perform their duties, especially in this tense campaign. We express support in their advocacy to achieve truly participatory and inclusive political processes in Bangladesh.

“Genuinely democratic electoral processes place a premium on human rights. ANFREL calls on all domestic stakeholders to collectively ensure secure and peaceful elections, using every opportunity to mitigate violence — no matter the outcome of the election. We ask the Bangladesh Government and the BEC to enforce the rule of law impartially and to ensure the safety and security of all electoral stakeholders. Furthermore, ANFREL calls on the political parties to abide by a code of conduct which befit the dignity of future leaders.

“Finally, ANFREL calls on the international community to monitor the welfare of election observers and civil society actors in Bangladesh. ANFREL hopes that Bangladesh electoral and civil society organizations will not be sidelined and that the restrictive environment in which they operate will be addressed and remedied.”