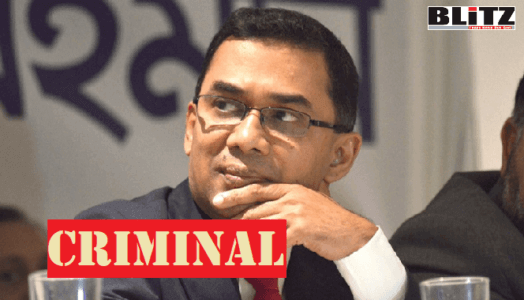 Following a confidential cable dated November 3, 2018, sent by US ambassador James F. Moriarty, the United States’ State Department has imposed restrictions on the entry of the controversial leader of Bangladesh Nationalist Party (BNP) Tarique Rahman under section 212(f) of the Immigration and Nationality Act, Presidential Proclamation 7750.

The Embassy is seeking a security advisory opinion under section 212(f) of the Immigration and Nationality Act, Presidential Proclamation 7750, suspending the entry into the United States of Tarique Rahman (aka Tarique), born on November 20, 1967 in Bangladesh. The Embassy believes Tarique is guilty of egregious political corruption that has had a serious adverse effect on U.S. national interests mentioned in Section 4 of the proclamation, namely the stability of democratic institutions and U.S. foreign assistance goals. The Embassy is not seeking to apply a 212(f) finding to Tarique Rahaman’s wife, Dr. Zubaida Rahman, to their daughter, Zaima Rahman, or to his mother Begum Khaleda Zia, a former Prime Minister of Bangladesh. The following provides the information requested in Ref A.

Tarique Rahman is a notorious criminal

Commenting on BNP’s fugitive leader Tarique Rahman, a source inside the US State Department told this correspondent that they have records about Tarique’s numerous forms of criminal activities as well as his direct involvement in massive corruption and nepotism.

It said, “Right of entry into the United States for individuals like Tarique Rahman deserved to be suspended for indefinite period”.

Earlier, Tarique Rahman told a representative from the United States that he was unwilling to return to Bangladesh in the near future.