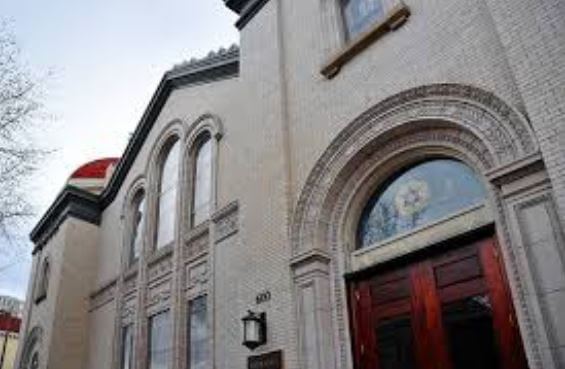 As Israelis took refuge in bomb shelters (again), and Palestinians celebrated in the streets as Hamas and Palestinian Islamic Jihad rockets flew overhead, one of the oldest synagogues in Washington, D.C.—the Sixth & I Historic Synagogue—spread the calumny that Israeli victims and Palestinian aggressor are one and the same.

On the evening of May 7, when Jews around the world commemorated Yom Hazikaron (Israel’s Memorial Day), which honors the memory of the thousands of heroes who have died defending the Jewish state, Sixth & I—a “non-denominational, non-membership, non-traditional Jewish synagogue” in downtown Washington—sponsored a very different memorial event: the “Israeli-Palestinian Memorial Day Ceremony” for Israeli and Palestinian “victims” of the Israeli/Arab conflict.

This alternative memorial day requires the Jewish community to mourn its own tormentors, threatening to destroy a commemorative Jewish holiday that expresses our unity in conveying our respect and gratitude for those who made the ultimate sacrifice so we could live on. Among the Palestinian dead that Sixth & I believes we should mourn are terrorists, suppliers of terrorists, enablers of terrorists, those who celebrate terrorists, and those who do nothing more than quietly approve of and vote for terrorists.

Would Sixth & I hold a ceremony honoring the memories of the 9/11 terrorists together with their victims? Honoring the Taliban and Al-Qaeda terrorists who educated, trained and equipped the 9/11 terrorists and have since died fighting our soldiers in Afghanistan? After all, they, too, left families behind. When Boston Marathon bomber Dzhokhar Tsarnaev is executed, should we mourn him, too, along with his victims?

What about the Nazis who died fighting the Allies in World War II? Would Sixth & I hold a memorial ceremony for them on Remembrance Day?

Make no mistake about it: Diluting our memorial observances destroys them and snips some of the threads that hold us together as a people.

What on earth is the matter with us? What kind of demons are these rabbis trying to exorcise? What this synagogue is doing is akin to what the young Jewish miscreants in IfNotNow did when they recited Kaddish for Hamas terrorists. (See also “Dozens of London Jews say Kaddish for Palestinians killed in Gaza.”)

Arabs have started every war against Israel in the past 71 years, and Palestinian Arabs have perpetrated countless terrorist attacks against civilians. More than 24,000 Israeli Jews have given their lives to establish a Jewish homeland in Israel and safeguard it for all Jews. We are the recipients of this gift that is Israel—this gift that came at such a heavy price.

The hundreds of rockets fired from the Gaza Strip last weekend were all fired at civilian targets, with no military objective, and thus constituted war crimes. To equate the Israeli victims of such attacks—both those who died fighting to protect their country and those who died because they were not able to make it to a bomb shelter in time, and those who died trying to murder Israelis, or who in some measure celebrated, encouraged or enabled the murder of Israelis—is depraved.

Judaism is all about making distinctions: between the impure and the pure, between right and wrong. The Sixth Commandment says: “Thou shalt not murder.” It does not say thou shalt not kill. There are many examples of moral killing, and Israelis are forced to confront them virtually every day: killing to protect the Jewish homeland from attack or killing to prevent an innocent person from being murdered are just two examples.

The program at Sixth & I placed Palestinian aggressors on the same moral plane as their martyred victims.

The rabbis at Sixth & I, both of whom are on the J Street Rabbinic Council, have responded to criticism of their program by saying that of course they support Israel. But words are cheap. The fact that they have not scheduled any programs to celebrate Israel’s 71st anniversary, but hosted this Israeli-Palestinian memorial program, is telling. That the program was sponsored by the New Israel Fund (NIF), an NGO that funds organizations that demonize Israel, supports anti-Israel boycotts and delegitimizes Israel, is even more telling.

Both J Street and the NIF constantly insist that they are pro-Israel, but rarely, if ever, support actions taken by Israel to defend its people or find anything praiseworthy to say about America’s only democratic ally in the Middle East.

Carol Greenwald is the treasurer and Robert Samet the chairman of Coalition of Pro-Israel Activists.