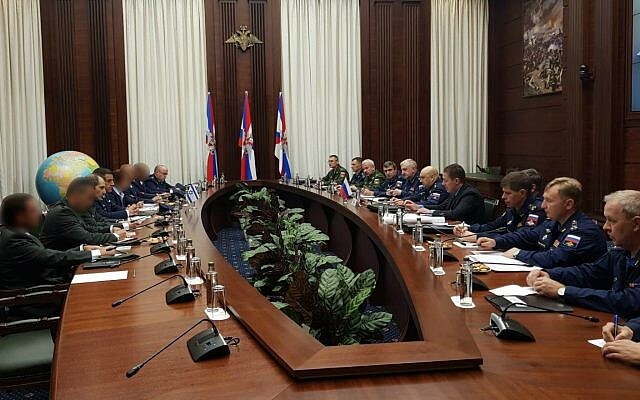 “Improvements” may be made to the Israeli military’s coordination with Russia over its operations in Syria in light of the downing of a Russian spy plane earlier this week, a senior Israeli army official said Friday. For now, he stressed, the deconfliction mechanism used by the two countries to coordinate activities was continuing to function effectively.

The official said an Israeli military delegation had answered Russia’s questions over Monday’s incident, including debunking the false notion that the Israeli jets had hidden behind the Russian plane. Israel also clarified that its attack planes had left the area before the Syrians fired the missile that downed the Russian plane.

He also said Israel notified the Russians ahead of the strike, and not a minute before as Moscow had originally claimed. And he dismissed a pro-Hezbollah newspaper’s claim Friday that Russia had refused to accept Israel’s explanations over the incident, for which Israel firmly blames Syria.

On Thursday, an Israeli delegation led by Air Force chief Maj. Gen. Amikam Norkin visited Moscow in order to brief Russian officials on Israel’s initial investigation of the incident, in which a Russian reconnaissance plane, with 15 crew members on board, was shot down by Syrian air defenses following an Israeli missile strike on a Syrian weapons facility on Monday night.

During their meetings in Moscow, Norkin’s delegation told their Russian counterparts that the Syrian military fired more than 20 anti-aircraft missiles in response to the Israeli attack — a comparatively large number for this type of scenario. Four Israeli F-16 fighter jets were said to have taken part in the airstrike.

In addition, the senior military officer said the majority of the surface-to-air missiles fired by the Syrians — including the missile that hit the Russian spy plane — were fired after the Israeli jets had left the area.

“Most of those 20 were fired while all of our planes were already in Israeli airspace and on their way to land. We proved how the Syrians’ reckless anti-air fire was the direct cause of hitting the Russian aircraft,” the officer said.

The delegation also refuted the Russian military’s initial claim that the Israeli pilots used the Russian Il-20 spy plane as a “shield” during their attack.

“We emphasized that there is no merit to the theory that this was an Israeli provocation or that Israeli airplanes made any use of the Russian airplane as cover. We debunked that false story,” the officer said.

The senior official added that the Israeli jets were “nowhere near the Russian plane when it was shot down.”

He also refuted a claim made by the Russian military and defense minister that the IDF gave less than a minute’s notice before carrying out the attack. The officer would not say precisely when the Russians were notified, but “we definitely gave a warning time much longer than one minute, we acted in accordance with the standard operating procedures that are in place with the Russian military, this time as we have done before.”

Despite the IDF’s insistence on its innocence, the incident initially threatened Israel’s coordination efforts with Russia — known as the deconfliction mechanism — which is meant to prevent such clashes and inadvertent casualties.

However, the senior official, speaking on condition of anonymity, said the hotline between the Israeli and Russian militaries has continued to operate as normal, though some “improvements” may be made in the future.

For now, there are “no changes to the deconfliction mechanism,” the officer said, adding “but both sides will use this opportunity to make adjustments.”

According to the officer, the deconfliction mechanism was used as recently as Friday afternoon. He refused to comment on the nature of the operation that required the coordination, saying only that it was not an airstrike.

“It is of paramount importance to us that we continue to use the deconfliction mechanism, which has proven over the past two-and-a-half to three years to be effective,” the officer said.

Israel routinely conducts operations against Iran-linked targets in Syria. Were Moscow to refuse to cooperate with Jerusalem, these efforts could become far more difficult and complicated for the Israeli Air Force.

“Our freedom of movement is paramount,” the officer said.

The senior official denied a report in a Hezbollah-linked Lebanese news outlet Friday, which claimed that Russian officials refused to accept the Israeli delegation’s findings.

“Our impression is that the discussions were professional and that the information was accepted,” the officer said.

The Israeli military delegation, made up of officers from the Air Force, Military Intelligence, international cooperation unit, Operations Directorate and the General Staff, returned from Moscow on Friday morning.

“We presented our data and findings. They were received. Our Russian counterparts had questions; those questions were answered,” he said.

The officer said the presentations focused on three main points: expressing sympathy for the loss of life; sharing intelligence on Iran’s activities in Syria; and presenting the findings of the military’s after-action review.

In addition to the Israeli delegation’s meetings in Moscow, the IDF also briefed the Russian military attaché in Israel on the matter.

“The Russians were also invited to come to Israel if there are any future questions,” the senior official said.

Upon landing back in Israel, the delegations briefed the political upper echelon on their meetings, the senior officer said.

The Prime Minister’s Office confirmed that the premier met with Norkin’s delegation and the IDF’s top brass to hear about the Moscow meetings.

“The prime minister ordered that the constant contacts with Russia continue,” his office said.

The downing of the plane sparked a flurry of condemnation from Moscow, forcing Israel to go on a full diplomatic push to resolve the issue.

In a highly irregular move, the IDF acknowledged conducting the Syria strike. Senior Israeli ministers also held phone calls with their Russian counterparts, and Norkin’s delegation was dispatched to Moscow to present Israel’s version of events in person.

Russian President Vladimir Putin said he did not directly blame Israel for the downing of the spy plane and instead credited it to a “chain of tragic accidental circumstances.”

However, he warned Prime Minister Benjamin Netanyahu in a Tuesday phone conversion that Israel should “not to allow such situations in the future,” and other parts of the Russian government have maintained a harsh line with Israel over the incident.

“Moscow views as irresponsible and unfriendly actions of Israeli Air Force, which exposed Russian Il-20 aircraft to danger and lead to death of 15 servicemen,” the Russian embassy in Tel Aviv wrote in a scathing statement on its Twitter account.

The Russian foreign ministry on Thursday urged “further inquiries and explanations from Israel,” according to the Russian Interfax agency.

Defense Minister Avigdor Liberman earlier on Thursday said, during an interview on Army Radio, that despite Russia’s ire over the incident, Israel would continue to operate in Syria in order to fight Iran’s activities in the country.

“We will do everything, everything that is required, in order to defend the security of Israeli citizens. On this issue we have no other alternative,” Liberman said.

Like Loading...
Continue Reading
Advertisement
You may also like...
Related Topics:Russian militaries has continued to operate as normal, Russian plane was shot down by Syrian air defenses, This opportunity to make adjustments