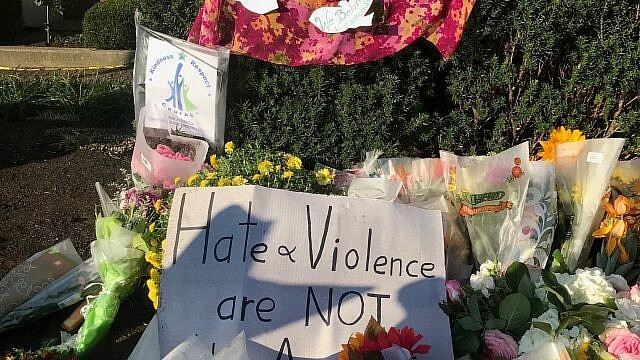 Jews are divided on many issues. But there is probably no more foolish or self-defeating argument roiling contemporary Jewish life than the question of which types of anti-Semites are most to be feared.

In recent years, how you answered that question tended to be a function of your politics more than anything else. For liberals, anti-Semitism was the work of the traditional far-right, with Jew-hatred of the left an afterthought at best. For conservatives, it was just the opposite, with their focus being on the hatred for Jews emanating from left-wing elements, while right-wing anti-Semites were dismissed as an insignificant threat.

But in the wake of the Oct. 27 slaughter of 11 Jews while they were at Shabbat-morning services in Pittsburgh, the discussion about which kind of hate is more dangerous has taken on a new urgency. The fact that an extremist anti-Semite acted on his twisted beliefs has made it impossible to ignore the threat from the right anymore. Unfortunately, however, it has—as almost everything inevitably does these days—turned into a political argument about whether U.S. President Donald Trump should be blamed for it.

The debate over whether Trump’s rhetoric is not merely part of the coarsening of our political culture but somehow encouraged a person to kill Jews—a person who despised him for his closeness to Jews on staff and as part of his family—is deeply unfortunate. Yet it also masks a more important discussion about whether one type of anti-Semitism is more deadly for Jews than the other.

The dilemma for the Jewish community is that partisans have become too deeply invested in the answer to encourage clear thinking.

The focus on the threat from the radical right has long been the instinct of most Jews. The reason why the rallies in Charlottesville, Va., by a few hundred neo-Nazis and members of the Ku Klux Klan was so frightening to most Jews is because their torchlight parade seemed to step right out of a nightmare about the Holocaust. It also resonated because it jived with a view of history in which Nazis and their latter-day imitators on the far right serve as the principal engine of anti-Semitism.

The romantic prism through which many Americans viewed socialism or even communism due to the excesses of the McCarthy era tended to make it harder to focus on the rise of a noxious anti-Semitic left separate from the old Stalinist foe. It was only once this antagonism became harder to avoid with the rise of a BDS movement, whose ideology was indistinguishable from anti-Semitism, that the organized Jewish community began paying serious attention to this source of hate.

For too many liberals, acknowledging that the threat from the left involves large groups with mass followings, including minority communities, has been a difficult concession.

If you are ready to face the fact that BDS is a form of anti-Semitism that targets Diaspora Jews more than Israel, then that means coming to grips with the fact that former allies on the left, whom many liberals still view with sympathy, are really enemies. The growing numbers of those who embrace this type of anti-Semitic incitement is linked to intersectional ideology—the current fashion among those on the left within the Democratic Party.

Similarly, many Jews just have a hard time coming to grips with the fact that one of the country’s leading hatemongers is the head of the Nation of Islam, Louis Farrakhan. Only this week he was in Tehran, inciting an Islamist crowd against the United States and Israel. He also recently referred to Jews as termites.

Farrakhan has a mass following with hundreds of thousands of sympathizers and admirers, among whose number can be counted the leaders of the Women’s March—the group that has been organizing popular mass marches against Trump.

Still, that hasn’t stopped people like former President Bill Clinton from sharing stages with Farrakhan or the Ben & Jerry’s ice-cream company from diverting revenue from the sale of its new “PeCAN Resist!” flavor to the Women’s March.

Seen from that perspective, left wing anti-Semitism is clearly espoused by greater numbers than their counterparts on the right.

Yet liberals aren’t the only ones who haven’t been thinking clearly.

In terms of numbers, far-right groups like the Nazis and the Klan are tiny by comparison to their counterparts on the left. Nor have they the kind of influence or faux respectability among mainstream conservatives that BDS supporters and Farrakhan have maintained.

These groups seemed to be relics of the past that no longer presented the kind of danger to Jews or Israel that the intersectional left posed. The noise they made on the Internet was sometimes put down as merely a function of the way modern technology has empowered extremists since they now had virtual communities that made them feel less isolated.

But the resurgence of the far right cannot be denied. Their ability to draw inspiration from mainstream debates about issues like immigration has inflated the perception of their influence, even if their numbers may remain very small.

Moreover, as Pittsburgh should have taught us, even a tiny group of extremists or a single armed lunatic inspired by hate can inflict unbearable suffering.

In facing up to both of these threats, it is vital that Jews not succumb to hysteria about the strength of anti-Semitism in the United States. Both forms of Jew-hatred are marginal. Nor should, as happened after Pittsburgh, either side try to weaponize anti-Semitism in order to score points in political battles.

That said, the notion that either one side or the other should be our sole focus at a time when all forms of anti-Semitism present a clear and present danger is the real blunder. It’s high time for Jews on both sides of the political aisle to stop sparring over the past and unite to deal with an anti-Semitic virus that has found a home among extremists of all stripes.